**Due to the ongoing GSOC-UAW Local 2110 strike at New York University, we have decided to postpone this event indefinitely in solidarity with graduate student workers. We will notify registrants once the event has been rescheduled. Thank you for understanding.

To learn more about the strike and how you can support, visit: https://makingabetternyu.org

NACLA has provided incisive political economic and anti-imperialist analysis on Latin America and the Caribbean for more than half a century. Our commitment to untangling the role of the United States in the region and centering dissenting voices to understand politics and power in the hemisphere remains as important as ever. Building on NACLA’s rich history of covering climate change, anti-racism, and solidarity with Latin America and the Caribbean, this event series brings together activists, scholars, and journalists to inform our movements and shape our understandings of critical struggles in these unprecedented times.

This panel will be the second in a thematic series of panels celebrating our 54th anniversary and will feature scholars and activists who are grappling with the historical roots and contemporary manifestations of anti-Black and anti-Indigenous racism in the Americas. Panelists will answer the following questions: What is the meaning of anti-Black racism today and how does your work respond to the resurgence of racism and right-wing populism throughout the Americas? What role does the military, paramilitary, and police play in policing Black and Indigenous political movements? What does a hemispheric project of anti-racismo look like?

Pamela Calla is a Bolivian anthropologist engaged with issues of gender, race, class, and state formation in Latin America. She is currently a clinical associate professor at the Center for Latin American and Caribbean Studies at New York University.

Keisha-Khan Perry teaches racial and gender politics in Brazil at Brown University. Her book, Black Women against the Land Grab: The Fight for Racial Justice in Brazil (2013), focuses on urban social movements against forced land evictions. She is currently working on an historical ethnography of Brazil, Jamaica and the US.

Juliet Hooker is currently professor of political science at Brown University. She is a political philosopher who focuses on racial justice, contemporary political theory, and black and Latin American political thought. She has written multiple books and peer reviewed articles. Her latest publication is the collaborative edited volume, Black and Indigenous Resistance in the Americas: From Multiculturalism to Racist Backlash (2020)

Christopher Loperena is an assistant professor of anthropology at the Graduate Center of the City University of New York. His research examines indigenous and black territorial struggles and the sociospatial politics of economic development in Honduras. He is currently completing a book manuscript titled A Fragmented Paradise: Blackness and the Limits of Progress in Honduras. 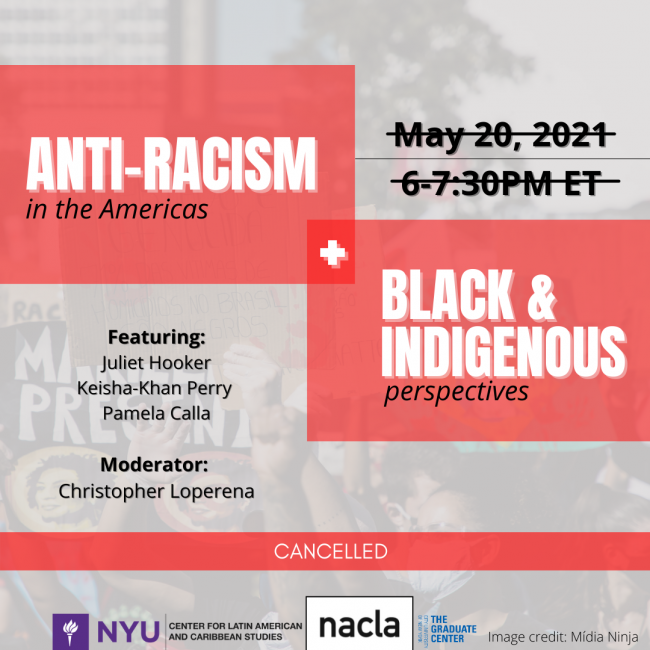