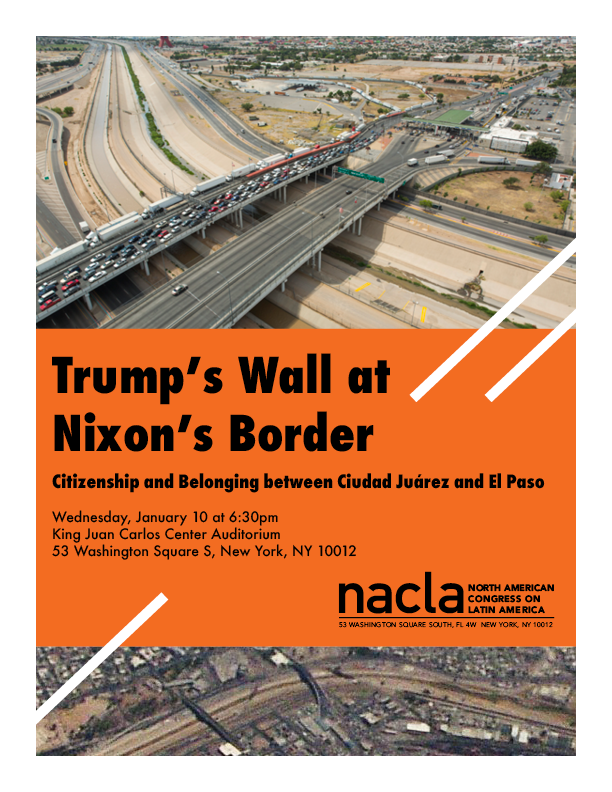 Wednesday, January 10 at 6:30pm
King Juan Carlos Center Auditorium
53 Washington Square S, New York, NY 10012
Admission is free and open to the public. Please RSVP on Facebook here.
Fifty years ago, Richard Nixon made closing the U.S. border to unwanted people and products from Mexico part of his successful 1969 campaign for the presidency. In 2016, Donald Trump’s calls to “build that wall” on the U.S.-Mexico border characterized his presidential campaign.  But many residents of El Paso, Texas, met the idea not with shock but with begrudging acceptance, while many newspaper headlines from neighboring Juárez screamed foul. Why? This talk suggests five decades of accommodation and resistance to U.S. drug, immigration, environment, and border policies have shaped citizenship and belonging in the transfrontier metropolis of Ciudad Juárez and El Paso. Adding a wall to the divisive repertoire of border practices casts in concrete what had already been achieved throughout late twentieth century border policing strategies: the divorce of Juárez from El Paso.
This presentation builds on an article from NACLA’s Spring 2017 issue, and is part of a book-length project of the border history of the upper Rio Grande Valley. Patrick Timmons holds a Ph.D. in History from the University of Texas at Austin and an LL.M. in International Human Rights Law from the University of Essex. Timmons lectures in History at El Paso Community College.