Gastropolitics and the Specter of Race: Stories of Capital, Culture and Coloniality in Peru (Review) 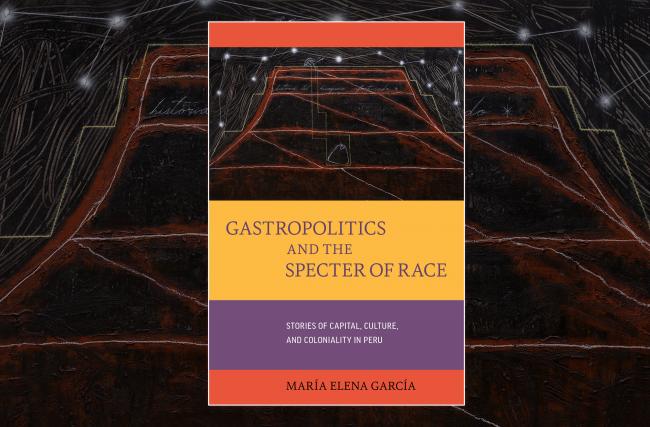 Gastropolitics and the Specter of Race: Stories of Capital, Culture and Coloniality in Peru is a courageous book. Those unfamiliar with Peru’s two decade long gastronomic boom may miss this critical point, and therefore, why this book is so important. More than a collection of essays critiquing celebrity male food culture, foodie elitism, global food marketing, and the nascent industrialization of guinea pigs, María Elena García’s wide-ranging book grapples with a boom that has been fêted universally. In newspapers, cookbooks, films, best-of lists, and across dinner tables, the tale of Peru’s food boom seems to inspire everyone. Expat Peruvian entrepreneurs open restaurants selling ceviche as much as their country of origin. Writers sell copy to an ever-growing list of digital media insatiable for Peruvian food. Artists lend their vision to stylize restaurant spaces, infusing the meal with just the right level of ethnic difference. And multi-national development officers salivate over the possibility of replicating Peru’s gastronomic success elsewhere. Everyone applauds Peru’s food revolution. Everyone except García, who lowers her hands and takes up the tale, fearlessly demonstrating how Peru’s gastronomic boom and food revolution has a much darker side. By spinning her counter-narrative that the food revolution is a masculinist, neoliberal, extractive project that perpetuates legacies of patriarchal settler colonialism, García has valiantly entered the ring to make room for others.

Food is not an easy target. Unlike copper, gold, or petroleum—some of Peru’s other profitable exports—food is deeply sentimental. Ingested and embodied daily, food has become a reason to live and to celebrate in Peru: a booster to the nation’s “self-esteem,” a source of pride, a tool to conquer other nations, an event to showcase migrant memories, and a sword to be wielded on a global victory lap of economic—if not existential—redemption. To counter, as García does so convincingly, that the food revolution’s love, passion, and belief is not all tangy ceviches and frothy piscos is no small feat. Indeed, a central rhetorical feature of the food boom’s economic strategy has been to marshal the production and consumption of food as a deeply moving, affective form of nationalism that threads home cooked meals, farming, childhoods, seafaring, maternal love, celebrations, and life to people’s identity and sense of country. The discourse is a potent and profitable elixir of nationalism, and tackling it is a little scary. Who really wants to be the nation’s biggest party pooper?

The book consists of two parts, each with three chapters accompanied by thematic interludes that serve as introductory essays. Part One, “Structures of Accumulation,” centers on the top guns—or top chefs, as they are—Gastón Acurio and Virgilio Martínez and the now defunct food festival, Mistura, that Acurio helped start. Part Two, “Narratives from The Edge,” focuses on alternative movements in the food boom and how the food boom’s gendered neoliberal narratives normalize violence toward human and non-human species alike.

The introductory chapter lays bare the ways in which Acurio’s food revolution is an insidious rejoinder to General Juan Velasco Alvarado’s presidency (1968-1975). Velasco’s efforts at equalizing Peruvian society through land tenure reform is a wound that refuses to heal and continues to evoke strong reactions today. García makes surprising and thoughtful connections the way only an insider whose family history was impacted by the reform could. She details the way that Acurio’s food revolution has been a tactic to promote neoliberal capitalism, usurping Velasco’s battle cry but not really the goal. Rather, the powerful branding of Peru as a food nation built on multicultural mestizaje (racial mixing) and tolerance only serves to keep everyone in place. It is an effort to return Lima to its days as a City of Kings, a vibrant, Hispanic, colonialist arcadia. The dominant racial-class category remains, and the colonialist hierarchy persists unchecked while profits soar. What is most beguiling, at least for me, about the food boom, is that in the celebration and recapitulation of the story intentionally crafted, branded, and sold to us by Acurio and others, we ingest this symbolic violence obligingly and even declare it good and tasty.

The next two chapters focus on Virgilio Martínez, his two restaurants Mil and Central, and the food festival Mistura, once held in Lima. Her description of Martínez’s work with the Indigenous communities that live alongside Mil in the town of Moray resonated deeply with me and my own work. Expeditionary science, whether in archaeology or culinary tours, can be a colonizing knowledge practice that usurps and extracts for transformation and profiteering. One discoverer might have been searching for a lost city in the Vilcabamba valley, but the other seems to be on a parallel expedition hunting for a lost tuber. Never mind that neither the ruins of Machu Picchu nor potatoes have ever been lost. Instead, they were simply unknown to the knowers that seem to count. In making their so-called discoveries, these knowers become the anointed, sacralizing the objects as patrimony, gilding their pockets and then giving sermons on how the objects should be used. Indeed, Martínez and Acurio are 21st century extensions in a long line of male discoverers, fictive kin relations in a system that structures and facilitates certain racialized subjects as knowers, whether it be through the rhetoric of love or ecological protection. Although everyone seems to pay lip service to Peru as a multicultural panacea that has produced abundant deliciousness, in their hands the gastronomic potency of Peru becomes a marvelous possession that eerily harkens back to the colonial encounter.

In the second half of the book, García attempts to show how people negotiate these powerful structures and stories. Her interviews with Aida, a representative for the National Association of Ecological Producers of Peru get to the heart of the double bind for many producers in a boom predicated on multicultural fusion that promises a profitable future for all. On the one hand, there is economic opportunity. On the other hand, there is little social inclusion, social parity, or effort for real mobility. Instead, producers remain invisible or, worse, “Indigenous traditions” that provide excellent food copy for marketing brochures and travel guides. Reworking the system is a frustrating battle, especially since the mostly rural and Indigenous food producers seem to be quite conscious of the fact that they are simultaneously a part and apart. The gastropolitical system benefits a few greatly but is predicated on disciplining subjects to remain in place to keep the story going.

The book ends with two stellar chapters focused on the unsettling rise of guinea pig production and how race and gender figure prominently in its promotion. The guinea pig, once a primarily Indigenous foodway, has become an ingestible national icon of modernity and symbolic reminder of the good taste of the food boom’s fusion gastropolitics. Drawing on a cartoon, a guinea pig fair, and a profoundly sexist guinea pig production workshop, García shows how “cuy talk” is deeply troubling, gendered, and depressingly pervasive. What I found so impactful about these two chapters was how a masculinist, racial national ordering that is deeply resonant with the boom specifically and with top chefs generally permeates into other fields and figures. From the vantage point of the guinea pig, Acurio’s love and Martínez’s wonder are nothing more than poison.

García closes the book with an exegesis on grief, death, and fieldwork. Although centered on dead guinea pig bodies, the disposability of some bodies, and the fragility of others, I wondered what else García grieved in the headiness of the boom. The loss of family connections resulting from her diasporic exile? Her own truncated upbringing in Peru? A city and country—if not world—that resembles less and less the promise of anyone’s revolution?

It takes guts to shake down male heroes, questioning their rules, realities, and success. It takes guts to poke a nationalist sentiment and risk an avalanche of unsettling emotion and familial backlash. It takes guts to question good times, good feelings, and success in a nation that has experienced more than its fair share of suffering. García does it, but not out of malice. Hers is not an ax to grind, though I imagine some readers might dismiss the claims in the book as such. Instead, I got the sense that she is driven by her own love of country, the country of her dreams, which she desperately wants to help realize.

Amy Cox Hall is the author of Framing a Lost City: Science, Photography and the Making of Machu Picchu, and is currently at work on her second book, The Taste of Nostalgia: Gender and Culinary Technologies of Modernity in Peru.