Months after the peak of Guayaquil’s battle with the coronavirus, another crisis has emerged: finding, identifying, and returning the dead to their families. 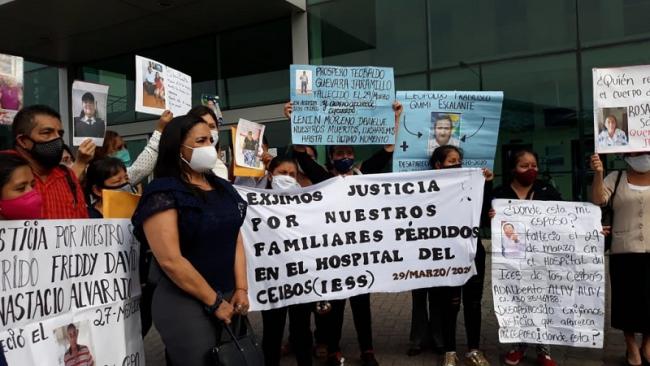 Since the height of the pandemic in Ecuador’s largest coastal city, families have stood outside public hospitals with signs asking for the whereabouts of their loved ones, who went missing in a collapsed system unable to cope with the constant influx of patients.

As the number of deaths in Guayaquil began to increase, many of the bodies were stored in shipping containers, according to Freddy Carrión, a lawyer at the Defensoría del Pueblo. He said that at least until April 11, there was no protocol for managing the overflow of the dead while hundreds sought medical attention around the city. Given Guayaquil’s humid climate and the lack of refrigeration within the containers, this only accelerated the decomposition of the bodies and the distortion of name tags.

Beyond the search for missing bodies, there are concerns regarding the discrepancy between the death toll reported by the Ministry of Health and the national registry office, which tracks provincial death counts. Between March and April, the Guayas province, where Guayaquil is located, had approximately 13,000 more deaths than previous years. As of July 22, the Ministry of Health has only recorded 1,644 deaths in the province from Covid-19.

During Guayaquil’s peak, videos and images on social media showed bodies left in the streets and unorganized shipping containers filled with remains. In one video, the interior of three containers are shown, all over-capacity, and baking in the city’s tropical heat.

The memories from a few months ago are still fresh in the minds of many guayaquileños. “What I lived through I wouldn’t wish on anyone, not even my worst enemy,” says Martha Lituma, who lost her husband in April and has since recovered his remains.

Lituma lost the love of her life, Genaro. He entered the Los Ceibos Hospital in northern Guayaquil, where 50 people were dying daily, according to what a doctor told Lituma. After showing symptoms that appeared to be Covid-19, she brought him to the hospital the morning of April 1. He died at 9:20 that evening.

Two days later, she learned the body went missing. “Seriously, how?” she says, repeating her words of disbelief at the time. She spent most of April looking for Genaro’s remains by showing his picture and looking for any leads to his whereabouts.

Lituma considered entering the shipping containers. “Please give me the strength so I can look,” she prayed in the moment. “But I didn’t enter,” she says.

Lituma remembers seeing a man who was frantically looking for his mother, but in a container labeled with her name, he found the remains of a man.

On April 23 Genaro’s remains were finally located. Because Martha was a suspected Covid-19 case at the time, her step-son and brother-in-law went to identify the remains. Once the process was over, she visited the cemetery to say her final goodbye.

Months later, dozens of other families still await answers from authorities to understand what happened to their loved ones. As the days pass, these families try to remain optimistic that the bodies will show up. “My dad was not only my dad, he was my friend, my brother, he was unconditional with me,” says José Marquez, remembering his father who died on March 28. “A part of me is gone, but you have to be tough.”

After being turned down by a half dozen hospitals in late March, José’s father, Pedro, was accepted to the Guasmo Hospital on Guayaquil’s south side. Four months later, the whereabouts of his father’s remains are unknown.

José has done all the tests, including the DNA exam.  The police forensic science unit told him to wait for a month, possibly two, as they are tasked with overwhelming pressure. However, since José took the test a few weeks ago, updates have been few and far between.

Another widow named María Alvarado is in the same situation. Her husband, Alberto, died in the Los Ceibos hospital a few days before Genaro, on March 29, leaving behind María and their six children.

During a phone interview, María sobbed, with an echo of chickens clucking in the background. Alberto was lost in the shipping containers among other bodies. According to María, the body had no name tag, making the eventual identification even more difficult.

Since then, fingerprint exams have all but failed. Her only hope rests in the DNA samples. She is anxiously waiting to hear from authorities. For María and José, and the many other families waiting in Guayaquil, patience is their only option.

“We are talking about more than 138 people who initially denounced these events,” says Freddy Carrión, the head lawyer for the Defensoría del Pueblo. “We represent about 38 families that didn’t have any information regarding the identification and return of the bodies of their relatives.”

Since the judge’s ruling, the process of identifying the remains has been handed to the forensic science unit of the national police. Since some of the deaths took place over 100 days ago, DNA identification is the final option.

Beyond identifying bodies, the ruling also required the involved institutions—the Social Security Institute and the Ministry of Health, which includes the public hospitals Los Ceibos, Guasmo, and Teodoro Maldonado—to make a public apology about the management of the corpses during the crisis. On July 31, a small statement appeared in a local newspaper, signed by an official from the Ministry of Health's Public Hospital Guasmo, offering a public apology about the bodies that were lost. The ruling also calls for the Ministry of Health to provide psychological treatment to the victims of the families for one year and that these entities seek proper training for the next public health emergency.

The situation in Guayaquil has calmed for now, despite mounting concerns of a new wave of the coronavirus. Guayaquil has minimized the number of daily cases, and the city’s turnaround has been celebrated. But for others, it may be too soon to declare victory.

“I cannot speak of a success story when thousands died,” says Carrión. “A success story is when we are able to contain the pandemic and have an extremely small number of people who have died.”

Vincent Ricci is a freelance journalist and photographer based out of and covering Ecuador. He reports on human and Indigenous rights, social movements, immigration, and politics. Follow him on Twitter at @Vincent__cr.