The IMF Gambled and Lost: Why Pay Them Back?

The time has come to start moving away from economic imperialism imposed from elsewhere. 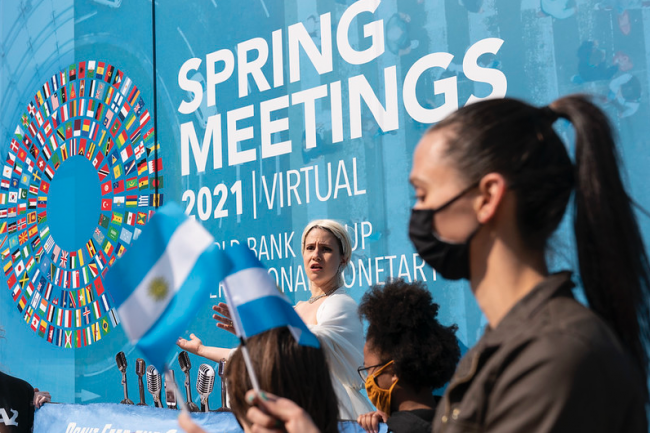 This article was originally published in Spanish on Revista Mugica.

We economists tend to think of neoliberalism as a set of economic policies, whose disastrous effects Argentines know well, and that to transcend it we need only to implement a different set of macroeconomic policies. Neoliberalism, however, is much more than that. It is a system of political and economic domination that has deeply transformed everyday life in capitalist countries. Social, political, judicial, media, and economic structures have suffered near irreversible transformations that guarantee the ongoing financial colonialism to which marginalized countries have been subjected, despite the election of populist governments. There is also a strong ideological component to neoliberalism that promotes as “common sense” social behaviors that emphasize competition, individualism—i.e. “save yourself”—and an economic perspective that is acutely orthodox and fiscally conservative.

Although certainly not the only one, the International Monetary Fund (IMF) is perhaps the most well-known backer and promoter of this new world order of financial colonialism. The conditions for IMF loans made available to member countries in crisis are always neoliberal economic reforms: financial and commercial liberalization; privatization of state enterprises, public services, and social security; labor deregulation (“flexibilization”); and other reforms meant to give more power to international capital at the expense of workers and the state.

The current negotiations between the Alberto Fernández government and the IMF are a key example of the sordid elements of this system of domination. Granting an IMF loan to the struggling Mauricio Macri government resulted in a number of serious irregularities that demand a discussion on its legitimacy, whether it should be repaid, and if so, under what terms and conditions.

The Multiple Irregularities of the IMF Loan

When the international financial markets stopped bankrolling Argentina at the end of the first quarter of 2018, putting an end to the reckless debt accumulation process of the Macri government, Argentina was basically faced with the reality of default. To avoid this and the inevitable crisis that would follow, Macri desperately turned to the IMF. The IMF agreed to help, but in doing so, committed multiple irregularities, violating its own articles of agreement and bylaws to accommodate a government “friendly” to Trump and financial colonialism.

What are the irregularities and violations? First, the loan amount authorized in a stand-by agreement was for $57 billion ($50 billion in the initial agreement, which was then increased a few months later by $6.7 billion in a second agreement). According to the IMF’s bylaws, the maximum amount for a typical stand-by loan must not exceed 145 percent of quota per year, and the total amount cannot exceed 435 percent of the quota. Argentina’s quota is 3,187.30 SDR, which in dollars is equivalent to approximately $4,460. That is, the loan was for a total of approximately 1,100 percent of the quota, well above the maximum limit established in the bylaws.

Second, the IMF loan amount granted to the Macri government exceeded 60 percent of the IMF’s lending capacity, which is also prohibited by IMF bylaws that stipulate that a country’s aid cannot exceed 50 percent of available funds allocated for this purpose.

Third, the IMF agreed to lend money to the Macri government even when the Fund’s staff—in successive reports prepared before the disbursement of each loan installment—described Argentina’s debt as unlikely to be sustainable. Given this analysis, the IMF should have required that Argentina restructure its private debt before making the loan, a strategy that the Fund had followed in other countries. However, this was not the case in Argentina. Rather, the opposite was true: faced with the reality of unsustainable debt and virtual default, the IMF loaned $57 billion more.

Fourth, as the IMF made loan disbursements to the Macri government, it became evident that the funds disbursed were being used to finance capital flight, similar to what happened in Argentina prior to the 2001-2002 crisis. Article VI of IMF bylaws expressly prohibits granting loans for this purpose. Nevertheless, the IMF continued disbursing each installment of the loan, effectively knowingly financing capital flight.

Alberto Fernández said this to the IMF delegation he met with as a candidate in 2019, according to the press release issued following the meeting. In a recent CNN interview, Macri himself admitted that the IMF loan had been granted so that foreign investment funds could abandon their stakes in Argentine bonds and take their money abroad. Capital flight and the IMF’s active role in this process is also documented in an investigation carried out by Argentina’s Central Bank. The report served as the basis for a lawsuit, which unfortunately seems to have been shelved by the justice system.

Lastly, Mauricio Claver Carone, the current president of the Inter-American Development Bank and U.S. representative on the IMF board during the Trump administration, said bluntly that Macri’s IMF loan was a political favor, since Trump was betting on Macri staying in power. In a recent interview, Macri himself said  that the IMF loan was to guarantee a “transition”—that is, getting through 2018 and 2019 smoothly and winning the October 2019 presidential elections. In other words, it was a  direct contribution to Mauricio Macri’s presidential campaign.

As if that were not enough, in a recent interview, former president Macri had the gall to claim that he would have resolved the “Fund [IMF] issue” in five minutes. Many, of course, interpreted this as sarcasm, but in reality, it was a very serious confession because Macri also said that the current debt service schedule—almost $20 billion in 2022, for example—was deliberately agreed upon with the IMF for fear of a populist victory. In other words, there is explicit recognition that the service schedule infeasibility was meant to hinder and condition the next administration if it wasn’t Macri’s, or another administration sympathetic to the IMF.

What Is to Be Done?

The IMF bet heavily on the continuity of the Macri government by committing multiple gross irregularities and violations of their bylaws. They gambled and lost. One might assume that Argentina is in a favorable position to take a tough negotiating stance with the IMF. Should the loan be paid back? And if so, under what terms (a “haircut,” maturity, etc.)?

The government has sent mixed and, in some cases, worrying signals on this issue. It would appear that the most the government aims for is the elimination of interest rate surcharges assessed to countries that receive loans greater than their allotted capacity, and a longer debt service schedule. Little or nothing has been said about the conditions that the IMF normally imposes on any agreement nor about the gross irregularities committed by the IMF. In fact, the fiscal conservatism demonstrated by the Ministry of Economy, as pointed out by Vice President Cristina Fernández de Kirchner, is a worrying sign in this sense.

The IMF argues that a moratorium, the elimination of interest surcharges, or a term extension beyond the decade is legally prohibited by the Fund’s bylaws. Nevertheless, the IMF violated its own norms many times in order to grant the loan. Now that it’s time to negotiate repayment, they can’t show any sort of flexibility? The statute appears to be flexible when granting loans to governments aligned with financial colonialism, but not so when it’s time to repay those loans.

We believe that the right conditions exist to bargain a lot harder, taking a tough stance in accordance with the irregularities committed throughout the loan granting process. With regard to the IMF, should Argentina pay? Plagued by irregularities, the IMF loan was a bet on Macri staying in power and an explicit attempt to influence Argentine democracy. Luckily, the IMF and Macri lost. Why then should the government and the Argentine people assume responsibility for the losses generated by such a gamble?

Faced with the IMF’s inflexibility, there are two options. The first is direct: to not pay the losses generated by their failed bet (i.e, to default). The second is to pay, but unilaterally deciding the terms and conditions of repayment. For example, zero interest (as a ”haircut” or debt reduction), a 25-year repayment schedule with a six-year moratorium and no conditionality. As they say in Hollywood, take it or leave it.

Lastly, even when if Argentina were to pay, it is necessary to thoroughly audit capital flight and the loan conditions. The Argentine people should not have to take on tremendous debt created by a few and not benefitting the majority. The Central Bank calculated the amount of capital flight. Barely 10 percent of foreign exchange buyers (referring to individuals) bought $47 billion or 63 percent of the total purchases of foreign exchange. It’s vital to know the first and last names of these individuals, the process of how capital fled, and if it was duly reported to the treasury. Based on this information, a comprehensive process of assessing the debt can begin, along with how to proceed.

It is also essential to initiate an in-depth debate, with criminal charges at the center—which the executive should push if the justice system continues to sleep on it—against those who not only brokered the loan, but who publicly have admitted to purposely agreeing to terms that would hinder future administrations, explicitly violating the constitution. It’s impossible to generate the needed consensus and reverse the so-called adverse correlation of forces without facing these urgent conflicts.

If we really want economic independence, social justice, and political sovereignty, then these things must be asserted, because no one is going to give them away. The time has come to start moving away from the economic colonialism imposed from abroad and wielded by local politicians adhering to foreign commercial interests.

Alan Ciblis is an economist and professor of political economy at the Universidad Nacional de General Sarmiento in Buenos Aires, Argentina.

Germán Pinazo is a professor and director of the political economy department at the Universidad Nacional de General Sarmiento in Buenos Aires, Argentina.