The Impasse of the Latin American Left (Review)

As the Left in power returns, the lessons of the Pink Tide have become increasingly relevant. Recognizing governments’ well-conceived policies as well as their errors is key to understanding the comeback. 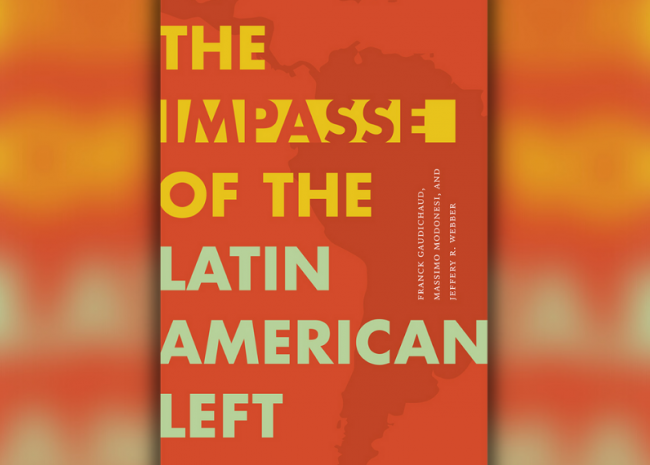 Can the firebrand Hugo Chávez with his embrace of ”21st century socialism” be placed in the same category as the pragmatic Lula? Writers across the political spectrum make a sharp distinction between the two as well as between other radicals like Bolivia’s Evo Morales as opposed to moderate leftists like Uruguay’s Frente Amplio government. Anti-leftist writers like Jorge Castañeda, as well as some moderates, lauded Lula while denigrating Chávez (who Castañeda labelled the “bad” or “populist” left) and his followers. Others further to the left upheld the opposite position.

To a degree, the authors of The Impasse of the Latin American Left, Franck Gaudichaud, Massimo Modonesi, and Jeffery R. Webber, can be located in the opposite camp from that of Castañeda. The authors view the radical 21st-century Latin American governments more favorably than those of the moderate left. They credit Chávez for being largely alone in achieving certain structural economic changes through expropriations. In contrast, Brazil, according to the authors, became a “sub-imperial” power with 80 percent of its exports going elsewhere in the region in the form of “industrialized products of high or (mostly) medium grade technology,” largely in return for natural resources and other primary products from its neighbors.

In spite of the obvious differences between the radicals and the moderates, many authors place both groups of governments in the same category and view them as part of the same phenomenon, referred to as the Pink Tide. After all, Pink Tide leaders all followed a fairly nationalistic foreign policy and privileged social programs targeting the non-incorporated sectors of the population. Another common denominator is that, in the words of the authors, Pink Tide governments “represent a significant break with neoliberalism.”

Finally, Pink Tide governments, both those committed to socialism and those which weren’t, were subject to considerable hostility and threats from Washington and its allies. Brazil, one of the “moderates,” is an example. The hearty reception received in the U.S. capital by former federal judge Sergio Moro, whose “clandestine collaboration with state prosecutors” led to Lula’s jailing, is just one manifestation of Washington’s preferences.

Gaudichaud, Modonesi, and Webber, while recognizing these key differences among moderate and more leftist governments, argue that the theory of “passive revolution” first formulated by Antonio Gramsci is applicable to the entire Pink Tide phenomenon, even Venezuela. Viewed through this lens, the Pink Tide governments are not “direct expressions” of either the dominant classes or the popular sectors and thus enjoy a relative autonomy, but they are dedicated to achieving a “reformist conservative project.”

In the framework of passive revolution theory, the feature most emphasized in the book is the Pink Tide’s tight control and demobilization of social movements. Popular movements were essential elements in the rise to power of the Pink Tide: in the case of Brazil and Bolivia, Lula and Morales emerged from them, and in Venezuela, Ecuador, and Argentina, they forced presidents out of power. The book’s authors allege that Pink Tide governments and parties ended up taming and disciplining social movements and in other cases marginalizing them.

The authors point to a “polarization” among analysts on the left regarding the Pink Tide phenomenon. On the one hand, a pro group includes “unconditional and uncritical apologists.” On the other are the critics. The latter camp, what the authors call “a rainbow of critics from the left,” consists of the defenders of different isms, including anti-capitalism, libertarian autonomism, environmentalism, and postcolonialism (emphasizing Indigenous rights and communities). The anti-capitalist critique, which most resembles the views of the authors, highlights the Pink Tide’s class alliances with sectors of the bourgeoisie. Along these lines, the authors point to the alliance between the older landed oligarchies and agribusiness multinationals, which cemented the “structural continuities” between the neoliberal years and the Pink Tide period. The most anti-Pink Tide critique comes from the champions of “libertarian autonomism,” as represented by Uruguayan author Raúl Zibechi, who views the Pink Tide as a “step backward” and denies its anti-neoliberal character.

The book’s critique of the Pink Tide is thorough and backed by solid evidence. The errors and flaws of the Pink Tide included the failure to significantly reduce the levels of corruption that characterized the previous neoliberal period; the tendency toward deindustrialization; the ecological damage that accompanied the extractivist model; the failure to consult rural communities including Indigenous ones; and the failure to respect social movement autonomy. Considering the book’s empirical strongpoints, its shortcomings are not so much what it says but what it leaves out or downplays.

First, in spite of its discussion of the devastating impact of U.S. interventionism, the book fails to factor imperialism into the analysis of the causes of the Pink Tide’s allegedly erroneous policies and strategy. To take an extreme example, Washington’s hostile actions against Venezuela turned into a virtual war on Venezuela beginning with Barack Obama’s 2015 decree declaring the nation a threat to U.S. national security and then with the Trump administration’s suffocating sanctions and support for military actions. In the face of these seemingly insurmountable challenges, the authors would have had the Chavista governments go on the offensive. Along these lines, they point out that the countries that most confronted imperialism (i.e. Venezuela, Bolivia, and Ecuador) were precisely the “ones that have restored revolutionary symbolism to prominence,” thus implying a correlation between imperialist offensives and Pink Tide radicalization. But the opposite could be argued, namely that in the face of such ruthless actions by the world’s most powerful nation in history, a defensive strategy was in order. This is precisely the current line of thinking of Nicolás Maduro’s followers, some of whom point to Lenin’s New Economic Policy (NEP) as an instructive precedent. In a war-like situation, expectations of change need to be tempered by the realities on the ground, and this reality needs to be taken into account in any analysis of demobilization, the curtailment of democratic liberties, and extractivism, all at the center of the authors’ concerns. To give one example: Venezuela’s failure to diversify the economy was undoubtedly related to the imperative of countering destabilization campaigns by stimulating active support among the popular sectors. Ambitious social programs, more than economic structural transformation, promised to achieve this in the short run.

Without going so far as to advocate one policy over another, I would criticize the book for failing to address the issue of how strategies have to be crafted on the basis of different conditions on both international and national stages.

Second, as the authors show through the prism of the theory of passive revolution, the Pink Tide leaders in power attempted to control the social movements that were initially sympathetic to their governments. What the authors largely pass over is that this exertion of control was a tendency, but not one that completely demobilized the movements to the extent that they lost all vitality or were completely alienated from the government.

The most striking example is the events in Bolivia that were partly underway at the time of the writing of the book. Social movement activists and leaders who had adamantly opposed Morales’s extractivist policies—even the one furthest to the left, Felipe Quispe—joined forces in opposing the right-wing government of Jeanine Añez. They forced new elections and supported the Pink Tide MAS party in the presidential contests of October 2020. Another example is the active support by Brazil’s iconic Landless Workers’ Movement (MST), in partnership with the Pink Tide’s Workers’ Party (PT), for Lula’s candidacy in the upcoming presidential elections slated for October 2022. Still another example is the election of the leading figure of Venezuela’s commune movement, Ángel Prado, as a mayor in 2021 on the ticket of the Pink Tide’s United Socialist Party (PSUV), in spite of the bitter clashes between the two in the past.

Third, the authors are totally opposed to the Pink Tide government alliances with “one or more ruling-class fractions,” but they fail to distinguish between strategic and tactical alliances. The differences between the two couldn’t be greater. Some of these arrangements were, at least at first, tactical in that they were pragmatically motivated with a short-term time frame. In Venezuela and Bolivia, for instance, they were designed to counter violent and economically devastating disruptions actively supported by powerful business organizations in order to bring about regime change. In many Pink Tide countries there was a practical consideration: why should government contracts go to businesspeople who were set on regime change? So alliances were formed with those businesspeople who, for whatever reason they may have had, did not join the unprincipled and ruthless attacks on the government. In short, the issue of alliances was a complex one. The authors recognize the diversity of the alliances “according to different national contexts,” but fail to discuss diverse government motivations, some of which were hardly opportunistically driven.

Fourth, the authors are sympathetic to and frequently cite leftist intellectuals, activists, and organizations, but ones that for the most part lack a significant political following in their respective nations. Indeed, they have failed to make inroads to fill the gap on the left created by Pink Tide defeats after 2015. Argentine former president Cristina Fernández famously pointed to the marginal status of many of the leftist critics of her government, saying “You know what there is to my left? Nothing but the wall.” Gaudichaud, Modonesi, and Webber recognize the weakness of those they support and partly blame it on Pink Tide leaders for calling them “traitors” and “sham revolutionaries.” The criticism is well founded as Pink Tide leaders in Venezuela, Ecuador, and elsewhere have displayed a degree of sectarianism in their dealings with critics to their left.

Criticisms notwithstanding, the Pink Tide’s staying power over the last two decades is impressive. Its recent comeback has been due to the electoral gains scored by moderate presidential candidates who follow a pragmatic approach rather than the hardline one proposed by the authors. This has occurred in Mexico, Argentina, Bolivia, Chile, and Honduras (plus Andrés Arauz’s near victory in Ecuador).

The Impasse of the Latin American Left presents a valuable analysis that contributes to the understanding of the Pink Tide phenomenon, but, in my opinion, doesn’t tell the whole story. Errors and shortcomings have to be contextualized not by simply recognizing the existence of adverse conditions but by addressing the issue of the feasibility of options. To the authors’ credit, however, the theory of passive revolution effectively frames the key issue of demobilization which should be the point of departure of any serious analysis of the topic from a leftist perspective. The lessons of the Pink Tide, rigorously explored by the authors, have become increasingly relevant now that it is making a comeback—a comeback that can only be understood in the context of recognizing the well-conceived policies implemented by those governments as well as their errors.