Members of Colombia's Emberá community, many of whom are victims of conflict, have camped for months in Colombia's capital to generate attention and demand change. 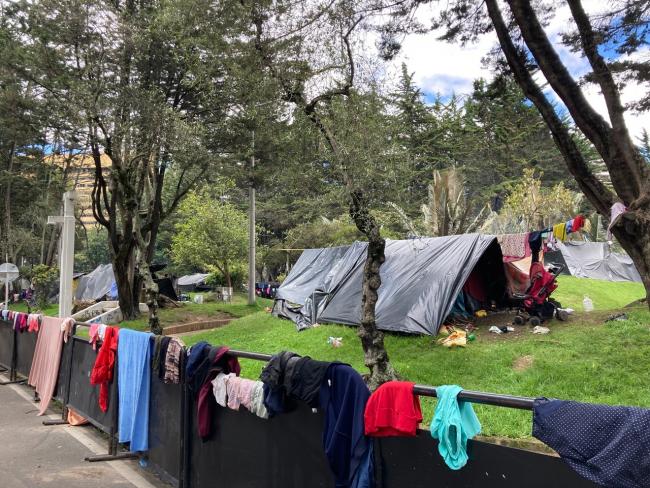 Since late September, an Indigenous community, refugees from Colombia’s ongoing rural violence, has been living in Bogotá's central Olaya Herrera National Park. Colombian authorities have been struggling to dissolve the camp, which has housed up to 1,500. Many have recently left, but a determined group remains, including many children, dozens elderly, and several pregnant women. The authorities claim that about 400 people currently reside in the camp, while the community mentions more than 1,000.

"We will resist and stay until the government provides us with safe lands and security guarantees that make a dignified life possible," states José, one of the group leaders, who asked not to use his real name. While most camp residents are Emberá, an Indigenous group of about 80,000 who live in Colombia and Panama, others belong to different Indigenous communities.

Along the buzzing Séptima, one of Bogotá's main north-south arteries, and next to the Javeriana, a costly private university and the city's banking district, sits the park where the Emberá live in improvised tents. Instead of city dwellers enjoying the park on sunny days, the smell of fire, children running between the tents, and the sight of clothes drying in the wind dominate the scene.

"The worst are the days with heavy rain. Water enters the tent, and it sometimes takes days to dry," states Carlos, who arrived in mid-November in the camp with his wife and their three young children and also asked not to use his real name.

Although the park’s public sanitary facilities are open for the Emberá, they are utterly insufficient. The community depends primarily on donations of food and medicine. "On days without sufficient donations, we suffer from hunger," says Carlos. Their modest income from selling artisanal jewelry and begging in Bogotá's city center is barely enough to buy firewood and keep warm during the cold, rainy nights where temperatures in the capital frequently drop below 10 degrees Celsius. In desperation, some camp members have turned to chopping down the park’s trees.

For months, the situation in the park gained limited public attention. Then on November 28, the death of a 21-month-old Emberá child in the park stimulated coverage by the national press, increasing pressure on the authorities to address the issue. In late December, a local judge ruling accepted a petition that city and district authorities must provide immediate and comprehensive humanitarian assistance to the community. The authorities were required to organize the camp residents’ relocation to temporary housing in Bogotá by December 31, and prepare the return to their ancestral territories.

The capital’s authorities offered five alternative locations. However, the community leaders rejected them for being too small to accommodate the whole community, too far from central Bogotá, located in a former slaughterhouse, or because they expected neighborhood resistance. The city government, however, insists that the sites offered were adequate.

“The alternative sites proposed, while being transitory in nature, would have implied a significant improvement in terms of housing and sanitary conditions,” states Vladimir Rodríguez, High Councilor for Peace, Victims, and Reconciliation from the Bogotá’s mayor office. The authorities also tried to survey the camp residents to serve their needs better and facilitate a relocation, but the residents attacked them with sticks.

"We don't want a different transitory place; no one there would care about us," states José. "Through our presence here in the park, everyone can see that hunger and misery exist in Colombia, even if the government denies it."

Indeed, the camp's location in the middle of Bogotá has contributed to a growing awareness among the wider population.

"The situation in the park is a disgrace for the Colombian state," says nearby resident Sebastian Vega, adding "In this country, the economic interests of a few drive the government's course of action." Thus, the camp residents’ fear that if they relocate away from their central location, attention to their demands will diminish is not unreasonable. 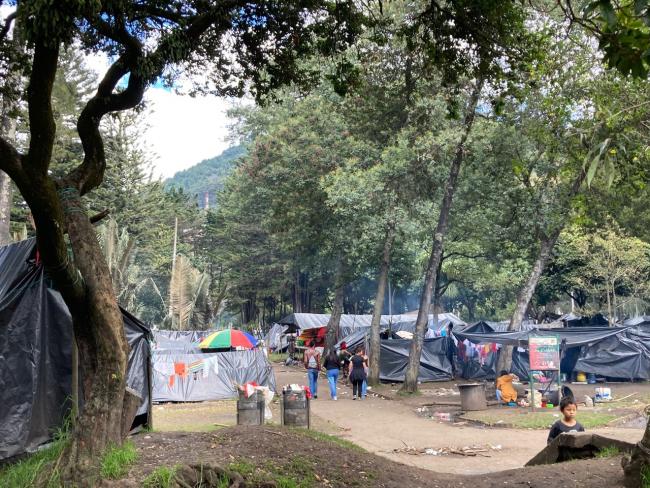 Most of the Emberá in the park come from Chocó and Risaralda, two departments in Western Colombia. The region is one of Colombia's least developed and most impoverished. But the main reason for the Emberá’s flight to Bogotá is the ongoing violence in many parts of rural Colombia, especially in zones with Indigenous territories.

"Men in hoods told us to leave, or our lives would be in danger," says Carlos. While he doesn't know the aggressors’ identities, they likely belong to one of the multiple armed groups that fight for control over the lucrative illegal mines, coca cultivation fields, and corresponding trafficking corridors in Chocó.

The displacement of Indigenous people from their lands has been a reality in Colombia for decades. Since the Spanish colonization of the Americas in the 16th century, the Indigenous people who survived imported diseases and massacres have been repeatedly deprived of their ancestral lands. First colonial and later Colombian settlers pushed them away from agriculturally fruitful areas towards marginal mountain ranges or the Amazon. Those who stayed had to enter a feudal-like servant system, including the payment of terrajes, working without pay for landowners in exchange for being allowed to live on and cultivate small plots of land. Colombia's armed internal conflict since the 1960s further intensified violence against Indigenous people, particularly the emergence of right-wing paramilitary groups. Since the 1980s, paramilitaries have conducted brutal massacres and disappearances among Colombia's rural and Indigenous population. These attacks were often carried out with the blessing of large landowners, local and national politicians, and state authorities to strengthen the landowners' grasp on lands and cut down social protests.

Yet, the security situation across Colombian territories varies significantly, and not all the Indigenous residents in the park are recent victims of Colombia’s armed conflict.

“According to the Indigenous regional authorities, right now there are no armed groups in the Indigenous reserves from which the Emberá community in the park were pushed out  a few years ago,” says Rodríguez. He argues that the Colombian ministries of defense and the interior, regional authorities, and even the national Emberá leadership have certified that a return is possible: “The highest Indigenous authorities in Colombia came to Bogotá and told the community: you can come back; it is safe to return.”

Indeed, more than 1,200 Emberá from a similar camp outside Bogotá recently returned to their ancestral territories in Chocó and Risaralda without issue. Following months of negotiations with the Emberá‘s leaders, the national government’s victims unit and various regional government entities orchestrated the process. The authorities gave security guarantees and organized humanitarian aid, financial support, and transport for the families—an effort also praised by Indigenous leaders.

However, even if it is safe to return, the socioeconomic situation of the Indigenous population in Colombia merits protest. On paper, Colombia has promised on multiple occasions to elevate the living conditions of its 1.5 million Indigenous people. In 1991, Colombia’s constitution recognized the country's cultural and ethnic diversity. The same year, Colombia also ratified the International Labor Organization's Indigenous and Tribal Peoples Convention, a key international instrument to guarantee the rights of Indigenous people. In response to paramilitary groups' numerous massacres against the Indigenous population, Colombia took state responsibility for all conflict victims and signed agreements for their reconciliation in 2011. Yet, the state has rarely fulfilled its promises, and the precarious living conditions of Indigenous communities in Colombia persist. International bodies such as the Interamerican Commission on Human Rights have criticized the Colombian state for not meeting reparation promises to Indigenous people. In 2019, the poverty rate among Indigenous people was 59.6 percent, higher than any other population group. Indigenous communities also frequently lack access to education and healthcare.

In recent years, violence against social activists in Colombia has increased, and Indigenous leaders are the most frequent targets, with 83 killed in 2019 alone and most perpetrators remaining unidentified. The 2016 Colombian peace deal with the FARC, formerly Latin America's largest guerrilla group, did not improve safety for the communities either. The power vacuum left by the demobilized FARC has led to other criminal groups vying for control of rural territories. Attracted by large profits, the successors of paramilitary units, remaining guerrilla groups, and FARC dissidents who abandoned the demobilization process seek to control these lucrative illicit economies. While before 2016, the FARC's territorial control implied a certain level of stability, the unclear balance of power nowadays has intensified violence. Consequently, the killings of Indigenous leaders have increased.

However, some Indigenous regional leaders disagree that occupying the park in Bogotá is the best strategy. They prefer to stick to Mingas, Indigenous protest marches, after which the participants return to their lands. Abandoning the resourceful lands in Chocó and Risaralda for months to occupy the Bogotá park in protest indeed risks other groups taking control of their lands. High councilor Rodríguez agrees, saying, “For multinationals and other interest groups who would like to exploit the abandoned Emberá lands, there is nothing better than the community remaining in Bogotá.”Other government officials state that some of the leaders of the Emberá in the park have political ambitions and impede a relocation to strengthen their political prospects.

José, Carlos, and the other Indigenous residents in Bogotá’s national park thus face two alternatives. They could return to their territories where Colombian history has taught them that, even if they feel safe now, displacement and violence can reappear anytime. Or they could stay in Bogotá, where although they live in precarious conditions, their visibility might help them achieve their political agenda. Doubtless, a very difficult choice to make.

Christoph Sponsel is a doctoral student in political science at Oxford. His research focuses on social protests and political violence in Latin America. Besides several years of working in the private sector, Christoph has worked at the UN Office of the High Commissioner for Human Rights in Bogotá, the German embassy in Quito, and multiple NGOs across Latin America. Christoph holds degrees from Yale, Cambridge, and the Barcelona School of Economics.