Beyond the Washington Consensus 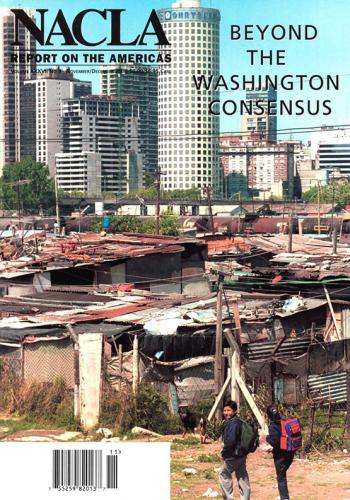 Latin America stands at a crossroads. Continuing along the present path of deepening indebtedness, never-ending recession, plummeting employment, and household impoverishment is simply unsustainable. It would be a mistake to conclude that the dominant economic policy paradigm in the region is exclusively responsible for this sorry performance. Nonetheless, the verdict is now in on the ability of the market-based economic policies associated with the Washington Consensus to generate positive results: The market-driven model has failed miserably, and alternatives need to be put in place sooner rather than later.

This NACLA Report aims to provide an overview of some of the questions that are being debated vigorously in Latin America and the Caribbean, and to highlight some of the more provocative ideas circulating among progressive analysts of development in the region. We do not aim to achieve consensus, not to mention closure. Indeed, it would be premature to attempt either. Our admittedly more modest objective is simply to situate the present conjuncture in a broader historical context, to signal areas of particularly heated controversy and to suggest some elements of an eventual alternative.