Revolutionary Legacies in the 21st Century 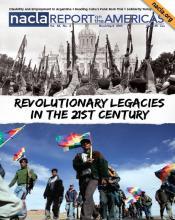 On the occasion of the Cuban Revolution’s 50th anniversary, this Report examines legacies of revolution throughout Latin America. Besides the Cuban landmark, the year 2009 also marks other important anniversaries in the Americas: Hugo Chávez’s Bolivarian Revolution in Venezuela is now a decade old; the Sandinista revolution in Nicaragua took place 30 years ago; and Mexico is approaching the centennial of its 1910 revolution, as well as the bicentennial of its War of Independence. These anniversaries represent an auspicious moment for us to pause and critically reflect on how the region’s revolutionary past lives in the present. This is a particularly useful task today, given the unprecedented political changes under way, with eight South American and, possibly by April, two Central American countries having elected governments generally considered left or center-left.