Food Crisis in the Americas 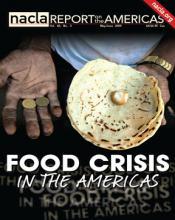 In early March, Olivier de Schutter, the United Nations special rapporteur on the right to food, said there had been a “severe mistake in the diagnosis of last year’s food crisis.” Referring to the explosion of prices for basic grains in the global market that began in 2007, Schutter explained that development aid and reform proposals were misdirected at boosting exports. The real problem, he emphasized, was not low supplies but the vulnerability of the world’s near 1 billion hungry people to price volatility. In place of stimulating exports, he recommended strengthening the production of domestic small farmers through access to land and resources, labor rights enforcement for landless farmers, and government programs to insulate peasants from price swings. These recommendations, though unspecific, resonate with many of those discussed in this Report, which aims to step back and reconsider the 2007–08 food crisis within its long-term context. We pay particular attention to the corporate monopoly on food production, which has been practically institutionalized over decades of neoliberal policies at every level.