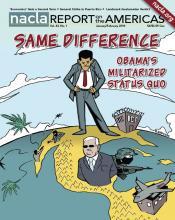 In April, President Obama made his hemispheric debut at the Summit of the Americas in Port of Spain, Trinidad and Tobago. “I’m here to launch a new chapter of engagement that will be sustained throughout my administration,” he told his counterparts, to applause. He later added that his administration would condemn “any efforts at violent overthrows of democratically elected governments, wherever it happens in the hemisphere.” Since then, however, Obama’s honeymoon with Latin America has definitively ended—largely because of his administration’s efforts to prevent the reinstatement of Manuel Zelaya to the presidency of Honduras, following the military coup in June, and its granting of legitimacy to the coup government. We might have expected as much from Bush, whose well-known support for the Venezuelan coup in 2002 did little to make him popular in Latin America. Why has the Obama administration’s Latin America policy proved so continuous with its predecessor’s? This Report approaches the question of continuities by examining the institutional and ideological obstacles to progressive policies, as well as the political and economic bases of such tragically failed policies as Plan Colombia.