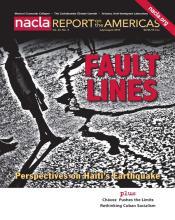 The earthquake that struck Haiti on January 12, 2010, will forever be remembered as one of the world’s deadliest disasters. For 30 seconds the earth shook and reduced a nation—already struggling with the historical weight of slavery, underdevelopment, imperialism, and intense internal divisions—to rubble. One in seven people were suddenly rendered homeless, while more than 300,000 lost their lives, according to official estimates. Haiti dominated the airwaves and cyberspace for weeks, bombarding world citizens with words and images at once contradictory, controversial, consuming, and ultimately confusing: The earthquake seemed to have as many meanings as people with access to a blog. In this Report, we aim to sort out critical perspectives on the disaster. As each of the articles herein show, understanding the disaster means understanding not only the tectonic fault lines running beneath Haiti but also the deep economic, political, social, and historical cleavages within and surrounding the country.