Four years after her death in Chile, a Haitian migrant’s story offers an urgent reminder of the deadly proportions of anti-Black state violence. 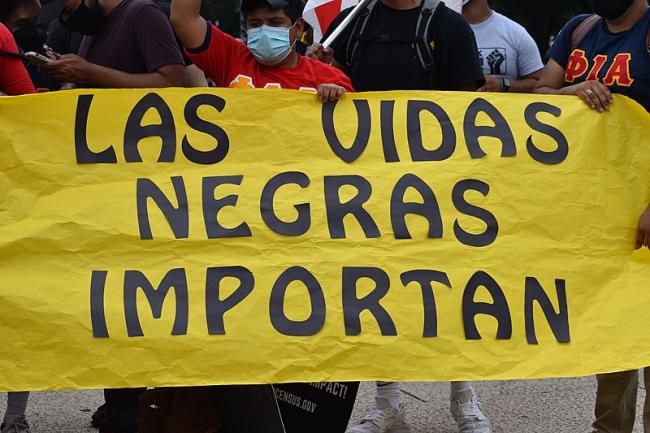 On September 30, 2017, 28-year-old Joane Florvil, a Black immigrant mother from Haiti living in Santiago, Chile, died while in police custody. Florvil had been arrested more than four weeks earlier for allegedly abandoning her two-month-old baby in front of a municipal building in Santiago’s Lo Prado neighborhood, where she had gone to report the robbery of a bag containing her daughter’s identification documents. Unable to communicate in Spanish, Florvil motioned to the guard to watch her sleeping infant in the stroller as she went to find help. To Florvil, leaving her sleeping baby in the guard’s care was a safe and culturally acceptable practice. But the guard interpreted Florvil’s action as abandonment.

The next day, on August 30, 2017, the Chilean police arrested Florvil, charging her with reckless abandonment of a minor. Chilean media broadcasted a picture of Florvil’s arrest, depicting her as a criminal and a “bad mother.” On August 31, one day after her arrest, Florvil was taken to the hospital to be treated for severe cranial trauma. The police officers in charge alleged that Florvil had “banged her head against the walls” because she was upset about her situation. The young mother remained in the hospital while the state retained custody of her child. One month after her arrest, Joane Florvil died.

Florvil’s death sparked national mourning, outrage, and protests led by multiple anti-racist and immigrant rights groups that viewed what happened to her as a state-perpetrated hate crime. On the first anniversary of her death in 2018, social organizations declared September 30 the Día nacional contra el racismo (National Day Against Racism).

According to Universidad de Chile journalist Catalina Calderón, the purpose of the annual September 30 commemoration is to bring attention to the prevalence of anti-Black and anti-Indigenous racism in Chile and to remember people who have lost their lives to racist acts at the hands of the state, militias, or private citizens. Although the date was selected to commemorate Florvil’s death, there have been other victims, like Camilo Catrillanca, a Mapuche farmer from Temucuicui who was shot by the Chilean police in November 2018, and Haitian citizen Joseph Henri, who died of pulmonary failure due to neglect in August 2018 while detained at the Santiago airport. The wave of protests across the South American nation following these deaths led to a national dialogue about immigration, racism, and the rise of neo-Nazism in contemporary Chile, bringing visibility to activists’ decades-old demands for immigration reform, social changes, and the need to pass legislation to protect the lives and integrity of migrants of color and Indigenous peoples. In July, after four years of impunity in Florvil’s case, a Santiago court reopened the investigation into her death.

The world is accustomed to thinking of Chile as a Global South nation that bounced back from a brutal dictatorship to become a model democracy—though the 2019 uprising against gaping inequality helped shatter the illusion. Over the last two years we have witnessed Chilean people fighting to put an end to Pinochet-era Constitution and replace it with progressive norms and laws that safeguard the rights of women, Indigenous peoples, and people with disabilities. At the heart of forging this new constitution was the concept of citizen-delegates, an approach that advocates for the active participation of everyday people in policymaking. After Chileans voted overwhelmingly in favor of rewriting the constitution via an elected constitutional convention, pressure from activists succeeded in shaping the convention with gender parity and seats reserved for Indigenous people—moves widely heralded as setting a new standard for diversity in politics. Yet, Congress rejected a proposal to reserve a seat in the convention for an Afrodescendant delegate. In tandem with its “progress,” Chile has also entrenched state-sanctioned anti-Black xenophobia.

In the last two decades, as Chile’s economy grew and it went from being a country recovering from dictatorship and exile to one that prided itself on modeling equality and democratic values, it became an immigration hub. Between 2014 and 2017, the rate of immigration to Chile grew by more than 200 percent. By 2018, 7 percent of the Chilean population was foreign-born. Haitians became the third largest ethnic group in Chile in 2019.

Along with immigration, anti-Indigenous racism, xenophobia, and anti-Blackness are also on the rise in Chile. There were hundreds of hate crimes informally documented by immigrant rights organizations between 2018 and 2019 alone. In addition, labor exploitation, microaggressions, housing discrimination, and other forms of racism against Black migrants and second-generation Black Chileans are commonplace. Black women often report being called prostitutes or being sexually harassed on public transit and in the streets. Covid-19 has also fueled anti-immigrant hate, making immigrants and minoritized citizens of color targets of attacks. In the United States, we saw a rise of anti-Asian violence. In Chile, the blame was put on Black people, particularly Black migrants, who were portrayed in public health messaging and media coverage as potential spreaders of the virus, increasing the stigmatization they face. Such racist and xenophobic rhetoric, paired with the fear of the virus and often inadequate public health measures, fuel violence and exploitation of the most vulnerable populations.

In April, President Sebastián Piñera signed a new immigration law that expedites deportations, introduces new specific visa requirements for Haitians and Venezuelans, and restricts peoples’ ability to regularize their immigration status. Piñera heralded the law as “cleaning up the house.” The Cátedra de Racismos y Migraciones Contemporáneas of the Universidad de Chile called it a “concentrated expression of institutionalized racism.” Amid anti-Black mass deportations of Haitians from the United States, Chile is likely to face heightened U.S. pressure to implement the new rules, as many Haitians recently attempting to request asylum at the U.S. border reportedly departed from the South American country.

Meanwhile, right-wing groups, such as those affiliated with the extreme right Spanish party VOX, which has a presence in Chile via connections with the local Partido Republicano, are working to influence public opinion and policy-making to ensure that citizenship remains a category accessible only to some, excluding Indigenous and Black people from fully belonging in Chile. Their argument is based in white supremacist ideas of Chilenidad that promote Chile as a whiter, more civilized, and more “advanced” Latin American nation.  One clear manifestation of rhetoric of superiority can be seen in the state language around immigration. Officials, including President Piñera, have stated on several occasions that immigrants are taking jobs from Chileans, and the former Minister of Health claimed a rise in HIV infections was due to immigration. As we have seen in other newly immigrant-receiving nations such as Italy, Switzerland, and Sweden, in Chile some nationalists have come to view immigrants—Black immigrants in particular—as “intruders” ruining the project of national modernization.

In the summer of 2020, massive protests against police violence and racism took place across the globe in response to the murder of George Floyd in the United States. There were demonstrations in Brazil, Colombia, Cuba, Italy, Japan, Nigeria, and Sweden, among other places. In each of these countries, Floyd’s face and the words “Black Lives Matter” written in English appeared on signs, murals, and in protesters’ multilingual chants. The global dimension of the protests surprised many people in the United States; in particular, the idea that racism and anti-Blackness exist in predominantly Black countries like Cuba or Nigeria was quite shocking to many people. Likewise, newer immigrant-destination countries like Chile and Italy were surprised by the “sudden” rise in anti-Blackness they were experiencing. These countries blamed the violence not on structural white supremacy but on so-called “cultural and ethnic differences” between nationals and Black immigrants.

But xenophobic anti-Blackness is hardly new, just as police violence, whether in the United States or Chile, is not a novelty. Rather, these recent iterations are manifestations of ancestral violence grounded on the colonial regimes that shaped the construction of modern nations from Chile to the United States to Italy, and that produce Blackness as always foreign, exotic, ahistorical, and unbelonging to the nation-state. As countries become “immigrant hubs” in the new millennium, they also begin to erect internal borders to separate “them”—Black, Brown, and Muslim migrants and their citizen children—from “us”—white or mestizo, Christian, or secular nationals. As nations like Chile build their figurative border walls to exclude new citizens of color through rhetoric and legislation, they reach back to the repertoire of colonial violence that is foundational to the nation. These practices naturalize the contradictions of progress and violence, in essence expressing, “We are a progressive nation of laws, but we do not want intruders that would mess up our progress.” Using citizenship as a rubric to define belonging and human worth, nations like Chile get away with inflicting violence against immigrant communities, for they are not “us.”

The death of Joane Florvil teaches the world about the global reach of state-sponsored anti-Black violence as it intersects with immigration, anti-Indigeneity, and nationalism. Yet, while Florvil’s death gained national attention, her name is virtually unknown outside of Chile. There are scarce reports about her murder in international media. But Florvil didn’t just die in Chile. For those of us living the cost of global anti-Blackness, seeing Florvil’s death is a reminder of the prevalence of Black death everywhere. Her passing echoes the loss of women like Sandra Bland, who died by hanging on July 13, 2015 while in custody in a Texas jail after an unjust arrest, or like Brazilian activist Marielle Franco, assassinated in March 14, 2018. Like Bland’s in the United States, Florvil’s name became a symbol of anti-racist activism in Chile, particularly amid the global uprising against anti-Black police brutality in the wake of George Floyd’s murder. Unlike, the names associated with the U.S. Black Lives Matter movement, though, Florvil’s remains widely unknown outside the country where she died. Chilean anti-Blackness killed Florvil, but Chile is not imagined as a site of Blackness and not, by extension, anti-Blackness.

Florvil’s death begs us to understand the cost of global anti-Blackness and the need to confront white supremacy by asserting that Black lives matter everywhere, in every language. That confrontation is never easy, never welcome, and always in tension with capitalist ideas of progress and success. And yet, that confrontation is the only way to move forward: to truly become a nation—a world—in which Black, Brown, Indigenous, and Asian lives are valued and white supremacy does not reign. We are far from getting there; as Black feminist activist Paula Palacios, who organizes for Black women’s rights in Chile, says, “the road is steep,” and we are tired. But we have no choice. We must continue to demand historical justice, reparations, and recognition for all oppressed people. That is the right direction, even when it is taking so long.

Lorgia García-Peña is a scholar of Latinx Studies in the Department of Studies in Race, Colonialism and Diaspora at Tufts University and the co-founder of Freedom University. She is the author of the internationally acclaimed book The Borders of Dominicanidad: Race, Nation and Archives of Contradictions.