José de Echave on the Future of the Left in Peru

The 2021 vice presidential candidate for Juntos por el Perú (Together for Peru) discusses what we can expect from the Castillo government and possible alliances with other sectors of the Left. 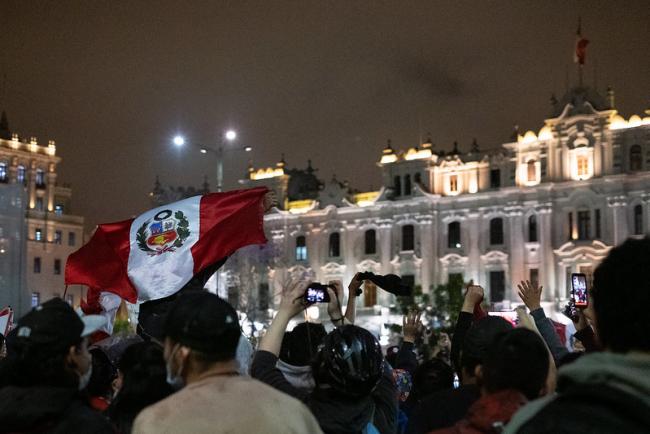 This interview has been edited for length and clarity.

On Wednesday, Pedro Castillo was sworn in a president of Peru. Representing the Perú Libre party, Castillo is a teacher and union leader who has never held public office. Castillo beat right-wing politician Keiko Fujimori. She fought for six weeks after the second round of voting, alleging fraud, which was never proven. The inauguration marks an important shift in Peru, as a rural leader, despised by the Lima elite, takes office. Paulo Drinot, professor of Latin American history at University College London, interviewed José de Echave, who ran as vice president on the ticket of Verónika Mendoza of the Juntos por el Perú (Together for Peru) party on the meaning of the elections and prospects for the Left going forward. Drinot is de Echave's nephew.

PD: Why did you decide to run as Vice President on Verónika Mendoza’s ticket?

JdE: I worked as an advisor to Verónika Mendoza in the 2016 presidential campaign, and since then we continued to work together in different spaces. Also, we are both focused on extractivism and the environmental agenda, especially in the upper provinces of Cusco (Chumbivilcas and Espinar). This time around, she invited me to join her on the presidential ticket and I thought it was a good opportunity. This has been my first electoral experience as a candidate.

From my point of view, Verónika and a group of youth leaders represent a generational shift for the Peruvian Left. This process will involve a change in political practices, organizational structures, etc. I think it’s the duty of my generation to support this process.

PD: In 2016, Verónika Mendoza received 18 percent of the vote in the first round. Her candidacy generated a lot of anticipation and her support for PPK [former President Pedro Pablo Kuczynski] in the second round was decisive in defeating Fujimorism. In 2021, she got less than half as many votes, only 8 percent. What happened? Why wasn’t it possible to build on the results and the anticipation of the 2016 elections?

JdE: There are several factors. First, the social, political, and economic context has changed significantly. It’s also important to mention the pandemic. This has been an unusual situation and the parameters changed. In 2016, Verónika represented a new face in politics. Five years later, she is more well-known. Creating her own movement (Nuevo Perú) has been a complicated process. It’s not easy to create a political party with limited economic and logistical resources, without a group of dedicated, full-time supporters, especially when not even the main leaders have the resources they need. Meanwhile, negotiations with other political players, among them Perú Libre, took a toll on Nuevo Perú, with Indira Huilca, Tania Pariona, Marisa Glave, and other leaders leaving.

This caused attrition. And lastly, the visibility of Verónika’s campaign made her a target for attacks: for being accused of being a terruca [in effect of being a terrorist, i.e. pro-Shining Path] pro-abortion, supportive of the LGBTQ community, etc. All of this had an impact in the territories, especially in the Southern Andes, where people can be very radical on some issues but conservative on others. 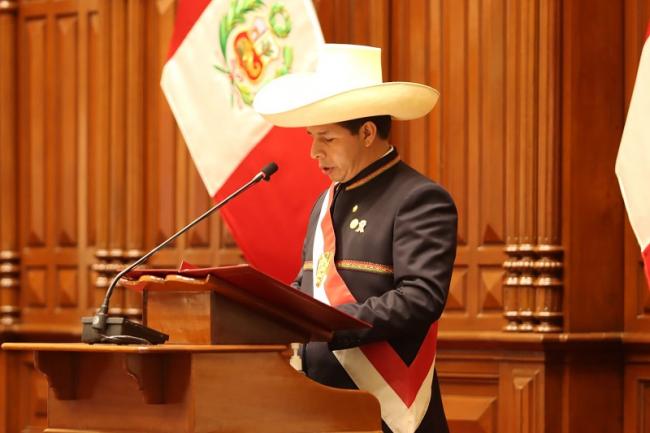 PD: Pedro Castillo’s victory was a huge surprise to many people. How do you explain it?

JdE: The victory of Castillo and Perú Libre can be explained by several factors. First, the impact of the Car Wash investigation: nearly five years of revelations that showed the depth of political corruption, which has spanned the spectrum of the political class, regardless of their orientation, left or right.

Second, everything that happened in the past year, not even including the pandemic: the shutdown of Congress, elections to complete the parliamentary term in January 2020, a new Congress that, with a few exceptions, has been disappointing, Martín Vizcarra vacating the presidency, the political crisis of Manuel Merino’s government that lasted only a few days in November, the social mobilizations that were fiercely repressed and where two youth were killed. All of this created a climate of discontent and exhaustion that shook the political class.

This created a space that an alternative candidate, outside politics as usual in Peru, could take advantage of. The Castillo phenomenon repeated to a great extent the Fujimori phenomenon of 1990. The fact that Castillo was not a visible candidate for most of the process meant that he could develop a campaign in direct contact with people, very present in the territories (despite the pandemic and the second wave), without being hit by criticisms or attacks.

There is a base of leftist voters who support a more radical discourse in some issues but are openly conservative on others, like gender, LGBTQ rights, decriminalizing abortion, and so on. Five years ago, their support went to the ex-governor of Cajamarca, Gregorio Santos, who got five percent of the vote and effectively blocked Verónika Mendoza from going to the second round. This base was Castillo’s stronghold.

PD: The political scientist Alberto Vergara wrote an article calling for a “civilized Left” in Peru. The Right’s reaction to Castillo’s victory suggests that what Peru needs now is a civilized Right. Is a civilized Right possible in Peru?

JdE: The Right in Peru today has serious representation problems. In the 2011 and 2016 elections, Keiko Fujimori and Fuerza Popular were their obvious first choice. It’s not for nothing that briefcases of money from economic interest groups went to the coffers of Fujimori in those electoral processes. This year, the question was who would these economic interests, like the Romero group, give their money to? While there were various options, none of them offered the same guarantee that in previous elections Fujimori had offered.

Keiko Fuijimori was worn out by the judicial processes, her time in jail, and the discrediting of her block in the previous Congress. This meant the Right was even more divided than the Left in these elections. In this scenario, other voices, including some who were recently marginal, emerged: an ultra-conservative like Rafael López Aliaga, a washed-up and anachronistic Hernando de Soto, the authoritarian populist Daniel Urresti, among others. Ultimately, Keiko Fujimori got to the second round for the third time and the other interest groups had to align with her, showing their darkest tendencies: intolerance, racism, violence, disdain for Peruvians from rural areas, authoritarianism, etc.

Everything indicates that it will be difficult for the Right to rebuild a new political image. The impact of Fujimorism for the Right in the past decades is perhaps of the same magnitude as the impact of the Shining Path on the Left. It will take time to see a civilized Right and especially one with electoral potential. It’s highly likely that characters like López Aliaga will fight to represent the Right in the coming years. Other representatives of the Right will radicalize to be able to compete on his terms. We have seen signs of this in the past months with the refusal to recognize the election results.

Over these months the business sector has also divided. The powerful Confederación Nacional de Instituciones Empresariales Privadas (National Confederation of Private Industry Institutions, Confiep) split, with the non-traditional exporters (Asociación de Exportadores) and other sectors including the National Society of Industries forming a new business organization. The problems in Confiep are not only due to its politics and identification with Fujimorism, but also because it did not effectively deal with the corruption cases that implicated several of its members.

PD: What do you expect of the Castillo government? What do you think its priorities should be?

JdE: I think that the priority should continue to be public health—to complete the vaccination process and prepare the country for a possible second wave. Following that, economic recovery, especially in employment. More than 2.5 million jobs have been lost. I think that the Castillo government should prioritize key sectors like agriculture and small to medium-sized businesses. The proposal of a second agrarian reform is very important and has created a lot of expectation in rural areas, especially in the south of the country. In terms of mineral prices stabilizing, the presence of mining must be balanced with protecting the rights of neighboring communities and nature. Above all, we cannot lose sight that Castillo is inheriting a complicated situation regarding mining conflicts. Lastly, the new government should implement a comprehensive tax reform to restore public finances and sustain social spending, especially for health and education. We have to remember that the tax rate in Peru is among the lowest in Latin America.

PD: What do you expect the relationship to be between Mendoza’s Together for Peru and the Castillo government? Castillo’s apparent social conservatism has been criticized in comparison to Mendoza’s progressivism. Should these differences be settled and how so?

JdE: I hope that it continues to be a collaborative relationship. The alliance between Together for Peru and Nuevo Perú was key in the second round campaign, with the development of the Bicentennial Plan, and the final stretch ahead of Pedro Castillo’s victory, to calm tensions with economic actors. I hope that we can form a solid cabinet with a wide base to take on the challenges that lay ahead. The task will not be easy because we must build a corresponding base in the Congress, which requires alliances with other political forces. Yes, there are differences between the two political parties, which means there is a lot of work to do together.

PD: What is the future of the Left in Peru?

JdE: We must work toward the future, we have to build it. It’s not going to fall from the sky. I’ll go back to an idea I mentioned at the beginning. There are excellent conditions for a new generation of Left politics to take the lead in a regenerative process. This must include political and organizational practice, and be open to the people, especially young people, in order to create a new consensus. Even so, there is a lot of work to do, and we have to create the conditions so that this process can come to fruition. At the same time, the Left must recognize and articulate with a whole range of other social actors and their organizational reference points. This will allow us to spread out in different territories and avoid replicating the same organizational patterns of organized labor and campesinos, which are no longer as representative.

José de Echave has a PhD in Latin American Society Studies (economic focus) from France, a degree in International Economics and Development from the University of Paris I, Sorbonne and a postgraduate degree in in-depth study (economic focus) from the La Sorbonne Nouvelle. He has worked as an advisor for mining unions and communities affected by extractive activities. He was Vice Minister of Environmental Management in the Ministry of Environment in the Ollanta Humala administration (2011-2016), a post which he resigned during the Conga conflict in Cajamarca, openly questioning the state’s approval of the project’s environmental impact assessment. He was co-founder of the Peruvian institute CooperAcción and has been a consultant for the Economic Commission for Latin America and the Caribbean (CEPAL) and the International Labor Organization (ILO)

Paulo Drinot is a professor of Latin American history at University College London and José’s nephew.