Regional health cooperation should be an "epidemiological shield" for Latin America. But the deterioration of coordinating bodies has caused joint responses to falter. 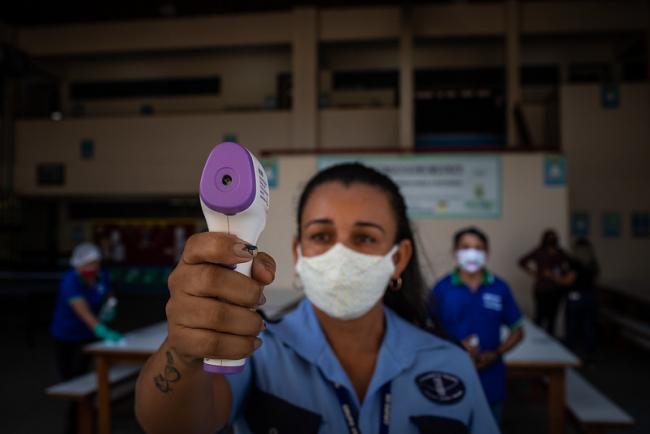 This article was originally published in Spanish by Nueva Sociedad.

Responses to the Covid-19 pandemic in the past year were often limited to unilateral actions, inhibiting coordination and deepening global asymmetries and inequalities. Debilitated multi-lateral health systems and geopolitical disputes between China and the United States contributed to these trends. The international health cooperation system is increasingly at the mercy of conflicting interests and disputes. It has proven ineffective in solving pressing problems of health and development. In Latin America, the increasing fragility of regional integration further limits the margin of action for countries during the pandemic.

The availability of Covid-19 vaccines is both a historic achievement, due to their rapid development, and the beginning of a new stage for the world. Countries must now design the logistics to acquire and distribute vaccines, while the disease continues to ravage much of the world. Europe is going through a second wave of the pandemic and Latin American and Caribbean countries continue facing difficulties to control the disease. Will regional cooperation in Latin America be up to the task?

The strategies to confront Covid-19 in Latin America and the Caribbean have had a common thread: they have been unilateral and isolated, defined by a diminished programmatic health agenda and regional integration structures. Meanwhile the region continues to be the most unequal in the world, and, according to the Economic Commission for Latin America and the Caribbean (Comisión Económica para la América Latina y el Caribe, CEPAL), it will suffer the worst impacts in socio-economic indicators.

Latin America has not been passive in the face of the pandemic, but the initiatives of different regional blocks have been disarticulated. Due to political distance between countries and a lack of leadership, the possibility of achieving cohesive policies has been hindered.

In almost all the Latin American blocks, the principal strategies were based in making high-level political declarations, publishing reports of epidemiological data, and hosting virtual forums about the pandemic. Some blocks have made progress on more concerted actions. The Regional Integration System of Central America (SICA) and the Caribbean Community (CARICOM), for example, strengthened their regional epidemiological surveillance strategies and debated the adoption of joint negotiation mechanisms to acquire medications to treat Covid-19. The Southern Common Market (Mercado Común del Sur, Mercosur) mobilized regional funds to provide emergency financial assistance and purchase materials and diagnostic tests, actions which SICA also took. Additionally, SICA signed technical cooperation agreements with developed countries and strengthened its cooperation with other Latin American countries.

The actions of Mercosur and the Andean Health Organization-Hipólito Unanue Agreement (ORAS-CONHU), in addition to public statements, have been oriented toward structural surveillance and response operations. The Community of Latin American and Caribbean States (CELAC) tried to strengthen cooperation with other international organizations including the Economic Commission for Latin America and the Caribbean (Cepal) and the Food and Agriculture Organization of the United Nations (FAO). The recent creation of the Forum for South American Progress (Prosur), despite important political statements, has not led to concrete coordination strategies to confront the pandemic.

While some organizations have held virtual events to debate the topic of Covid-19, blocks have only recently developed more specific coordination strategies. One example is collaboration between ORAS-CONHU, the Organization for the Amazonian Cooperation Agreement (OTCA), and the Social Institute of Mercosur, a partnership which seeks to optimize resources and design strategies for Indigenous health and the challenges facing the border regions of the Amazonian countries.

In summary, the health crisis has revealed regional fragmentation. It is now clear that the alliances between regional blocks have been insufficient to fight a pandemic. In addition, one of the groups that had a protagonist role in regional health, Unasur, has dissolved and all but three out of 12 countries have stated their intention to leave the block. CELAC has attempted to take on a leadership role and seek regional cooperation to face the challenges of local and global health and universal access to treatments and vaccines for Covid-19. However, up to this point, it has not had much success.

In the context of a health crisis, regional coordination is a valuable means for countries to leverage their capacities, complement actions, avoid duplicating efforts, and to learn from each other’s experiences. Regional articulation and coordination could have contributed to more effective responses to the pandemic. Following the experience of Unasur, the pandemic has confirmed that coordination at all three levels—national, regional, and global—are fundamental. At the national level, regional coordination is necessary to shore up local capacity and to strengthen health systems to respond to increased demand and cover the necessities of medical equipment and supplies, a critical issue in many countries of Latin America during the pandemic. At the regional level, joint action is needed to strengthen cross-border cooperation, to guarantee flights to transport equipment and vaccines, and to share data and promote mechanisms to acquire supplies. Finally, at the global scale, coordination facilitates opportunities for multilateral organizations to join forces and negotiate as a block, understanding and defending health as a human right. Joint action also sets the stage to reduce asymmetries that have been obvious during the pandemic and will be even more crudely reflected during the roll-out of vaccines.

The development of vaccines against Covid-19 takes place as some countries face second waves of the virus and others have not managed to contain the first. It also marks the beginning of a new stage in the fight against the disease. The World Health Organization (WHO) has said that humanity needs around two billion doses of vaccines during 2021 to immunize just health professionals and high-risk populations. Nonetheless, the 27 states of the European Union along with five other rich countries have already reserved approximately half of the vaccines that will be available, while they only represent 20 percent of the world population. The race between the world’s richest countries to assure a supply of vaccine doses compromises that capacity of most countries to acquire them, creating a shortage in the short term for middle- and low-income countries, where most of the world population lives.

Despite several initiatives seeking temporary exemption of patents for vaccines, like the request to the World Trade Organization by India and South Africa, or the initiative between the WHO and Costa Rica to guarantee equitable access, it seems that the countries that pay the most will be the ones with access to the first vaccines. Vaccine access so far preferences purchasing power and market competition over public health.

Vaccines should be a global public good, and for that, global mechanisms should be established to avoid market competition and “vaccine nationalism.” This scenario gives Latin America and the Caribbean a new opportunity to join forces to confront Covid-19 and pursue production, purchasing, and distribution of vaccines, in addition to epidemiological surveillance. Considering the post-pandemic scenario, health cooperation will be a fundamental tool to combat the spread of poverty and inequality in the region, which the pandemic has fueled. The accumulated experience of Latin American countries and cooperative strategies to reduce inequality and promote development give hope that it is possible to follow this path in the health sector.

The concepts of “epidemiological shield” and “health sovereignty,” emerging from the Unasur process, are milestones in the construction of an articulated Latin American regionalism, in which cooperation and integration lead to benefits strengthening the region and improving each country and its health policies. A South-South “epidemiological shield” could be a regional and inter-regional institutional tool to offer appropriate and politically backed epidemiological responses.

It is obvious that no country can take on this problem alone. Cooperation is essential. The pandemic put the international community to the test and shown the necessity of solidaristic regional relationships. In South America, events like the victory of the Frente de Todos coalition in Argentina, the Movement Toward Socialism (MAS) in Bolivia, and the overwhelming majority that approved the Chilean referendum for a new Constitution beg the question of what path Latin America will take in regional integration and cooperation.

As the pandemic continues, health has the potential to be the motor of renewed regional cooperation and an opportunity to strengthen and rebuild sovereign spaces for Latin American integration. This is one of the legacies of the integration process supported by Unasur.

María Belén Herrero is a sociologist and a doctor in Social Science from the University of Buenos Aires, specialized in Epidemiology. She is currently an Assistant Researcher at the National Council for Scientific and Technical Research of Argentina (CONICET) in the International Relations Area of FLACSO Argentina. She has been a researcher at the Center for State and Society Studies (CEDES) and a consultant at the Pan American Health Organization (PAHO).

Beatriz Nascimento has a degree in Social Communication from the Federal University of Rio de Janeiro and a Master's in Public Health from the National School of Public Health/Fiocruz.