A comparative look at Pink Tide governments across the region and the impact of their policies on the extractive sector and development processes in the early 21st century. 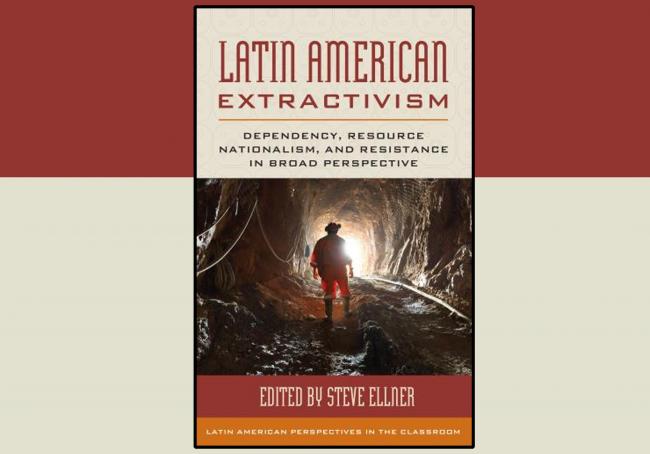 On September 26, 2000, during the inauguration of the second summit of the Organization of Petroleum Exporting Countries (OPEP), President Hugo Chávez urged its members to recognize that the “worst environmental catastrophe facing the world is human poverty.” He called for unity through the promotion of a “social and egalitarian model of economic development to eradicate poverty” in member countries. Until his untimely death on March 5, 2013, petroleum, and the profits it produced during the commodities boom (2000-2014), would be at the heart of Venezuela’s extractive development model and foreign policy.

The election of Chávez as president of Venezuela in 1998 marked the beginning of the Pink Tide, a period when several progressive governments came to power in Latin America. Left-leaning leaders were elected in Brazil (2002), Argentina (2003), Bolivia (2005), Uruguay (2005), and Ecuador (2006). Citizens chose these Pink Tide governments in reaction to the disastrous social consequences of the Washington Consensus’s neoliberal policies. Although they emerged in different socio-cultural, political, geo-political and economic contexts, Pink Tide governments in Latin America shared the goal of restoring the role of the state in the development process and reclaiming their sovereignty over natural resources. Dependent on the export of commodities such as soy, petroleum, and natural gas, Pink Tide governments benefitted from the rising world demand and resulting high prices of their products. The surplus created by the commodities boom allowed these governments to aggressively increase social spending and pursue redistributive policies that aimed to reduce poverty and inequality. Politically, some of these governments also sought to promote “participatory democracy,” an attempt to empower citizens “from below” to help design and implement policies that directly impacted their lives. In South America, Pink Tide governments actively promoted a type of integration based on the logic of politics rather than one of economics and trade, which had been favored during the neoliberal period.

Pink Tide governments evolved in different contexts, so the results of their extractive development strategies were varied. Analysts across the political spectrum, however, have tended to simplify—and in some cases vilify—the Pink Tide governments, failing to account for the variety of contexts, policies, and strategies for dealing with the social ills and extractive sectors of their countries.

Steve Ellner and his contributors explore these and other important questions in the book Latin American Extractivism: Dependency, Resource Nationalism, and Resistance in Broad Perspective. More than any previous work, this book takes an objective look at the Pink Tide and non-Pink Tide government policies toward the extractive sector and their impact on the development process in the first two decades of the 21st century. Through an in depth look at cases from Argentina, Bolivia, Colombia, Ecuador, El Salvador, Honduras, Mexico, Peru, and Venezuela, the book explores the complex logic of the extractive development model during this time and its relation to national and global capital. It examines how the Pink Tide approach differed from that of the neoliberal period, and how different governments, progressive and conservative, dealt with opposition to the extractive development model from environmental and indigenous movements.

The book also provides a constructive critique of “neo-extractivism” theory, which asserts that, although taxing the extractive sector produced profits that helped promote economic development and social welfare, the strategy ultimately proved detrimental to democracy and development. According to this view, neo-extractivist activities led by foreign capital promoted a development model that was not very different from dependent extractive models of the past. It replicated the “peripheral” nature of these countries in the global economy and did little to enhance the quality of democracy, protect the environment, or defend rights of indigenous people, women, and Afro descendants. This record, the argument goes, overshadows any positive impacts claimed by Pink Tide governments and their supporters.

Steve Ellner and his contributors take issue with this “pessimist view.” While they recognize that Pink Tide governments have a poor record in transforming the extractive development model and attempting to change their countries’ “peripheral” position in the global economy, they point also to the undeniable harm that the extractive model has had on the environment and local communities. The authors recognize how Pink Tide government policies toward the extractive sector allowed greater resources to be allocated to social spending to mitigate poverty and ask that we pay closer attention to some of the positive outcomes of legislation and policies toward foreign capital under different Pink Tide governments. The book analyzes several cases of policies and legislation which varied from country to country and produced distinct results in different contexts.

Ellner emphasizes the importance of context in analyzing the record of Pink Tide governments in the introduction. He writes that “…this context includes the full range of policies associated with extractivism, Latin America’s historical condition of underdevelopment, and the aggressiveness of the domestic and foreign opposition to progressive governments.” Failing to recognize context, Ellner argues, has had “unintended consequences.” In several countries “recent cases of instability and regime change” can be traced back to neoliberal political leaders that, with U.S. support, “have used illicit means and repression in an attempt to roll back reforms initiated by Pink Tide governments.” No doubt that when analyzed in context one understands that the experience of different Pink Tide governments cannot be painted with the same brush, let alone compared with the experience of how conservative governments dealt with the extractive sector—and opposition to it—in the first two decades of this century.

Latin American Extractivism is organized in a way that is easy to read and ideal for classroom use. In the introduction, Ellner provides a comprehensive summary and critique of neo-extractivism and successfully places it in a broader context using evidence from the cases analyzed in the following chapters. In Part I (The Global Focus) the authors examine Colombia, Bolivia, and Venezuela to show the relationship between key aspects of globalization and its impact on extractivism at the national level. The next two sections are dedicated to the experience of different Pink Tide governments (Part II) and Conservative and Right-Wing governments (Part III). In Part II, the authors present evidence from Venezuela, Bolivia, Mexico, Ecuador, and Argentina, that shows how different governments increased their control of extractive industries and how they dealt with the environment, protest movements, and the territorial rights of local and indigenous communities. The chapters in Part III on El Salvador and Honduras, Peru and Colombia show how resource nationalism and the management of environmental and opposition movements in these countries differed from the cases in Part II. The variety of practices and outcomes make it clear that it is necessary to look at the specific context to understand the extractive development model in Latin America over the past two decades.

The petroleum giant Venezuela, in particular, illustrates the importance of examining the experience of the Pink Tide in context. This was implicitly acknowledged by Chávez on January 16, 2003 at the United Nations. He said at the time that “…the only sin we have committed in Venezuela is to dare, for the first time in a hundred years, to face the gross privileges of a senseless and insensitive oligarchy that has carried a people that lives on top of gold and oil…to a degree of poverty that surpasses 80 percent of our population. That has been our sin.” This statement came after an attempted coup d’etat in April 2002 and a devastating petroleum strike in late 2002 and early 2003 by the state oil and gas (PDVSA) workers and technocrats that cost the nation billions of dollars. Both actions were supported by foreign interests that opposed the administration’s extractive development model that reverted efforts to privatize PDVSA and, in turn, reverted the neoliberal process in that South American country.

As the past few years have shown, “resource nationalism” and the the Chávez administration’s distributive policies cannot be understood in isolation from the structure of the world economy, the national and foreign interests in the extractive sector, the Venezuelan economy’s dependency on petroleum, and the geopolitical powerplay around this natural resource. Ellner and his contributors argue that this also applies to other Pink Tide governments and should be considered when analyzing their extractive development models and redistributive policies.

Ellner’s book is another successful publication of the Latin American Perspective in the Classroom series. It is a must-read for anyone interested in the complexities of the relationship between the extractive sector and development in Latin America in the age of globalization.

Angelo Rivero Santos is Teaching Associate Professor and Director of Academic Affairs at the Center for Latin American Studies at Georgetown University.