Kimberly Theidon’s book explores the conjoined legacies of war-time violence against women, children, and nature in Peru and Colombia. 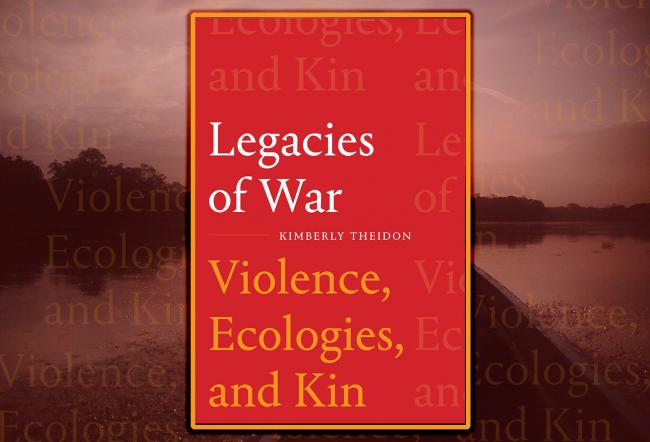 Kimberly Theidon’s Legacies of War: Violence, Ecologies, and Kin, is urgent, timely, and heartbreaking. The book is about children born as a result of sexual violence in times of war, about these “living legacies of rape and sexual violence,” and the women who endure(d) such violence and its ongoing repercussions. It is about women’s agency, heroism, and resilience in the face of brutality. It is also a call to reimagine—in a more grounded, nuanced, and complex way—the policies and politics designed by governments and international agencies to address these harms, as well as the particular needs of these women and children. As an invitation to think “beyond stigma” with Indigenous theorists and others, the work offers an expansive reading of the meanings of reproductive harm and justice beyond the human, insisting on a “gendered recognition of the human and more-than-human legacies of armed conflicts.”

Theidon’s analysis is anchored by long-term ethnographic research in Peru, with a focus on the impact of the internal armed conflict (1980-2000), and Colombia, in the context of transitional justice and peace-building efforts. Colombia, notes Theidon, was the first country to recognize children born of wartime rape as potential recipients of reparations. Her work also speaks directly to current debates over reproductive rights in the United States, particularly the implications of the ongoing attacks against a woman’s right to a safe abortion. She begins her book by calling attention to the invisibility of children “born of war,” particularly striking given the increased focus on conflict-related rape and sexual violence over the past three decades. United Nations resolutions have addressed sexual and gendered wartime violence—particularly against women and girls—since the mid-1990s and emphasized the need for access to sexual and reproductive health services, including regarding pregnancies resulting from rape. But as Theidon notes, “there is nothing said about the outcome of those pregnancies, nor about their meaning for the mothers and their children.” She continues: “I suspect that one reason children born of wartime rape were and have, to some extent, remained invisible on the international agenda is because there is no reasonable way to discuss this issue from a ‘survivor-centered’ perspective without addressing a woman’s right to abortion—a woman’s right to refuse to lend her body to nine months of reproductive labor.”

Theidon offers a powerful analysis of the brutal impact of U.S. antiabortion policies, enforced during Republican administrations since 1984, which prevented any foreign organization receiving U.S. global health assistance from providing information about or services for legal abortion, or even from advocating for access to abortion services. She shares stories of unspeakable horror: gang rape resulting in pregnancy, botched abortions, birth defects resulting from the rape of a pregnant woman and harm done to the fetus. While some may find the material triggering or too harrowing to read, Theidon’s insistence on telling these stories is one way to expose the harms of U.S. and international agendas. As she writes, “sidestepping abortion in publications, policies, research, and interventions does a gross disservice to rape survivors and to the children they may unsuccessfully try to abort.”

But these stories also offer a more complex portrait of the experiences of these women and their children, experiences that complicate and sometimes contradict assumptions made about them and their lives, and that expand our understanding of reproductive harm and justice to include alternative ecologies of care and nonhuman relations. For example, in Chapter One, Theidon challenges the use of stigma to describe the experiences of women survivors and children born of war. She does this in part through a fascinating, if disturbing, discussion about the names mothers give to children born as a result of wartime rape. She shares the story of Chiki, a Quechua boy conceived when his mother was gang raped by Peruvian soldiers. This name, Theidon explains, was “[a] painful name for a young boy, who in turn was a painful child for his mother” because in Quechua, chiki means danger and refers to a warning that something bad is going to happen. In this case however, this boy was a “‘future memory,’ a perverse distortion of time. He could not be a warning; it was too late to avert this particular danger. Rather, he was the product of an evil event his mother had been unable to escape. His mere being extends his mother’s memory both to the past and into the future. Her son is a living memory of the danger she survived as well as a reminder that nothing good could possibly come from this chiki she had failed to avoid.”

It was Chiki who inspired Theidon to think in a more complicated way about the impact of sexual violence in war, and about the “audible impact of names” and what they reflect about the lived experiences of women and children in this context. She includes a list of dozens of names from at least 10 different countries, names that call attention to the fact that these children were born of war: “mixed meat” (Bosnia), “monster babies” (Nicaragua), “American infected babies” (Vietnam). As Theidon argues, these names “challenge the common assumption that rape and other forms of sexual violence are always shrouded in secrecy and silence.” They narrate the past and the legacies of trauma in the present, and perhaps reflect a refusal to “shoulder the shame for an act of violence done to her…. These names express pain, and in equal measure may serve to cast judgment on those who would dare to blame these women for the violence they survived.”

These names, then, open up space for moving beyond stigma and “into the realm of practical kinship and lived experience.” They invite us to consider “a broader repertoire of potential meanings and motivations for the acceptance or rejection of these children by their mothers, families, and communities.”

As Theidon asks us to move beyond facile assumptions about these women and children, she similarly asks us to expand our analytical focus to consider the connections between reproductive and environmental harm and justice. She brings diverse scholarly fields into conversation—e.g., epigenetics, material feminisms, environmental humanities, medical anthropology—and draws inspiration from Indigenous scholars, activists, and interlocutors in Peru and Colombia. In Chapter Two, she explores women’s bodies as “historical processes and historical sites,” as part of the social landscape of terror and as vehicles for the transmission of trauma and fear. She thinks through the ways bodies and environments are coproduced; the ways mothers are made into environments for fetuses and the impact of violence—sexual and otherwise—on those bodies. “War,” she writes, “can make for a toxic environment, and rape followed by forced pregnancy can in turn make the maternal environment inhospitable.” But she also cautions against the centering of the maternal body in ways that reproduce gendered harm and surveillance. “If the environment that is made to matter leads to a myopic focus on the womb and its (dis)contents, the peril lies in obscuring the multiple environments in which conception and reproductive labor unfold…[and in] placing sole responsibility for pregnancy outcomes (or terminations) on those women who were violently made into ‘maternal environments.’”

Chapter Three brings nature, as a victim of war, more fully into focus. Ethnographically rich, this chapter centers the complicated and heart-wrenching dynamics of political violence in Colombia, and more specifically in Urabá, a biodiverse region in the northwest of the country that is home to Indigenous and Afro-Colombian communities as well as mestizo peasant farmers. This is a region that has been drastically impacted by extractive industries, militarism, paramilitarism, and guerrilla warfare. And it is home to a large part of the Atrato River, a central figure in networks of kinship and care for communities in the area, and a living being who was recognized by the Colombian Constitutional Court as deserving of rights. This was a ruling made possible thanks to Law 1448 (Ley de Víctimas y Restitución de Tierras), which, among other things, acknowledges that Indigenous territory is “a living integrity and sustenance of identity and harmony… [and] suffers damage when it is violated or desecrated by the internal armed conflict....”

Theidon argues that by expanding beyond anthropocentric liberal frameworks, this law opened up many possibilities. Theidon also engages with the work of the Special Jurisdiction for Peace led by Indigenous judge Belkis Izquierdo to further develop her previous exploration of “maternal environment,” the political ecology of reproductive labor, and the importance of expanding discussions of reproductive justice to include nonhuman life in multiple ways. For Theidon, this more expansive “approach to reproduction could allow for greater attention to…communities that embrace or reject children born of wartime rape; to injurious names that may mark a child in lasting ways; to account for postwar landscapes seeped in toxins,” and it could push against the surveillance and governing of maternal bodies.

The connections Theidon is trying to illuminate between reproductive and environmental politics are ones that Indigenous peoples have been clear about for centuries. Theidon asks her readers to think with and learn from Indigenous ontologies and epistemologies as one path toward reimagining international policy, transitional justice, and “rights.” Despite the radical possibilities opened up by Law 1448, for example, the transformative potential of the Peace Accords or other efforts at transitional justice and reparations are constrained when they are embedded in narrow liberal rights frameworks. She unpacks this further in the final chapter, where, following the work of Ruth Rubio-Marín, she advocates a move from a “rights-based” to a “harms-based” gendered approach to transitional justice efforts. This would entail a move away from specific forms of remedy in response to human rights violations and toward a focus on “listening to women and to how they describe their experiences of sexual violence, forced pregnancy, maternity, mothering, mountains, water….”

This was a hard book to read. The material is challenging and disturbing, and at times the connections Theidon calls forth are elusive. But that is part of the contribution. She is calling attention to and showing us the ways seemingly disconnected issues—wartime sexual violence, chronic malnutrition, kin relations with mountains and rivers—are in fact intimately entangled. Paying careful attention to these entanglements, she argues, is crucial to rethinking current policies and rights frameworks that simply don’t allow for the complexity and multiple ways in which women survivors, children born of war, and other-than-human beings experience harm. They are also critical for reimagining repair, healing, and hope.

María Elena García teaches in the Comparative History of Ideas Department at the University of Washington in Seattle. She is the author of Gastropolitics and the Specter of Race: Stories of Capital, Culture, and Coloniality in Peru (UC Press 2021). Her most recent project explores the impact of political violence on more-than-human beings and human-nonhuman relations in Peru.