With Lula Back, the Political Fight in Brazil is Between Democracy and Authoritarianism

Instead of idealizing a non-existent centrist alternative, those who still believe in democracy in Brazil should appreciate Lula’s return to the political arena. 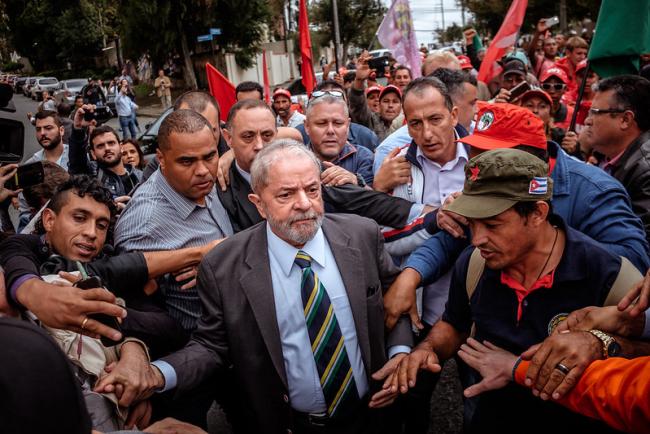 Lula was imprisoned in April 2018 at the Federal Police headquarters in Curitiba, where the Lava Jato, now in the process of being shut down, was based. He was released in November 2019 after serving 580 days, when the Supreme Court finally agreed to examine his case and reinstated the jurisprudence that no one can serve a sentence before it can be reviewed by the country’s highest court.

Lula’s return in full force to the political arena has already shaken up politics in Brazil and will continue to as next year’s presidential election takes shape. Bolsonaro will certainly run for reelection. A possible run by Lula, or his support to someone on the Left, poses Bolsonaro’s clearest counterpoint.

Reinstating Lula’s legal rights could lead to a polarized political match-up. This development has fueled speculation, much of which stresses the dangerous dilemma the country would face in such a scenario. Some have even argued that a head-to-head contest between Lula and Bolsonaro would drag the country down a dangerous path defined by two equally harmful populist options.

This characterization is deeply fallacious and based on a false equivalence. Lula’s possible candidacy, or a run by center-left forces anointed and supported by Lula, represents perhaps the final possibility of rebuilding the country’s democracy. Lula’s presence with full political rights is a necessary step in this direction. Moreover, it is premature for local and international media to promote this type of scare tactics, as it is far from certain that Lula’s will be the candidate.

Lula’s legal standing in next year’s election is not certain. Fachin’s decision did not declare Lula’s innocence, as his ruling only determined that the Lava Jato did not have the correct legal jurisdiction to prosecute the former president because the charges were not directly related to the Petrobras corruption scandals that gave rise to the operation. The formalistic nature of this decision means that the allegations against Lula of accepting bribes from former construction companies with contracts with the federal government could be tried again.

Any future cases would be the jurisdiction of the Federal Circuit Court in Brasilia. It is uncertain whether this will happen, and the case would surely move through the courts slowly. Brazil’s Attorney General’s Office promised to file an appeal in the upcoming days. That could put Fachin’s decision under the scrutiny of four other Justices of the STF’s Second Chamber, though it is unclear whether this would have to take place.

Fachin’s decision not only reinstated Lula’s political rights, but brought him back to the center of Brazil’s political arena. Empowered by the decision, and with his base beaming with excitement, Lula took the spotlight on March 10 when he spoke to thousands of supporters and dozens of domestic and international media outlets. Standing in front of the metalworkers union that he presided over in the late 1970s, Lula reiterated the injustices he had suffered at the hands of Sergio Moro, the former judge turned minister in Bolsonaro’s government who consistently colluded with the prosecution in the cases against the former president. But Lula also made sure to address some of the main issues on Brazilians’ minds. These included the mismanagement of the Covid-19 pandemic, the ongoing economic crisis the country faces, and the prospects of next year’s presidential election when Bolsonaro will run for reelection.

In a remarkable turn of events, former allies of Bolsonaro in the political scene and media conglomerates—including the influential Globo Group that previously promoted Lavo Jato actions to the point of portraying Moro as a hero-like figure—changed the tune of its previous coverage of Lula. Powerful political commentators who had abetted the glorification of Moro in Brazilian public opinion in recent years quickly reacted to save face and published pieces highlighting Lula’s constructive role in Brazil’s democracy. Even the speaker of the House, Arthur Lira, a politician close to Bolsonaro’s regime, in which Moro served until last year, said that the political system could accept Fachin’s ruling. Even more surprising was Lira’s statement that Moro’s actions stewarding Lava Jato were themselves crimes that should not go unpunished.

Lira’s position reflects how the entire Car Wash Operation has been discredited in Brazil in the last year and a half, especially after the publications of leaked internal records about the operation in what became known as Vaza Jato. Though Moro still has significant levels of support, especially among his traditional allies in the middle class, his popularity and viability as a potential presidential contender in next year’s election has waned in recent months. No other politicians in what the media has been trying to portray as the “center” in Brazil, like São Paulo state governor João Doria, have managed to gain traction in recent polls. This means the most likely scenario for the second-round of the 2022 presidential election is between Bolsonaro and Lula.

Media commentators have already denounced this polarized scenario as deeply detrimental to the country, which they say should instead work to find a non-existent, but much sought after, centrist path. A race between Lula and Bolsonaro, with strong names, clear opposing ideological views and policy approaches, and strong backing of enthusiastic supporters on both sides would indeed be a polarized election. It is less clear, though, what this scenario would represent for the country, or even what Brazilian talking heads mean when they refer very negatively to such a divided electoral setting, which is allegedly in the works.

Right after Fachin’s ruling, the Brazilian stock market took a sharp dive, and the country’s currency, the Real, devalued against the U.S. dollar. Economic forces did not appreciate Lula’s return to the forefront of Brazilian politics. But would an election defined by a clear match-up between the extreme Right and the Left indeed be so negative for Brazil? A possible electoral run by Lula would certainly provide the clearest possible counterpoint to Bolsonaro’s government. During eight years in power, Lula expanded social programs, while Bolsonaro’s neoliberal agenda has attacked labor rights and mandatory investments in social programs, like health and education. But beyond the policy dimension, does Lula represent the populist counterpoint to Bolsonaro’s authoritarian appeal? Nothing is further from the truth.

Let’s remember that since the parliamentary coup against Dilma Rousseff in 2016, Brazil has rapidly and dramatically allowed politically motivated, illegal maneuvers to shape its political realm. Beyond the now largely recognized illegal activities of the Car Wash operatives, the country’s military establishment—which never faced accountability for its human rights violations during the dictatorship like in neighboring countries—has reasserted its illegitimate intrusion into politics. As president, Bolsonaro—previously an inconsequential parliamentarian—has given voice to those seeking the definitive closing of the remaining political institutions. As a neofascist leader (though a mediocre one, at best), Bolsonaro’s possible reelection would certainly deepen the weakening of democratic institutions while continuing to destroy the country’s remaining social safety net, which has provided much-needed support to poor Brazilians amidst the borderline criminal mishandling of the pandemic.

Meanwhile, a Lula candidacy, or at least his overt participation in the election, would curb the deleterious trajectory of recent years, especially considering his overture to the political center in his moderate speech on March 10. This would create a path to reestablish the very existence of the rule of law in the country, while also providing a much-need channel to express the very real grievances of progressive forces in the country since at least 2015. Lula’s return to politics is then not only fair, since it is based on a rectification of arbitrary legal actions, but also a precondition for rebuilding the political arena on a democratic basis.

Since his arrest in 2019, the former president has been the main voice of opposition to Bolsonaro anti-popular and genocidal rule. Lula's return to the political arena, with full political rights, should thus be welcome news to those who still believe in democracy in Brazil. The media narrative that this move represents a threat to democracy is not only false but also disingenuous, at best, or hypocritical, at worst.

Since his emergence in the political scene as a union leader, Lula has always valued democratic principles, which he proved during his time in power. His rise to the presidency was built on grassroots mobilization of democratic social movements across the country over many years. Bolsonaro, an irrelevant member of Congress with no clear ideology or even political base until recently, is a direct counterpoint to Lula. But not the one presented by the fallacy of the direct equivalence narrative.

Bolsonaro’s emergence in politics was tied to his personal support for the 1970s dictatorial regime and its use of torture as means of maintaining power. His rise to the presidency was based on the set of lies fabricated by the Car Wash Operation and to his extreme defense of the need to exterminate the Left in Brazil. Comparing these two, very different political figures—a genuine popular leader, with an organic trajectory in social movements and the mobilization against the dictatorship and an extremist authoritarian and an isolated voice in Congress longing nostalgically for the actions of this very regime—as equivalent is at best inappropriate and at worst a cynical narrative device.

The true polarization in Brazil today is not that between two populist leaders, on the Right and on the Left, but rather between those supporting democracy and those supporting the deepening of authoritarianism. Brazil, which until a few years ago represented the promise of political and economic development in the Global South, is mired today not only in economic travails, but a profound crisis of its democracy. The hatred narrative that Bolsonaro’s supporters promote has not only weakened support for programs aimed at social inclusion in one of the most unequal nations in the world, but for the very belief that it is only through deepening democratic values that democracy can be improved.

Those who still support democracy in Brazil must not fall into the trap of populist equivalence between Bolsonaro and Lula, pushed by those who either misread the events in Brazil in recent years or have ulterior motives for doing so. Too much is at stake. This might prove to be the central, perhaps even the last, opportunity to rebuild the country’s battered democratic institutions and the fair application of the rule of law in Latin America’s largest nation.

Rafael R. Ioris is an Associate Professor of Latin America History at the University of Denver.