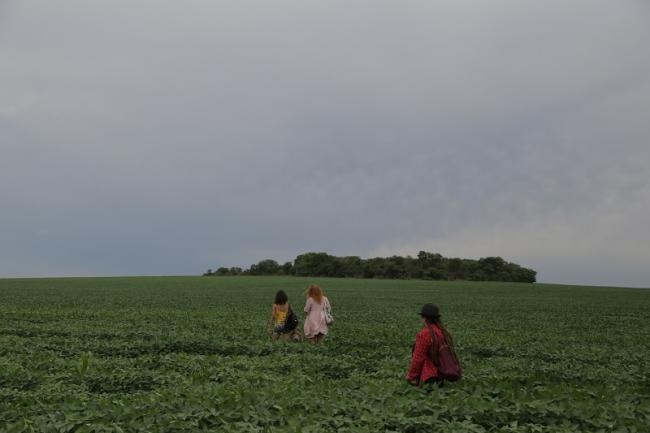 Madalena, the debut feature film of Madiano Marcheti, which premiered this month at the MOMA/Lincoln Center New Filmmakers festival, narrates the aftermath of a murder in a small city along the BR 163 highway in Mato Grosso do Sul. The victim, Madalena, a young trans woman, is discovered in one of the seemingly endless plantations of soy that surround the city, stretching almost unbroken, to the distant horizon.

Most murder mysteries hinge on individual characters: victim, detective, killer. Madalena, however, is not exactly a mystery. Structures, not individuals, drive the narrative. And if we never go looking for a killer it is because, structurally speaking, violence and victims such as these don’t generate much interest or surprise.

The killing that opens the film is all around us. It is inscribed in the place and the mundane details of the everyday: the vast plantations of soy and the menacing-looking machines–loaders, harvesters, seeders and sprayers, tractors, lorries, drones–that populate this world. Human and more-than-human lives, when they do appear, do so at the precarious margins of this highly mechanized agro-industrial geography. This is a place in which life, and some lives more than others, are stripped of humanity. Systematically endangered.

Madalena blends the languages of myth and social realism in ways that evoke the best work of Italian filmmaker Pier Paolo Pasolini. Here, however, city and country have merged and the rural migrants that populated Pasolini’s oeuvre have been uprooted multiple times over. From the Italian countryside to Southern Brazil and from there to the Center West of Mato Grosso, immersed in an a brutally booming economy at the intersection of global commodity chains–corn, soy, beef–that have displaced other lives and ways of living.

These markets, seemingly distant and impersonal, powerfully shape local economies, ecologies, and social structures in ways that have enriched some, like the Bellini family, on whose land Madalena’s body is discovered, while leaving others to fend for themselves amidst the vast expanse of soy. Pasolini’s rural world, patriarchal and brutal, but also human and alive, a possibility that might reemerge in the smell of the grass in an abandoned Roman field where a trans prostitute encounters her young, working class clients, is here a tiny island of forest. A place that marks the center of the film. The refugia from which the story emerges and to which it returns.

Like the 2020 film Bacurau, which won the Cannes Jury Prize, Madalena concerns a Brazil that almost never appears on film. But if Kleber Mendonça Filho and Juliano Dornelles’ thriller was set in a time “daqui a alguns anos” (some years from now), Marcheti’s story is unmistakably here and now. Rather than make the strange and grotesque terribly pedestrian–which is the arguable purpose of Bacurau–Marcheti’s film makes the pedestrian terribly and hauntingly strange.

Rural Mato Grosso is generally familiar to us in terms of agricultural production or, alternatively, in terms of deforestation, ciphered through soy futures or transnational NGOs. We know this place either as the arc of deforestation, or an agricultural heartland that has made Brazil the world’s second largest producer of soybeans. These places and ways of knowing, however, bisect but do not contain the lives encountered in Madalena.

Marcheti began working on Madalena just after the 2012 changes to Brazil’s Federal protections for native vegetation (Law 12651). That law, pushed through Congress by the growing power of the rural lobby or bancada ruralista, was a harbinger of political changes to come. The quasi-legal impeachment of President Dilma Rousseff followed in 2016, and the quasi-legal election of Jair Bolsonaro, thanks to collusion between Judge Sergio Moro and federal prosecutors who worked to maintain leading candidate Luiz Inácio Lula da Silva’s imprisonment.

The often-overlooked 2012 law was the tip of the iceberg. Technically, the law revised specific articles of Brazil’s 1965 Forest Code in order to improve enforcement. But in practical terms, it allowed rural landowners to set aside a smaller percentage of their land for environmental preservation, further marginalizing already isolated ecologies, such as the tiny forest fragments, immersed in soy, that dot Madalena’s landscape.

The remarkable divergence between the native vegetation law’s statutory assumptions and practical effects suggests the pitfalls of legalistic approaches to socio-environmental equity. Rather than protect marginalized environments, the law has normalized markets in land and agricultural commodities primarily responsible for environmental violence.

Similarly, Brazil’s progressive social legislation has failed to produce equity or indeed to protect the lives of LGBTQ people. Violence against trans women has grown even as Brazil’s Supreme Court moved to criminalize homotransphobia. Indeed, the murder at the center of Madalena is not so much resolved as reinforced by the normativity of the law, which as an institutional apparatus appears only liminally, as an elite monopoly over legitimate violence.

As she’s working at her sewing machine, Luziane’s mother, an independent seamstress, gets a message on her phone. “People are terrible, first it’s good morning, then pictures of dead people!” She says. As Luziane takes the phone, she scrolls from the photo of a car crash to another of a young woman in police uniform. “You saw Josi?” She asks. “That’s crazy, becoming a cop.” -“Hey, she’s got a steady job for life” her mom shoots back. Luziane reminds her of Josi’s plans to study law, but her mother insists she’ll pay off her scooter faster as a police officer. This banal reminder of class hierarchies, and foreclosure of other possible futures, constitutes a kind of refrain. “Todo canto é um buraco,” (everywhere is the same) Luziane’s friend says.

When Bianca, another of the characters, and a close friend of Madalena, decides to move away with her partner her friends tell her she’s crazy. It’ll be hard enough to find another job as a trans woman, they say, and besides, “he’ll only stick around until he finds another trans or cis-woman.” This might be another imperative to settle with the world that is, rather than imagine others which might be, but it is also an expression of care that already embodies another world.

The friends have borrowed a car and left the city for the afternoon to visit a swimming hole in one of the tiny forest fragments spared amidst the soy. In the forest, they marvel at butterflies and float in the water (undoubtedly contaminated with agricultural runoff). The brief idyll, however, inhabits another space altogether, one they themselves produce. Here, the trio of friends performs what it might mean to care, not for the normative spaces legislated as “Nature,” but for the fragile and damaged places we inhabit, always possibly different, and always accompanied by other worlds.

Chris N. Lesser is a doctoral candidate in Geography and Earth and Ocean Sciences at The University of California, Berkeley and the Universidade Federal Fluminense, in Rio de Janeiro.