Afro-Puerto Rican women on the frontlines of climate justice struggles have the knowledge and practices to build a more sustainable future for all. 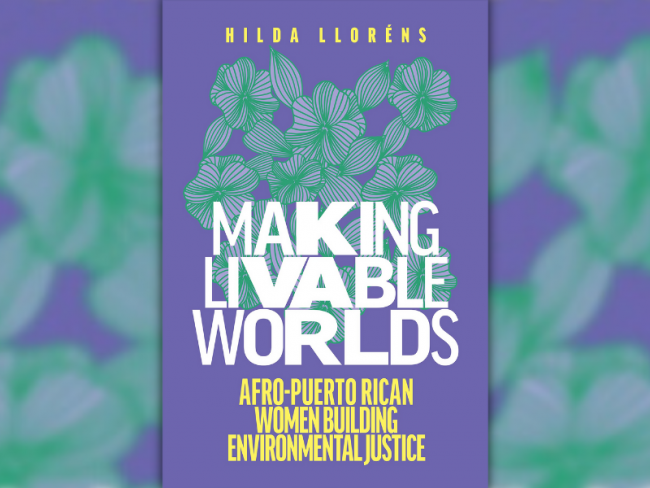 When Afro-Puerto Rican anthropologist-activist Hilda Lloréns first met Milagros, a Black woman in her 50s, she was standing on the roof of her home in Puerto Rico fixing her TV antenna. Two months after Hurricanes Irma and María tore through the archipelago, Lloréns was researching how communities were coping. Milagros, who had single-handedly built her off-grid home and installed solar panels years prior, seemed undeterred by the devastating damage, determined to rebuild “piece by piece” what she called her “refuge.”

Milagros is one of many such figures featured in Lloréns’s Making Livable Worlds: Afro-Puerto Rican Women Building Environmental Justice. With memories and stories at the forefront, the book is a magisterial contribution to the discipline of anthropology in multiple ways. Most importantly, it is a political project that makes visible the leading role Black women from southeastern Puerto Rico have played in advancing demands for environmental, climatic, and racial justice while incorporating the intersections of gender, class, and race. With a decolonial perspective, Lloréns works to “theorize how the state's sociopolitical and cultural construction as patriarch, together with conceptions of the colonized motherland, contributes to the historical marginalization of Black women's lives, knowledge(s), and sociopolitical, ecological, and environmental contributions, as it supports the continued extraction and degradation of the feminized territory.”

Lloréns’s work stands out for the thoroughness with which she exposes, develops, and sustains her arguments, enriching the dialogue between her research and that of her peers with a vigorous list of references. In Making Livable Worlds, Lloréns uses autoethnography and decolonized and ecofeminist ethnography to detail how, against the backdrop of Puerto Rico’s colonial history, women racialized as Black and stigmatized as impoverished have contributed to the fight against ecocidal systems in and outside the territory. Through specific examples and concrete narratives of the people interviewed, the book exhibits community leaders’ ecofeminist struggles. Their life stories stand as a testament to the racism and environmental pollution caused by foreign companies with the endorsement of the insular government—an issue that extends far beyond the communities where Lloréns works.

Among the countless successes of this book is Lloréns’s commitment to a decolonized ethnographic approach that “seeks to center our ‘informants’’ knowledge, experiences, insights, and observations alongside our own.” She seeks to fill a gap in the environmental justice literature on Puerto Rico that has largely overlooked “women’s significant leadership and activism.” As she explains: “In centering antihegemonic narratives of Black womanhood, family, and kinship, my goal is to undermine, upend, and contribute to the destruction of existing racist, sexist, colonial, masculinist, and Eurocentric narratives about the lives of Afro-Puerto Rican women.”

One valuable contribution that Making Livable Worlds makes to activist, Afro-ecofeminist, and decolonial anthropological work is the theorization of the concept of matriarchal dispossession. As Lloréns writes, the term captures the forces of “dispossessive racialization at work against Black women from enslavement through the present.” Throughout the book, Lloréns uses narrative and ethnography to demonstrate how “Afro-Puerto Rican women exercise their agency by crafting life-affirming strategies that resist long-term oppressive systems.” Despite the devastation of the 2017 hurricane season and earlier financial collapse, “Afro-Puerto Rican women on the archipelago and in the diaspora did what they had done for generations: they continued to work at making livable worlds.” Importantly, in deploying “improvisations,” strategies, and solidarities, the women whose lives Making Livable Worlds documents “are neither heroic resisters nor passive victims of the systemic and structural oppression that constrains them,” Lloréns notes.

In addition to collecting the active memories of what the victims of Hurricane María survived and uplifting the stories and situations of southeast Puerto Rico, Lloréns positions herself in these academically unacknowledged areas. She confesses to grappling with ethical questions about “the right (and privilege) to tell others’ stories.” In her poetic epigraph to Chapter 2, she expresses with honesty and vulnerability how she feels about doing anthropological and political work in a place that, on occasion, ignores her as part of it:

why do I care so deeply for a place that doesn’t care for me?
silenced.
ejected.
erased.
and still, i say:
“i am from that place.
i love that place.”
ancestor worship.
earth. sky. plants. air. clouds. rain. rocks. water: salt & fresh.
its animals, my kin.
“how could i not love the only place i can say i am from?
i know no other earth to be from.”

These reflections are key and lead us to think of two scenarios: that of the person who carries out research work in their country, but does not live there and does the unspeakable to maintain community ties even if their origin, interests, and commitments are questioned or doubted; and, in contrast, that of the person who commits anthropophagy by using participants time, knowledge, and information and abandoning the field without sharing the results of the research with them. In addition to uncovering “layers of [her] own emotional complications,” Lloréns commits to ethnographic practices that she says “take a step toward decolonizing and undisciplining [herself] and [her] ethnography.”

Offering a model of political activism, throughout the entire text, Lloréns maintains her criticism of the discipline of anthropology, the government of the colony of Puerto Rico, and the discourse of resilience that seeks to evade state responsibility. She highlights two key findings of her research. First, that “not everyone in the Puerto Rican archipelago or in the diaspora values ​​or wants the same kind of life.” And second, that the women she interviewed “have long been aware that the state is not a benevolent entity invested in safeguarding and ensuring the well-being and rights of its citizenry.” Lloréns breaks with the idea of homogenizing the experience of Puerto Ricanness and adds other bodies, typically silenced, to the struggles for injustices that survive in Puerto Rico.

Lloréns's work is a reflection of her Afro-healing processes and her efforts to seek Afro-reparations for her mother, her ancestors, her peers, and for herself. It is a personal and community exercise of sharing emotions, affections, and solidarity. Beyond narratives that reduce Afro-Puerto Rican women to “victims” or “heroes,” she acknowledges: “Theirs/ours/mine is also a story of survival and perseverance.” She adds that her work with women in southeast Puerto Rico and the diaspora stems from “my strong desire to account for herstories of women like those of my own family—historically devalued, silenced, ejected, and erased.”

The book is an x-ray of a part of Puerto Rico. But its insights can be extrapolated to other parts of the archipelago because it also gives attention to other issues rooted in colonialism, such as neoliberal austerity, population expulsion, environmental injustice, ecocide, the cycle of poverty, school closures, the precariousness of Black people’s health, and the importance of the #BlackLivesMatter movement. In addition, her voice, positions, ethical questions, vulnerability, and reflections speak to experiences that can well be shared by other academic-activists racialized as non-white who similarly face racism in academic structures.

Making Livable Worlds is an example of decolonial, antiracist, Afro-ecofeminist, and emancipatory anthropology. Through documenting the stories of women who often serve as “vital environmental observers and protectors,” Lloréns puts her own identity as an ecofeminist into practice. She lays the groundwork for deep reflection on humanized anthropological work, accountability, and the emotional implications for academic-activists who in turn embody otherness. This eco- and Afro-feminist anthropology-activism also exposes concrete solutions: “Black Puerto Rican ecological knowledge and practices,” Lloréns writes, “could help the archipelago become a more ecologically sustainable place for all.” After all, as she concludes, Black Puerto Ricans, especially women, “have been stewarding the ancestral land and sea and passing down cultural lifeways and fugitive practices for generations, bringing them along wherever they go in the archipelago and in the diaspora.”

After reading this important and revealing book of visibility and denunciation, a question resonates persistently: how can Black women from communities in the southeast of Puerto Rico access and use this academic work to advance their struggles and demand solutions and public policies from the state? “Ecologically,” Lloréns writes, “planning for a sustainable future might save the territory from additional economic, political, and environmental harm.” How do we ensure communities have the tools to achieve this? Without a doubt, this text should be translated into Spanish and distributed among Afro-eco-environmental activists and Puerto Rico’s political class; Lloréns's community work and activism deserve wide recognition.

Bárbara I. Abadía-Rexach is Assistant Professor of Afrolatinidades at the Latina/o Studies Department in San Francisco State University. She is the author of Musicalizando la raza: La racialización en Puerto Rico a través de la música (Ediciones Puerto, 2012). Abadía-Rexach is a member of the Black Latinas Know Collective and Colectivo Ilé, and she produces and moderates the radio program NEGRAS.