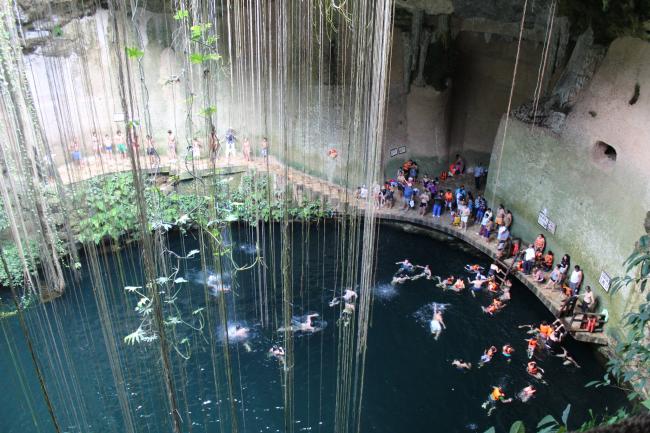 “The jungle is a sacred living being,” the Maya spokesman began, describing how the ecosystem sustains the physical and spiritual life of the Maya of Hopelchén in southern Mexico. Though it contains a multitude of species, they see the forest as a single body, one being plundered by outside interests. By similar logic, the speaker hesitated to be named, preferring rather to identify in the collective.

“The jungle is Yúum K’áax,” he continued, with a deferential nod to the elders who continue to teach him. “Not ‘the god of the forest,’ but Lord Forest. That is to say the jungle is alive.”

Honoring the personhood and lordship of their host biome, members of the Ka’ Kuxtal Much Meyaj coalition are raising the alarm about threats to the jungle’s—and their own—wellbeing.

Though Indigenous people compose less than 5 percent of the world’s population, they care for a quarter of its land, including the habitat for about 80 percent of global biodiversity. Ka’ Kuxtal says the use of agrochemicals in their territory is contaminating groundwater and killing the native bees and plants that nourish the people’s common life. Industrial farming operations “poison the veins of Mother Earth,” the group says. They lament the desecration of area cenotes, the sinkholes and ceremonial sites that provide access to the aquifer.

The Maya campesino organization based in Campeche, Mexico, sees agroindustry within a juggernaut of colonial development projects. Under the auspices of the Maya Train regional development plan, public and private investors are coordinating a dramatic expansion of tourism, energy, and agricultural sectors in the Yucatán. President López Obrador campaigned on the flagship domestic development project in 2018 that forms the backbone of the Southeastern Regional Planning Agenda his government announced with regional leaders in late 2020. Indigenous groups object that these plans—including the expansion of the Riviera Maya, pipelines, solar and wind farms, in addition to industrial crop and livestock farming—were developed without their free, prior, and informed consent and threaten the region’s delicate ecosystems.

The ongoing damage has led Ka’ Kuxtal’s 16-community assembly to support structural reforms they hope will lead to harm reduction. Together with international allies, they are campaigning for supply chain accountability legislation currently under consideration in the European Union and in various several European national legislatures. The legislation would give them legal recourse against companies like Bayer, whose agrochemicals and genetically-modified seeds are contaminating groundwater and ancient corn varieties in southern Mexico. They hope the United States will also enact similar laws.

This pattern of dispossession continues the tradition of the first European colonizers. More than 400 years ago, Bishop of Yucatán Diego de Landa earned a reputation for his single-minded crusade against Maya people and their material religious culture. Empowered by mandates from church authorities to “lead the peoples… to embrace the Christian religion,” Landa and his contemporaries pioneered the ecclesial and legal precedent now known as the “Doctrine of Discovery.”

European evangelical and expansionist fervor metastasized in tandem with anxiety concerning idolatry. Animism, described by anthropologist Philippe Descola as “the attribution by humans to nonhumans of an interiority identical to their own,” has a long legacy in the scriptures and throughout Christian history. Nonetheless, Landa and his contemporaries were relentless in policing the Maya and their religious practices. Though his techniques were considered extreme even at the time, Landa was acquitted for torture by the Spanish crown and remained unrepentant of the inquisition, which included the destruction of virtually all Mayan books.

“They contained but superstition and the lies of the devil, so we burned them all,” he recalled from Spain.

In contrast to Landa, Dominican friar Bartolomé de las Casas denounced the violence, capital investment, and theological justifications that powered Spain’s colonial project. Both men defended the Christian empire’s right to the lands they explored, but, after many years in Maya territory and across Spanish-occupied lands, Las Casas challenged the alliance of state and venture capital while speaking in Valladolid in 1551.

He argued that “the tyrants who offered to raise armies and make conquests have been allowed to go there at their own expense” and bore significant responsibility for genocide in the Americas. “They met their expenses not with money from the properties they had here in Spain, but with what they plundered there.”

The crown-appointed “Protector of the Indians” contended that, alongside Europeans’ failure to recognize the personhood of the Indigenous people they encountered, the economic incentives driving imperial expansion were a principal cause of the destruction and genocide occurring there.

Rather than seeking paternalistic defenders in the style of Las Casas, Ka’ Kuxtal and other Indigenous organizations are leading their own campaigns. They invite diverse allies to recognize, respect, and defend the world’s inherent dignity and to call for tighter rein on corporate interests. The Maya campesino organization is just one group working to revive their common life by promoting seed keeping and medicinal plant knowledge. The Maya group is building local, regional, and international alliances in response to the scope and gravity of the threats they face. Their partners include a number of groups on the peninsula, a team of international legal consultants, and a Mennonite coalition committed to dismantling the Doctrine of Discovery.

“We Mayas are in a struggle to remedy and prevent further damage to Mother Earth,” the coalition spokesman said. An economy that depends on indifference to human and environmental rights cannot be just, argues the coalition. Neither can it last.

Holding corporations liable for environmental and social harms in their supply chains is one step in what Ka’ Kuxtal sees as a larger, urgent turning. Their appeal goes beyond humanitarian benevolence. History remembers Las Casas as an early advocate of what we now call universal human rights for his moral and theological defense of Indigenous peoples in the Americas. Their descendants call on people of good will to honor a similar idea of personhood in the more-than-human world.

For the Maya coalition, this advocacy is inseparable from celebration and thanksgiving. In preparation for the planting season, 30 communities from across the Yucatán gathered in mid-May for the annual Feast of Seeds.

“We celebrate that we have seeds,” said Álvaro Mena. The assembly member described the many varieties of corn, beans, squash, and herbs that the attendees offered in gratitude for what was yet to come. The ceremony blended rituals to honor forebears and posterity while discussing and celebrating current collective actions in the struggle for sovereignty. Of course, there was dancing.

“Seeds are the source of our community, our life,” Mena said. “They give us strength to celebrate.”

Lars Åkerson is an interpreter, educator, and member of the Dismantling the Doctrine of Discovery Coalition.