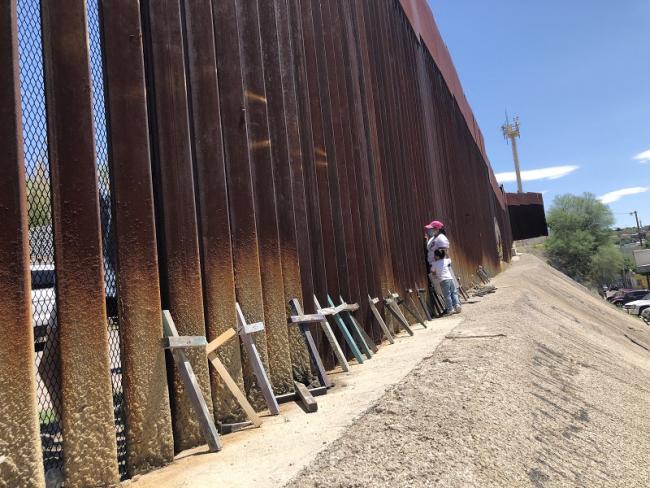 Maria Cristina’s husband Ángel disappeared in June 2018, along with three other construction workers on the way to a job in Guerrero when they unwittingly passed through a “cartel-controlled” town.

Unlike many families of the disappeared or murdered who are too fearful to report the crimes to authorities, Maria Cristina, whose name has been changed to protect her identity, pushed for a formal investigation. But the death threats were immediate. The 30-year-old mother fled the state of Morelos with her 12 and 14-year-old children after repeated threats to kill the family.

Since before the election, the Biden administration has promised to “restore humanity and American values to our immigration system” and to “address the root causes of migration.” Immigration advocates and asylum-seekers responded to these announcements with mixed hope, relief, and skepticism. But for the highly vulnerable population of Mexican asylum-seekers, the Biden administration’s resounding silence regarding their plight does not bode well.

Over the last year and a half, our binational research team has documented hundreds of hours of testimonials from displaced Mexican women, children, men, and families who fled horrific violence in their home communities. They are the invisible refugees, a group that has historically been excluded from the U.S. asylum system and rarely featured in the media or even academic research.

The United States has generally denied the existence of Mexican asylum-seekers despite U.S. State Department travel warnings and rising indicators of violence, forced displacement, and disappearances in Mexico. We have heard stories from Mexican asylum-seekers who lost loved ones, land, property, and all personal belongings. Each of their stories is a unique, compelling narrative of desperately seeking to escape death threats, extortion, kidnapping, torture, femicide, juvenicidio (targeted murders of youth), land dispossession, domestic violence, ethnic and gender-based persecution, forced recruitment into organized crime, and cartel violence. 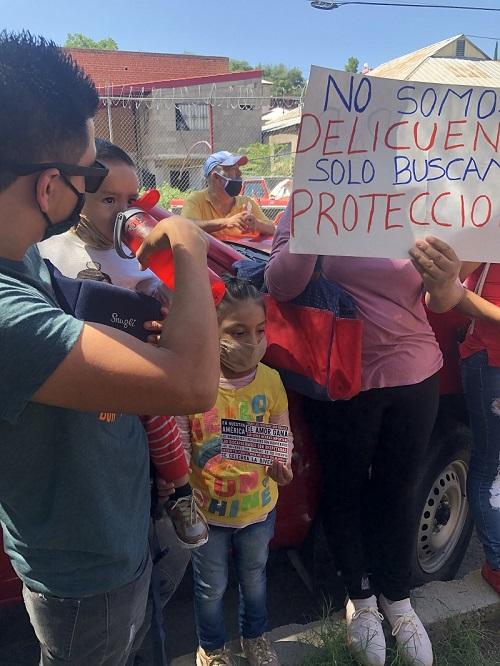 Leaving home becomes the only option when government authorities are believed to be corrupt, fearful of organized crime retributions, or simply apathetic and ineffective. Or worse, as in Maria Cristina’s case, working in tandem with cartels. After going to the authorities, she was devastated to learn that a new police commander, the only one who vowed to help find her husband, had been viciously murdered. All local records of the report and investigation also disappeared.

Maria Cristina detailed frustrating attempts to navigate inept and corrupt government institutions. The agency charged with investigating kidnapping and extortion cases erased the cell phone containing evidence of threats she had submitted to them. This included grisly photos of dismembered bodies sent by her tormentors. After fleeing to a new town, the day after filing a change of address for her national ID–required to enroll her children in school–the cartel found her.

A man wielding a gun showed up at her home threatening “What wasn’t clear to you about leaving the investigation alone? Do you want to happen to you the same that happened to them? You are very young to die, and you have two very beautiful children . . . and with them your whole family will be gone. You have been warned.”

Maria Cristina and the children left for the border that day, hoping to request asylum and accept an offer of assistance from a family member in Chicago.

Even before the pandemic, thousands of Mexican asylum-seekers like Maria Cristina and her children have lived in a protracted state of limbo. They are forced to hide anonymously in shelters and remain in a country that fails to protect them, and where officials actively collude with the cartels that they are desperately fleeing. Draconian Trump administration policies such as “metering,” and the Migrant Protection Protocols (MPP) designed to force non-Mexicans to “Remain in Mexico,” unlawfully blocked Mexicans from seeking asylum in the U.S.

In response to these “orchestrated bottlenecks” (Human Rights Watch) in an egregious violation of U.S. and international refugee law, Mexican authorities and U.S. border agents cooperated in funneling would-be Mexican asylum-seekers onto informal “waiting lists,” along with thousands of MMP enrollees and other deportees. According to the Strauss Center for Security and Law, this patchwork of informal waiting lists, managed haphazardly by Mexican municipalities, humanitarian organizations, and migrants themselves in over 14 cities, grew to approximately 26,000 people by August 2019. Over half (52 percent) of those on the lists were Mexican nationals.

These lists have no juridical foundation, and their maintenance has been riddled with allegations of corruption and extortion. Among the many study participants who experienced this corruption was Demetria, a member of the Amuzgo Indigenous group. She fled her home in highland Guerrero with her three children due to persistent extortion, assassinations of family members, and death threats. Still living in a shelter nearly a year and a half after arriving to the border community, Demetria was dismayed to learn that an acquaintance who was behind her on the list made it across the border by paying Mexican police $1,500 for herself and $3,000 for her child. The friend explained “the police have contact with [the municipal list administrator] and they can change the numbers so those who pay go next when border patrol calls with openings.” 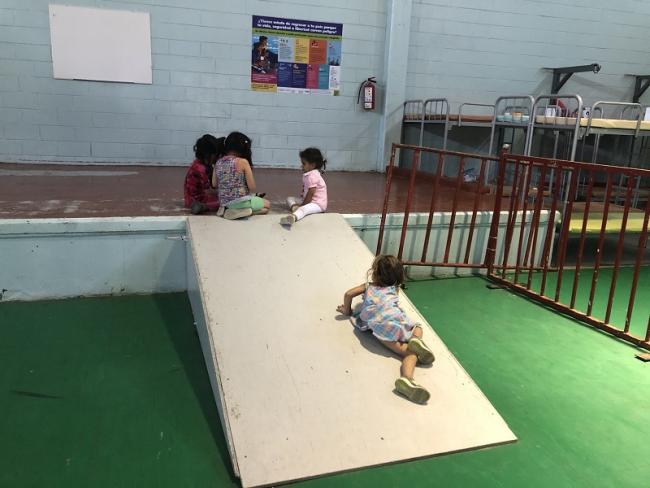 Both Demetria and Maria Cristina have lived in a private Mexican shelter along the Sonora-Arizona border for over a year, dating back before the pandemic. As with nearly all asylum-seekers we interviewed, they could instantly rattle off their numbers on the infamous waiting list: “3,807” and “4,499!”

Maria Cristina recalled Mexican Municipal Police preventing her from reaching the U.S. port of entry on foot to request asylum from U.S. CBP (Customs and Border Protection) officials. She explained to the police, “I have come to seek asylum. My life and those of my children are in danger. I am fleeing my country and town of origin.” In response they erroneously told her she was not permitted to pass to the port of entry, and asylum-seekers must acquire a number on a waiting list run by the municipality. When the family attempted again to cross, the Mexican police threatened, “Señora, understand you need to wait, or we are going to arrest you and send your kids to DIF (Mexican Child Protective Services equivalent).”

Other interviewees had similar stories of Mexican police using misinformation, intimidation, and threats to stop asylum-seekers from even approaching the U.S. border. In the rare instances when some did reach the U.S. port of entry, CBP officers lied to them and insisted they could not request asylum and needed to add their names to a waiting list in Mexico. In most cases, people did not know or feel empowered to question the officials or the humanitarian organizations that channeled them onto the waiting lists.

One of the reasons Mexican refugees are erased in the U.S. asylum system is the uncomfortable and inconvenient political truths that recognizing them would pose for U.S.-Mexico relations. Acknowledging the existence of Mexican refugees would jeopardize binational security agreements.

A South Texas immigration attorney candidly explains: “When you grant asylum to somebody, you're saying that their country can't protect them. And we don't want to pee in the cornflakes of our neighbor to the south. Mexico has always had a traditionally low approval or grant rate for asylum, but now it's just in the toilet.” The chances of asylum are so low for the few Mexicans who make it to U.S. immigration court, that she tells them even before knowing the facts of their case, “There's no way you're going to win your case. You're going to lose your case.”

The Biden administration has overlooked this vulnerable population. They are not mentioned once in the 353 page comprehensive immigration bill sent to Congress or any executive orders to date. Recently, the administration announced they will start processing asylum claims exclusively from Migrant Protection Protocols (MPP) registrants (non-Mexicans), while emphasizing that all others “will be immediately expelled.” These actions point to a continued erasure through complete denial of the existence of Mexican refugees. 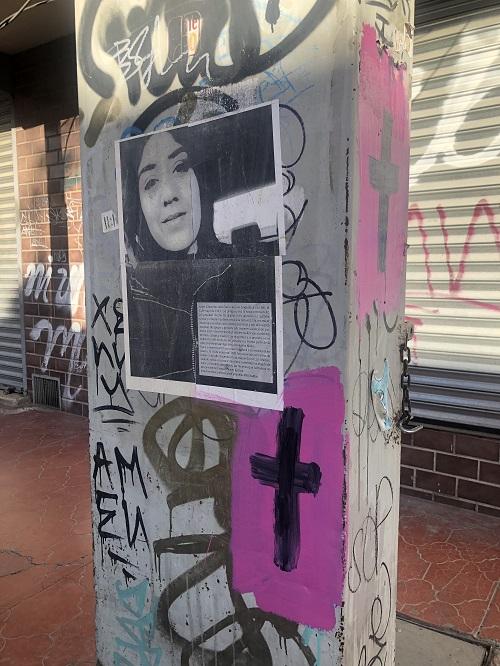 This is neither humane, nor does it “replace the cruelty of the past administration,” as Secretary of Homeland Security Alejandro Mayorkas recently promised. Rather, it suggests the continuation of longstanding U.S. violent policies and practices of invisiblization and human rights abuses inflicted on Mexican refugees, which harkens back to the Obama-Biden administration. Turning a blind eye to the extraordinary violence, corruption, internal forced displacement, and criminal impunity in Mexico will never stem the tide of asylum-seekers or result in a safe U.S.-Mexico border.

These gaps in U.S. immigration policy effectively allow the United States to continue outsourcing immigration enforcement to the Mexican government, especially detaining Central American asylum-seekers before they can reach the U.S. border. To justify this cooperation, both nations must keep up the façade of Mexico as a “safe third country” with a properly resourced, viable asylum system. Finally, recognizing the existence of Mexican refugees feeds the far-right conservative narrative of opening the “flood gates” to a group that has historically been vilified, racialized, and discriminated against in the United States.

Mexico is beginning a process of reckoning, acknowledging nearly 72,000 forcibly disappeared people since 2006, and passing a new law to protect the growing population of internal forcibly displaced people. The exclusion of thousands of refugees from the United States based on their nationality is the opposite of humane; it renders Mexicans less than human. Erasure will not address root causes of forced displacement, nor will it slow migration or lead to a safe and secure border with Mexico. Only by recognizing the existence of Mexican refugees, and their rights to asylum, is it possible to develop solutions to the root problems driving people from their homes in search of safety.

Rebecca Maria Torres is associate professor in the Department of Geography & the Environment and associate of the Teresa Lozano Long Institute of Latin American Studies (LLILAS) at the University of Texas at Austin (UT). Her areas of research include (Im)migration, Displacement & Forced Migration, Children/Youth Geographies, Feminist Geography, and Activist/Community Engaged Scholarship.

Valentina Glockner is full time professor and researcher at Departamento de Investigación Educativa at CINVESTAV, Mexico. She specializes in the anthropology of childhood/youth and (im)migration, the anthropology of the State and forced displacement.

Amy Thompson is a post-doctoral scholar with the Geographies of Displacement project. Her research investigates the expression of agency in migrant children and youth and the unequal treatment of Mexican nationals under United States policy and practice.

Gabriela García is full time professor and researcher at El Colegio de Sonora, Mexico. She specializes in the anthropology of religion and religious beliefs, gender issues and childhood studies.

Caroline Faria is associate professor in the Department of Geography and the Environment and director of the Feminist Geography Research Collective at the University of Texas at Austin. Her research uses feminist and antiracist geographic approaches to examine the links between neoliberal globalization and urban development and dispossession.

Acknowledgments: This binational research project “Geographies of Displacement: Mexican Migrant/Refugee Children and Youth in the Mexico-United States Borderlands,” is supported by grants from the ConTex Collaborative Research Program (a join initiative of The University of Texas System and Mexico’s Nacional Council of Science and Technology [Conacyt]) and from the U.S. National Science Foundation (NSF) Human-Environment and Geographical Sciences Program (HEGS) (Award #1951772). We also are grateful for support provided by the Teresa Lozano Long Institute for Latin American Studies (LLILAS) at the University of Texas at Austin and the Observatorio de Investigación con las Infancias (ODIIN) at the Colegio de Sonora (Colson).

Thank you to the Los Angeles Times en Español for permitting us to include selected material in this article from a previously published Op-Ed.