Mexico is on track to eliminate the use of Glysophate by 2024, but still authorizes pesticides, including Paraquat and Dicamba, that are banned in other countries. 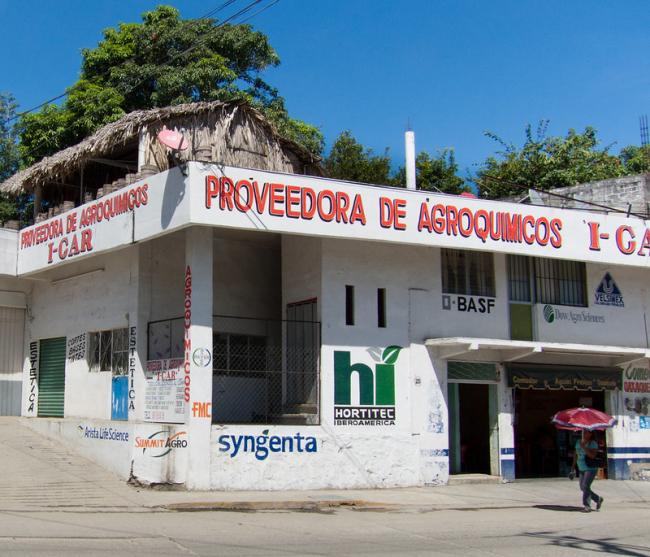 Mexico still authorizes more than 3,000 insecticides, herbicides, and fungicides for agricultural, forestry, domestic, gardening, urban, and industrial uses. Among them are at least 183 active substances classified as highly dangerous in international agreements, and 111 which are prohibited in other countries, according to government records and recent reports.

Fernando Bejarano, coordinator of the Pesticides and Alternatives Action Network in Mexico (RAPAM), speaks positively of the December 31 presidential decree to ban Glysophate in public institutions and work toward its elimination in the private sector. But he questions the governmental mechanisms in place to address the agrochemicals situation in Mexico.

“The current government is negotiating the voluntary cancellation of generic registrations. These are molecules that no longer have much commercial interest for industry. A molecule can be associated with multiple permits. They do not dare come out against the molecules that are in active use. The process is very slow,” he says.

Bejarano also says that internal disputes in the government of Andrés Manuel López Obrador, known popularly as AMLO, between agroecology and agro-business also play a role.

“It’s an open debate because there is not a single entity that directs policy. There are contradictory interests between the weight of agro-industry and the weakness of the epidemiological surveillance system,” he says, which monitors the health impacts of these substances.

The Federal Commission for the Prevention of Health Risks (Cofepris) evaluates the substances and authorizes their use in Mexico, but the Agriculture and Rural Development Secretariat (Sader) is involved in the design of agricultural policies that influence the use of agrochemicals.

The prohibition of Glysophate, the best-selling and the most well-known agrochemical in the world, was the source of disagreements within the government, reflecting internal differences. The Secretary of Sader, Victor Villalobos—a defender of biotechnology—presented two drafts of decrees that would have contradicted López Obrador’s promise to ban the substance.

Last September, the Secretary of the Environment, Victor Manuel Toledo, resigned his post after a journalist revealed an audio recording of him questioning the government and describing internal disputes and conflict of interest, especially around Glysophate.

The departure of Alfonso Romo from the President’s Office in December paved the way for Glysophate to be banned, considering that since 2105 the International Agency for Research on Cancer of the World Health Organization (WHO) has considered it a “likely carcinogen in humans.”

The 2017 report “Highly Dangerous Pesticides in Mexico” (Los plaguicidas altamente peligrosos en México), compiled by nine non-governmental organizations, says that its application is typically in fields of export crops and in parcels of small-scale campesinos and Indigenous farmers.

With the prohibition of Glysophate, AMLO curries favor with environmentalists, especially those within his administration. And while the decision pits him against agro-industry, he leaves dozens of other pesticides permits intact. Between 2021 and 2026, dozens of permits will expire, and the government strategy aims to let these deadlines run out, after which the substances will leave circulation.

It includes 2,4-D, a toxic herbicide banned in Belize, Denmark, Norway, and Sweden, and restricted circulation in the European Union (EU). There are 194 valid permits, 10 expired permits, and seven canceled permits for 2,4-D, according to Cofepris' Registry of Pesticide, Fertilizers and Toxic Substances.

Mexico also authorizes the use of Atrazine, with 135 existing permits, five expired permits, and nine cancelled permits. Atrazine is banned in a dozen countries.

Also on the list is Chlorpyrifos, a substance that can cause low birth weights, autism, and memory loss. There are 207 existing permits, one of unspecified length, 24 expired permits, and seven cancelled permits. In February 2020, a U.S. company, Corteva, announced it would no longer produce Chlorpyrifos, while other companies continue to manufacture it.

Dicamba, the candidate to substitute Glyphosate, particularly in GMO crops, has 40 existing permits, two cancelled permits, and one expired permit. In the United States, an appeals court blocked the sale of Dicamba in June 2020, but in defiance of this ruling, in October, the Environmental Protection Agency announced that it would authorize its use. The herbicide is a suspected carcinogen. The newly inaugurated president Joe Biden’s administration is left to resolve the issue.

Mexico also allows the commercialization of Methyl Parathion, an insecticide banned in Denmark and Peru and which the Rotterdam Convention classifies at “extremely toxic.” There are 144 existing permits and 35 cancelled permits for its use in Mexico.

Another favorite in the Mexican market is Paraquat, whose toxicity has been known for years. Nonetheless there are still 78 active permits, seven expired permits, three cancelled permits, and two of unspecified time periods in Mexico.

Among the most toxic substances is Sulfluramid, which is banned in the United States and the European Union and has seven active permits in Mexico.

Of the new generation substances, there is Isoxaflutole, with six valid permits, one expired, and one canceled.

In addition, 206 neonicotinoid formulations are circulating in the Mexican countryside, which the scientific community has found to cause the death of bees. The Mexican authorities have canceled six authorizations, while 38 have expired, and three have an unspecified validity.

Since 2007, pesticide consumption in Mexico has remained stable. In 2018, 53,000 tons were used, mostly herbicides, insecticides, and fungicides. This places Mexico behind Brazil and Argentina, the largest users in Latin America, according to statistics from the United Nations Food and Agriculture Organization.

Despite this consumption of pesticides, Mexico reports a moderate amount of unintentional poisoning. Between 2011 and 2015, 573 cases were registered, of which 91 were minors and 40 were farmers, according to WHO data. However, that is the second highest figure in Latin America, behind Guatemala–687– and more than double that of Brazil– 236–although experts point out that there could be many unreported poisonings.

In January 2019, National Commission of Rights Humans (CNDH) determined in a recommendation of non-mandatory compliance addressed to the Secretariats of the Environment (Semarnat), Sader, Cofepris, and the National Service of Health, Safety and Food Quality that the failure of the federal authorities to adopt normative, administrative, and public policy actions to properly regulate highly dangerous pesticides violates the rights to food, water, a safe environment, and health.

The AMLO government has adopted ambiguous environmental policies. While Semarnat promotes agroecology, Sader defends agribusiness, including biotechnology, and distributes synthetic fertilizers to small producers in Southern Mexico. María Luisa Albores, who replaced Victor Toledo at Semarnat and previously led the Ministry of Welfare, has maintained that approach. While the environmental faction has won the Glyphosate battle for now, it is possible that the sectors defending agribusiness will continue their campaign in other areas.

In contrast, the government is building megaprojects, such as a refinery in the state of Tabasco, in the southeastern part of the country, and the Mayan Train, which will run through the Mexican southeast and cause severe ecological impacts. In addition, the administration has continued budget cuts to environmental entities in recent years.

To comply with the Stockholm and Rotterdam Conventions, both in force since 2004, and the CNDH's recommendation on the use of pesticides, the Mexican government has already canceled 83 registrations for Endosulfan, 32 for Methyl Parathion, 37 for Azinphos-methyl, 14 for Carbofuran, nine for Chlordane, five for Captafol, six for Methamidophos, as well as four for hexachlorocyclohexane (HCH), three for Phonophos, two for DDT and one for Glyphosate, and three for Methidathion.

In total, the government has already canceled at least 337 agro-toxic products and formula registrations. The Cofepris Register of Pesticides, Fertilizers, and Toxic Substances lists some 280 companies that manufacture the molecules.

The fight against biocides is linked to the fulfillment of the Sustainable Development Goals by 2030, specifically the reduction of the number of deaths and illnesses caused by dangerous chemical products, water, air, and soil pollution, water quality, and environmentally sound waste management.

Omar Arellano-Aguilar, professor at the Faculty of Sciences of the National Autonomous University of Mexico, says that Mexico requires a transition plan, in which “you have to resort to national technology and international experiences, so that they do not generate more problems in addition to the existing ones.”

He says that "a lot of will is needed from the national chemical and agricultural industry."

But Semarnat has not updated its implementation plans for the Stockholm and Rotterdam Conventions, nor did Mexico meet the voluntary 2020 goal of the Strategic Approach to International Chemicals Management (SAICM), to achieve the rational management of chemical products to minimize effects on human health and the environment.

Bejarano points out that in Mexico the true volume of pesticides used, and where and how they are applied, is unknown.

“The analysis of the regulation must be deepened. If companies don't use existing permits, they should voluntarily cancel them. What do they have them for? We are talking about changing a paradigm and not about good practices. There is still a lot to do to guarantee the right to clean and sustainable production," he says.

Arellano-Aguilar suggests reviewing the national implementation plan for the Stockholm Convention and promoting alternatives such as green chemistry, agroecological practices, and biological variants.

“We need to discourage the irrational use of these formulas. Permits need to be reviewed. Unfortunately, the gray agenda (the prevention and fight against environmental pollution) is one of the least executed in Mexico,” he says.

Emilio Godoy is an investigative journalist. Based in Mexico, he writes about the environment, sustainable development, and the climate crisis. His articles have been published in Mexico, Central America, the United States, Belgium, and Spain, and have been cited in books and specialized magazines. In 2012, he won the Journalism Award for Green Economy and Sustainable Development, and in 2017 the In-Depth Report Award for Energy Journalism.