Approaching the one-year mark of the pandemic in Mexico, workers adapt in the absence of state support. 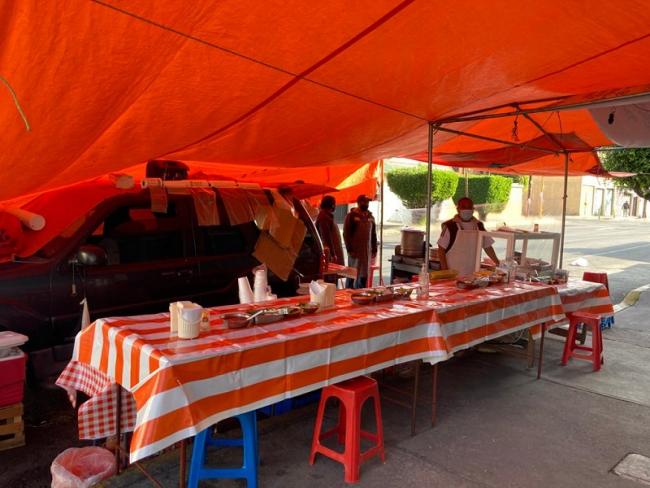 Last November 43-year-old Zosimo Velasco felt the onset of a fever and immediately feared for the worst.

Without health insurance, the Oaxaca native isolated himself in his room in the apartment building in the upscale Condesa neighborhood where he works as a janitor and caretaker. He considered seeking care in a public hospital too risky; by mid-November, Mexico had become the fourth country  to surpass 100,000 deaths from the virus and a surge of cases were decimating healthcare workers. Eventually, Velasco tested negative twice—he had actually contracted influenza—but for six days he was unable to work, almost a week of lost income.

As part of his informal contract, Velasco does not have to pay rent. After finishing his cleaning duties at 2 PM, Velasco turns to other side hustles on the street. On weekdays, he cleaned the apartments of AirBnb guests. Leading up to and during weekends, he would sell gum and cigarettes to clubgoers in the Condesa and Polanco neighborhoods from midnight until the sun came out. The additional income could be substantial. Coronavirus has all but decimated these income-earning opportunities since last March.

“Now I only have my cleaning job,” Velasco says. “There are no foreigners renting out rooms, all the businesses and clubs and restaurants are closed. It was good income then, but the pandemic has really hit us hard.”

As Mexico City transitioned from the strictest tier of lockdowns to a slightly more relaxed state in February, Velasco has relied on running errands to earn money. Tenants pay him to walk their dogs, collect groceries, or deliver certain items.

“Next week, I’m going to start selling Jell-O and tortas on the street, something that workers in the area can afford,” he says. “Está muy mal la situación.” The situation is very bad.

Adapting to a Rapidly Changing Situation

In Latin America, the most unequal region in the world, over half of the economically-active population works in the informal economy. The sector is characterized by small businesses that are typically family enterprises, lack a social safety net, and have low economic output. In Mexico, an estimated 22.6 million people work in informal jobs, a number that swells during economic downturns as people are laid off from formal jobs. The underemployment rate—those looking for extra work but unable to find it—has also increased during the pandemic.

Before the pandemic, informal workers were present on nearly every corner of the city. Informality thrives on large and constant flows of people; the city is known for its markets teeming with vendors who sell anything from souvenirs to electronics to fruits and pirated books. From the Central de Abastos wholesale market to markets in Tepito and Coyoacán, street vendors have established their presence in different areas of the city, though not without occasional friction with local government. However, quarantines and lockdown restrictions dating back to March 2020 have irrevocably changed how street vendors conduct their business.

Blanca Santiago, 27, has sold tamales for the past three years with her husband and mother in Iztapalapa, the city’s most densely populated borough with nearly 2 million residents. The borough has also had the most deaths from the coronavirus. “Nothing has been the same since this started,” Santiago says. “During the ‘Semáforo Rojo’ we could not sell, and the police would be stricter. They would watch the streets and inform us that we could not operate because of the high infection rate.”

They had to bring the small makeshift food stand outside their house indoors. But the shift was difficult; invisibility does not help vendors. Santiago’s sales have plummeted with fewer and fewer workers and professionals walking through the nearby market. The winter festivities, usually a boon for their business, fell far short of expectations. “We work every day, and it is only people who live close to us who buy from us now,” Santiago says.

Santiago and her husband have a young daughter who just started primary school. Since school still has not resumed in-person, Santiago also must spend a significant part of the day with her daughter. This leaves her with little time to look for other sources of income.

In another part of Iztapalapa, Eleuterio Pulido Ramírez sets up his taco stand every Sunday from 5 AM to 1 PM at the same street corner where he has been for 40 years. The bright orange tarp and smell of barbacoa have become his calling card. Another family enterprise, Ramírez and his wife, daughters, and nephew spend several days preparing the goat meat, kilos of salsa, soup, and beverages for their customers. They drive 90 minutes from Capulhuac in the neighboring State of Mexico to sell in Iztapalapa.

Ramírez has weathered various economic crises including the debt crisis of 1982, when he first started his business. But what is happening now is unprecedented, far worse than the 2009 H1N1 swine flu outbreak that originated in Mexico. “This has hit us very hard. People do not buy the same amount. Instead of three or four kilograms of barbacoa, they buy half of that now and also to-go,” said Ramírez. “We make better money when people stay and eat. We can sell them drinks, more tacos, more soup. We cannot do that anymore.”

July and August were particularly punishing. All food vending that was not at an established restaurant was forbidden. For six weeks, Mexico City authorities did not allow street vendors to operate. “It was a critical point, there were no revenues,” Ramírez recalls. “I had neighbors who risked it to work but the police would take their food and produce... it was a lot of time without income and it was ugly for us as vendors and people.” Ramírez chose not to work clandestinely, because the risk of losing his equipment and produce would have been too high.

But Ramírez’s decades in the community have provided him with important social capital. The most loyal customers, who are older and therefore more prone to coronavirus, have asked for their weekly dose of barbacoa through text messages and phone calls.

“I have their food ready to go by the time we get to Mexico City. It has made our trust grow and I have felt that our attention to our customers has really been visible, I know all of their tastes,” Ramírez says. Leaving the community to work elsewhere in the capital city is not an option, because he has become a fixture of the community.

The informal sector in Mexico tends to grow in times of economic shock as formal workers lose their jobs and are forced to look elsewhere for work. Leftist President Andrés Manuel López Obrador (AMLO) is a fiscal conservative and has allocated just above half a percentage point of GDP in stimulus measures. In comparison, Argentina and even Brazil’s right-wing government have allocated 4 percent and 8 percent of GDP, respectively. AMLO has cited concern about debt dependency even as international lenders like the International Monetary Fund (IMF) and the World Bank have encouraged borrowing in this once in a lifetime crisis.

Informal sector jobs, by definition, do not contribute to the state’s coffers. This makes it difficult to redistribute wealth, with an overburdened middle class and elites whose income and property taxes pale in comparison to those in developed countries. Late last year, the IMF suggested raising taxes as part of conditional loans, a politically unsavory recommendation that the Mexican Minister of Finance turned down.

The Mexico City government has introduced programs meant to help informal workers, requiring state-issued identification and confirmed residency in the capital. However, while some of this population relies on government assistance, many say they are not expecting any aid, and in the past have rarely received it. There is little trust in the government and the bureaucratic process can take far too long. If the state does not assist them during the worst economic and health crisis of the last 100 years, then many will simply never expect it in any case. Santiago says that while she heard about interest-free loans, she worried the process would be time-consuming and uncertain.

Fortunately, Santiago’s and Ramírez’s families have not contracted coronavirus. Santiago and her family rely on the public Seguro Popular health insurance (now under the new Institute of Health for Well-being), but they would not resort to the hospital unless the situation was “very grave.”

Ramírez’s other occupation as a public school teacher in his home state grants him health insurance but he would much rather go to a private doctor for any type of attention. “Public hospitals here lack many supplies, and their capacities are bursting,” he says. “I would think twice about going to a public hospital before doing so.”

Velasco, the janitor, has always turned to Farmacias Similares (Similares Pharmacy), known for their affordable medicine, for any concerning health issues. He is unlikely to go to a public hospital, and like Santiago, he will only see a private doctor if he is gravely ill.

The necessity of finding work during the pandemic takes precedent. Velasco’s 83-year-old mother, who lives in Oaxaca, recently fractured her leg. She has signed up for her coronavirus vaccine, but now treatment for her injury has become another financial concern. Velasco is grateful he does not have to pay rent but in what has been a truly difficult year, in which he has lost friends and relatives to the coronavirus. But the situation seems intractable and he has heard his mother’s surgery could cost between 10 and 40,000 pesos ($490-1,950). “I can’t go see her back home… what I can do is work,” Velasco says.

"A Habit that Will Never Leave Us"

As Mexico nears the grim milestone of 200,000 Covid-19 deaths, the situation remains dire. The country has ordered hundreds of thousands of vaccines from Pfizer and Russia, but the vaccination rate is painfully slow. Priority was given to healthcare workers, though many experienced long wait times, and in some rural parts of the country teachers and public workers are being inoculated ahead of others.

Santiago, Ramírez, and Velasco do not have the vaccine in mind; they know it will take months before they are inoculated. Setting up their stands, they wear masks and display hand sanitizers prominently to give potential clients a sense of safety. For Velasco, the janitor in Condesa, and millions of others in his situation, the past year has marked an indelible turning point in their lives.

He knows people might be skeptical to buy food from someone on the street, but what else is there to do? “What we went through during the past year— socially distancing from each other, cleaning ourselves often, wearing masks—it is a habit that will never leave us,” Velasco said.

Humberto J. Rocha is completing his master's degree in Latin American Studies at the University of Oxford. A Mexico City native raised between Monterrey and Houston, he has reported for Forbes, the Stamford Advocate, and The Yomiuri Shimbun focusing on the intersection of politics and culture.