Mexico’s show of force when caravans approach the Southern Border obscures the daily reality of immigration deterrence and enforcement. The police sirens resounded through the streets of Ciudad Hidalgo, Chiapas. Equipped with anti-riot gear, members of the National Guard marched through the streets of this small border town, flanked by agents from the National Migration Institute (INM), prepared to stop the Honduran caravan that began its journey on January 13 from San Pedro Sula. This military paraphernalia was the latest in a long list of actions by the Mexican government to prevent Central American migration to the United States.

The Mexican government’s display of military power in response to the caravan approaching its southern border reaffirmed its aversion to Central American immigration and the Andrés Manuel López Obrador administration’s commitment to U.S. interests.

But it also reveals a more recent trend, the last stage of Mexico’s discourse and practice on immigration: the spectacle of nationalism on social media and advertised heroism of Mexican security forces. This spectacle has the dual objective of reinforcing nationalist sentiments and diverting attention away from less heroic practices, such as the continuous detention and deportation of children and adolescents or racist acts against migrant women.

The coordinated deployment of hundreds of agents from the INM, the National Guard, and the Army served a purpose as propaganda, even if it did not materially impact the movement of migrants through Mexican territory. The images of security forces, posing with swollen chests and hands on hips, invite the Mexican population to feel proud of the defenders of the Homeland. This stands in stark contrast to the progressive immigration reforms López Obrador promised during his campaign and the rhetoric of his administration since December 2018. For decades, the Mexican government has spread a discourse in its immigration policy of human rights at the forefront and detentions, deportations, and militarization behind. Displaying military might on the border is a radical turn from this messaging.

The military paraphernalia deployed to stop the caravan once again fueled nationalism and fantasies of security in the face of foreign threats. Immigration militarization in Mexico is not new. This is not the first time the Mexican government has deployed resources of this type to stop a caravan. But while the media coverage and militarized response to migrant caravans on the border attracts the public eye, the Mexican government’s strategy to stop Central American migration is made up of daily detentions, deportations, and other and equally deplorable acts of deterrence within the territory.

Mexican Immigration Enforcement Beyond the Border

The militarization of Mexico's southern border is the product of a series of restrictive immigration policies. The most recent addition to this list is the Southern Border Program, whose main objective was to stop immigration from Guatemala, Honduras, and El Salvador, especially of unaccompanied minors, to the United States. Since the end of the 1990s, with Operation Sealing of the Border, and the beginning of the 2000s with South Border Plan, restrictive measures including militarization and creation of surveillance and migration management infrastructure have increased.

Detention and deportation work in parallel to militarization and have been the main weapons of immigration policy. Despite decriminalization of immigration in 2008, which at first glance was a radical and substantial change in Mexican immigration policy, arrests and deportations continued. Just in 2020, more than 80,000 people, 90 percent from Honduras, Guatemala, and El Salvador, were detained in Mexico and more than 50,000 were deported. An even more worrying number if we take into account that for much of the year the border between Mexico and Guatemala was closed due to the Covid-19 pandemic.

Detention, deportation, and militarization of the border are the public face of Mexican migration policy, but they are not its only manifestations. Failing to augment the overloaded and saturated asylum system is also a preventive measure for migration. During 2020 there were 41,329 refugee applications, almost 60 percent from Honduras, Guatemala, and El Salvador, but only 28 percent were processed.

These practices, far removed from the spectacular nature of the border, aggressively reduce the resources, hopes, and strategies of migrants. It is an evolutionary step of restrictive immigration policy. The Mexican government takes advantage of the importance of the caravans to divert attention from daily practices within Mexican territory.

"Tomorrow they are Leaving”

Simulation is a fundamental characteristic of Mexican immigration policy, illustrated by the social network presence of the National Migration Institute. Through social media and news coverage, the planning and execution of state actions now has unprecedented diffusion. These visuals align with AMLO's speeches, adorning enforcement actions with well-structured and repetitive phrases about respect for human rights and the humanitarian nature of the immigration policy since his arrival to the presidency. Images of INM officials holding migrant minors in their arms and smiling inside immigration detention centers, often with Black minors, reveal the racist, systemic simulation that seeks to soften the detentions, deportations, and denials of asylum applications.

At the same time, videos with epic music serve as a vehicle for fantasies of war and heroism against foreign invaders. The deployment of INM agents, National Guard, the Army, and technology to defend “the cause” further promotes an idealized version of immigration practices.

As I was visiting Ciudad Hidalgo, taking photographs of the military deployment in the Suchiate River, local people, seeing my camera, came up to me and ironically said that I better take lots of photographs, because this number of INM agents, soldiers, and National Guard members was a rare sight. "Tomorrow they are leaving," they repeated several times. Residents of border towns are accustomed to sporadic media coverage and local opinions on the brevity of the military presence at the river are common. This demonstration of power is one more fragment of the border landscape in southern Mexico. The local population has learned to live with it by pointing out the absurdity of the situation. 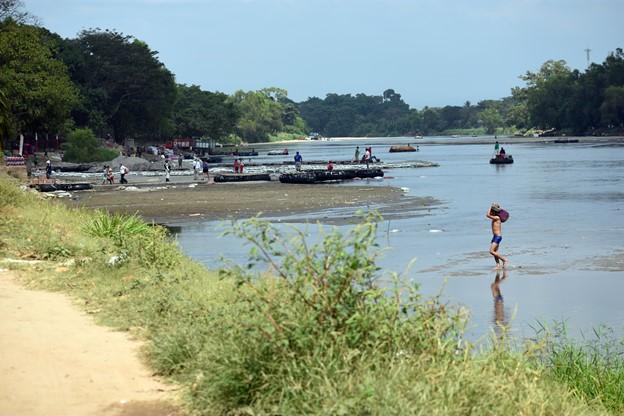 “Everything is a show,” others said as they waited to board a raft to go to the Guatemalan side of the river. It is here where the spectacle and the show are more explicit. While a massive security force is deployed to stop a caravan, the exchange of goods continues flowing freely in the river.

The Mexican government has used the caravans to divert attention from other issues and make other groups and stories invisible. One of these issues that is largely ignored on the immigration policy agenda are the deplorable conditions in various plantations in Southern Mexico (coffee, banana, sugar) that use Central American labor, especially Indigenous families from Guatemala. These historical spaces of labor exploitation have been made invisible and forgotten in the political agenda, overshadowed by the complex and urgent situation of caravans, asylum applications, and humanitarian assistance.

State power and its performative capacity, as well as the enormous media attention that they provoke, are weapons that fulfill a double function in Mexican immigration policy. On the one hand, it reinforces nationalist, xenophobic, and racist sentiments with masculinist symbols of homeland protection with civil and military security forces. At the same time, it diverts media attention, especially in international outlets, towards massive events such as the caravans, which obscures the daily practices of surveillance and punishment along the border and within the country.

As regional migration policies become increasingly restrictive, we must reflect on this transformation in plain sight. Mexico’s decision to make its practices and use of force in immigration policy more public is a decisive turn for the region. As long as the Mexican government continues to take advantage of sporadic, massive events such as caravans to promote its hardline stance against migrants, it will continue to divert attention from pressing, ongoing, issues like the increase in asylum applications in the country, the exploitative conditions in plantations along the border, or preventing and prosecuting  murders such as the one occurred in Camargo, Tamaulipas, where 19 people were found burned in a car, at least 14 Guatemalan migrants among them. As long as the Mexican government continues to build and reinforce the "threat" of migrants arriving from outside, it will remain passive in the face of the crimes committed against them within the territory.

Jorge Choy-Gómez is a Ph.D. student at the UT Austin Institute for Latin American Studies, where he researches bureaucracy, power, and violence in the enforcement of Mexico’s immigration policy.