Molina Lara died on December 17, 2020. He went into exile in the United States after death squads targeted him for union organizing during El Salvador’s civil war. 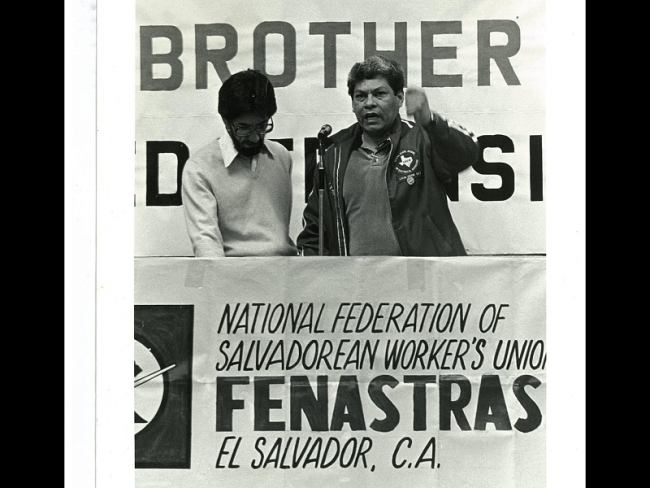 One of the most important union militants in Central American history, Alejandro Molina Lara, died in Los Angeles, California on December 17, 2020. Born in El Carmen, La Unión, El Salvador, on May 20, 1944, Molina Lara quickly rose to prominence in the Salvadoran labor movement while working at a shrimp packing facility in Usulután. He leaves a legacy of militant labor organizing in El Salvador and the United States.

The Salvadoran labor movement was part of a Latin American upsurge in organizing during the 1970s. In El Salvador and beyond, strike movements had to contend with military regimes. In El Salvador, the labor movement developed over two decades under such a regime. By the late 1970s, the unions pushed the regime in a highly repressive direction that, in turn, propelled an expansion of the movement.

Based on the number of strikes and strikers, by 1979, the Salvadoran workers’ movement followed Brazil as the proportionately the most combative in the Americas. The Salvadoran labor movement followed Argentina, Chile, and Uruguay in the early 1970s as the most militant in Latin American history, if one takes the tomas, plant occupations, as a sign of militancy.

Molina Lara was an important union leader at the local and national level. Born into a poor family, he was unable to finish secondary school. At a young age, he learned to be a welder and in 1966 he obtained a job at Mariscos El Salvador, a shrimp packing facility in Puerto El Triunfo, Usulután. Thanks to his militant spirit and courage, within a few years, plant workers elected Alejandro to the leadership of the Sindicato de la Industria Pesquera (Fishing Industry Union, SIP). He helped spur an organizing drive, among young women who worked as peladoras (shrimp peelers) and empacadoras (packers). Most plant employees were women, and thus essential to any serious union mobilization. By 1972, virtually the entire work force of Mariscos belonged to the union. 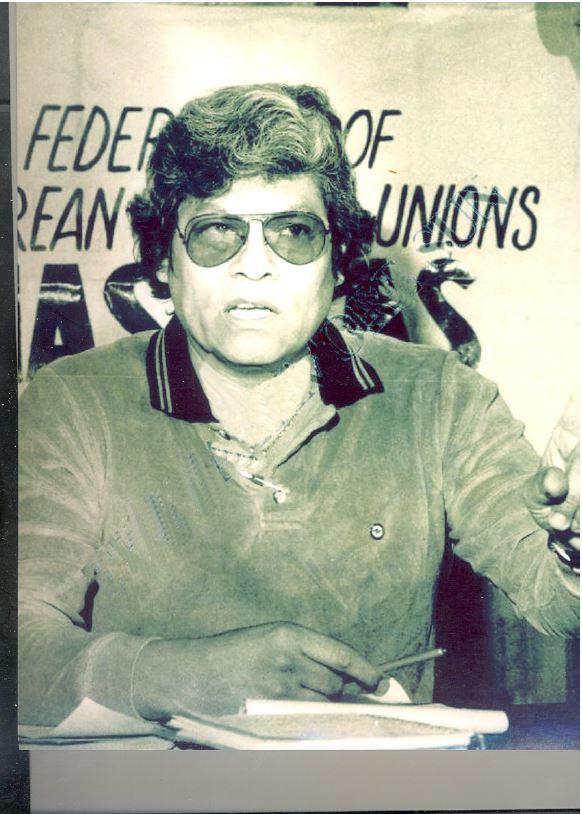 Before its collapse in the 1990s, the shrimp industry was one of the most important sources of foreign exchange for the country. The leading figures of the coffee and cotton industries controlled the shrimp business. In 1974, Molina Lara led the first legal strike in the history of El Salvador. He managed to unify both men and women working at Mariscos in a struggle to compel the business to respect the union contract and its members. Mariscos was owned by Rafael Guirola, a member of one of the four wealthiest families in the country. His family owned 52 coffee plantations worth over 50 million dollars.

Molina Lara navigated the line between direct action and a scrupulous accordance with the Labor Code and the court ruled in favor of the strike’s legality. This gave the strikers a major advantage over Guirola, who was prohibited from employing strike breakers. SIP won the strike compelling the company to rehire fired workers, to pay back wages due to the strike, and to grant benefits such as vacations and scholarships for children of the workers.

In the following years, Molina Lara and the union won victories that especially favored female workers, ranging from a cafeteria to a first aid station. Moreover, in the three shrimp packing plants he helped to open spaces for women to express themselves and take greater control over their lives.

The union’s greatest victory occurred in August 1979 when SIP compelled the companies to award temporary workers, representing over 40 percent of the labor force, the same rights as permanent employees. Molina Lara was elected secretary-general of SIP five times by overwhelming majorities. He became a left-wing labor caudillo. One woman shrimp worker wrote a poem honoring him:

We of Puerto el Triunfo never have lost a strike
We always struggle together
We don’t let the deceitful bosses offend us
Though they try to every day;
Alejandro Molina Lara is our leader
He is a precious pearl that we found in the sea,
All the workers of the fishing industry will die before they do him harm
We won’t allow his noble principles to fail.

While the paean praises Alejandro, his relationship with predominantly female work force was complex. Molina Lara and his male compañeros had to undergo a transformation and reconsider their notions of women and femininity. They had to recognize female militant workers as women and not see them as stereotypes framed in derogatory language. Moreover, they had to begin to treat women as intellectual and moral equals.

In recognition for his achievements in the SIP, the Federación Nacional Sindical de Trabajadores Salvadoreños, (The National Union Federation of Salvadoran Workers, FENASTRAS), the leftist federation, elected him as secretary, the second-highest ranking officer. FENASTRAS had provided decisive acts of solidarity during various strikes in Puerto El Triunfo.

Throughout 1979, popular organizations linked to the revolutionary Left led strikes and occupations in the San Salvador metropolitan area. Molina Lara joined the Frente de Acción Popular Unificada (Unified Popular Action Front, FAPU) which was tied to a guerrilla group. Unlike most leaders of the revolutionary Left, Molina Lara was careful to keep FAPU and other revolutionary militants from getting involved in strictly union matters. He drew a line between union and political action and, at least in Puerto El Triunfo, SIP’s apoliticism was a key to its success and survival. The shrimp workers’ union brought militants of ORDEN, a paramilitary rightist organization, into its leadership group. The ORDEN/SIP leaders, in turn warned their union sisters and brothers about the movements of the Guardia Nacional and death squads.

By 1980, Alejandro became a death squad target. Later in the year, Molina Lara was driving to the Puerto after a family visit in Usulután. As he was leaving the city, two pickups with armed men surged ahead to block his path. He managed to swerve into a gas station and then gunned the engine. The car that FENASTRAS had lent him had a souped-up motor specifically to evade death squads. He was able to elude the pickups and speed past them, outracing them to the port.

Alejandro was arrested on four occasions; the last time was in FENASTRAS headquarters on January 15, 1981. Plainclothes agents barged in, tied him up, and blindfolded him. They put him in a basement cell at the headquarters of the National Police. For six days, Molina Lara was blindfolded, beaten, and given electric shock torture. The interrogators constantly demanded that he turn over names to save his own life and those of his family. He recalled with a mixture of pride and bitterness, “They didn‘t break me.”

After two weeks, the Red Cross managed to get him transferred to the Mariona penitentiary. After six months, he was freed; he went into exile in the U.S. Sponsored by the Committee in Solidarity with the People of El Salvador (CISPES) and progressive unions, Alejandro traveled from the coal mines of West Virginia to the copper mines of Arizona giving impassioned speeches to union members about the labor struggles in El Salvador. 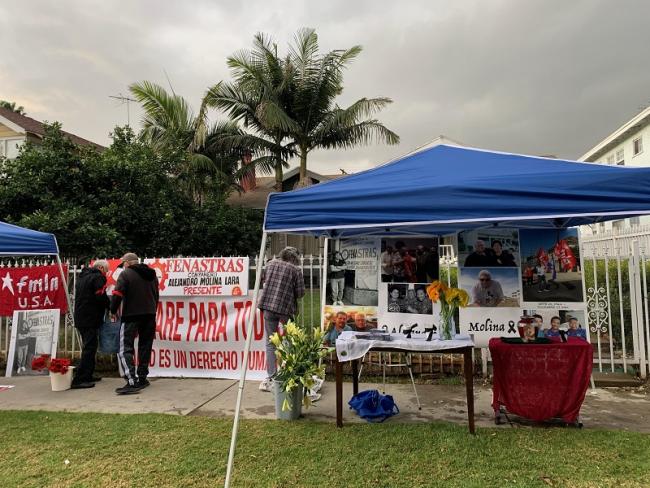 After nearly a year of solidarity work, Alejandro returned to Los Angeles. He then brought his four children and his ex-wife to live with him. A contact in the United Electrical Workers’ Union (UE), whom he had met on the tour, got him a job in an industrial wire plant. He became involved with Local 1421 of the UE, at the time among the few leftist unions. After a year, his Spanish-speaking co-workers elected him as shop steward and eventually he became president of Local 1421, with a presence in seven factories. His anti-authoritarian spirit and his inability to speak English combined to block his rise to national union leadership.

In 1998, Molina Lara led a successful strike against the Industrial Wire Company. The union won a raise from $9.30 an hour to $13 and against obligatory 12-hour shifts. As in Puerto El Triunfo, Alejandro led a strike that lasted months. After the strike, the company took reprisals against him, removing him from his welding position and moving him to the production line. A confrontation with a regional union leader at this precise moment stopped Alejandro from receiving critical union support. At 60, he was not in physical condition for the production line, suited for younger workers. After two years of pain and exhaustion on the line, a coil of industrial wire fell on him; he suffered debilitating injuries to his shoulder and back, forcing him to retire.

We cannot speak about his achievements as a labor leader without mentioning that most of his fellow workers knew Alejandro as a man with a big heart, tremendous empathy for the less fortunate, and a broad smile for everyone.

To learn more about Alejandro Molina Lara, watch the film Puerto el Triunfo, of which he is a principal protagonist. The English version is available from Indiana University Press and the Spanish version can be viewed through the Archivo Mesoamericano.

Part of this article has been extracted from my book Solidarity Under Siege: the Salvadoran Labor Movement, 1970-1990 (Cambridge University Press, 2019).