Moral Majorities Across the Americas (Review)

In his latest book, Colin Snider examines the rise of religious conservative politics as a transnational phenomenon—with roots in Brazil and the United States—that has been ongoing since the 1950s. 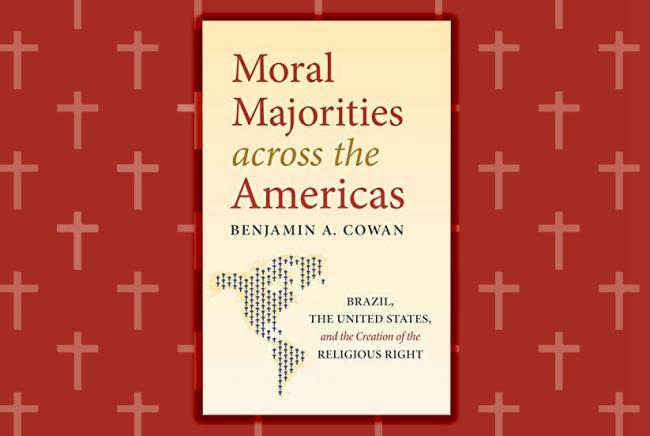 In the 2010s, Brazilian democracy witnessed the greatest challenges to its survival since the end of the military regime of 1964-1985. Exploiting growing political discontent and economic unrest, in 2016, Congress—led by Evangelical Chamber of Deputies president Eduardo Cunha and the Evangelical Caucus—used trumped-up charges of corruption to remove President Dilma Rousseff of the Workers’ Party (PT) from office in what amounted to an institutional coup. In 2018, PT founder Luiz Inácio Lula da Silva appeared set to run for a third presidential term. But judge Sérgio Moro and prosecutor Deltan Dallagnol again used unsubstantiated corruption charges—later overturned—to send Lula to jail, leaving the political landscape open in an election year. In this climate, Jair Bolsonaro, a previously marginal Evangelical politician who had served in the Chamber of Deputies for nearly 30 years and long expressed right-wing religious views and a nostalgia for military authoritarianism, swept into office in a country that had previously elected the left-leaning PT in four consecutive elections.

While many perceived Bolsonaro’s rise as unprecedented and unheralded, Benjamin A. Cowan’s Moral Majorities across the Americas: Brazil, the United States, and the Creation of the Religious Right shows that such seemingly recent political phenomena should have been anything but surprising. Cowan compellingly illustrates that the putatively neo-conservatism is not as “neo” as its name suggests. Challenging scholarship that has focused on the rise of right-wing Evangelical political activism as a hermetically-sealed, U.S.-based phenomenon and situating conservatism in its more global scope in the 21st century, Cowan situates the rise of religious conservative politics as a transnational phenomenon that can trace its roots back to the 1950s. Even more compellingly, Cowan argues that Brazil had a central role in transnational right-wing religious conservativism’s entry into politics.

The introduction draws on contemporary rightists like Bolsonaro and Trump and situates Brazil’s longer trajectory of right-wing moralism from the 1930s to the 1960s, a subject Cowan covered with great success in his previous work, Securing Sex: Morality and Repression in the Making of Cold War Brazil. Chapter one focuses on mid-century Brazilian Catholic conservative bishops who were at the vanguard of an incipient global reaction against modernity. As Cowan demonstrates, as early as the 1960s, conservative Catholics forged this nascent religious conservatism in response to the transformations of the Second Vatican Council of 1962-1965, when the Church instituted considerable theological and liturgical reforms. The progressive wing of the Catholic Church in Brazil and in Latin America has understandably received much scholarly attention, given its role in human rights issues in countries like Chile and Brazil and events like the 1968 Bishops’ Conference in Medellín, Colombia. However, as Cowan deftly reminds us, the Church was no more homogeneous after Vatican II than before. Brazilian conservative Catholics like Dom Antônio de Castro Mayer and Dom Geraldo Proença Sigaud and organizations like the Brazilian Society for the Defense of Tradition, Family, and Property (TFP) were already dialectically reacting against Vatican II, calling for Catholics to resist what they saw as a not-so-creeping modernization, secularization, and even profanation of traditional values and hierarchies. In the process, Cowan argues, they laid the foundation for grievances like moralism, anticommunism, antiecumenism, antistatism, and a nostalgia for the supernatural that would become a key part of the broader religious right in both Catholic and Evangelical circles in following decades.

From there, Cowan’s next two chapters move temporarily away from conservative Catholics to examine Evangelicals on both the right and left in Brazil. Chapter two focuses on the emergence of right-wing Evangelicals in Brazil and the construction of political struggles that paralleled complaints coming from conservative Catholic Brazilians while adding distinctive moralistic twists. Here, Cowan situates moralism at the heart of evangelicalism’s rebound as Brazilian Evangelicals merged politics and religion in ways previously unseen among conservatives. As this transformation unfolded, Evangelicals arrived independently to the same critiques expressed by Catholics mentioned in chapter one: anticommunism, antiecumenism, and anti-modernism, among others. In their efforts to bring religion into the political arena, Cowan demonstrates that Brazil’s military dictatorship—particularly elements of the security apparatus, including high-ranking cabinet members and even João Figueiredo, Brazil’s last military president—actively aided and abetted these actors. Both groups were hostile toward progressive causes applying moralism to the perception that society was moving away from traditional values and hierarchies. When José Sarney became president in 1985 and began cozying up to Evangelical politicians, he was just continuing a practice that had begun under military rule, revealing important continuities between Brazil’s military and democratic regimes.

The final two chapters then telescope out to consider Brazil’s place in broader and parallel processes of religious conservatism in the hemisphere. Fearing the effects of a progressive transnational ecumenism, right-wing conservatives ironically used their own antiecumenical stance to create transnational networks of right-wing conservative activism. Cowan demonstrates the two-way street between Brazilian organizations like the TFP and international organizations like the World Anti-Communist League, as well as individual Evangelical figures like Jimmy Swaggart, Paul Weyrich, and Carl McIntire, creating lines of communication between Evangelical moralists in the South and North. Nor was this a one-way street; indeed, Cowan points out that Brazilian Evangelicals even sent “reverse missionaries” to serve communities in the United States and Europe. In chapter four, he argues, Brazil was unique in the development of these transnational linkages, as it was the only country whose government actively fostered this emergent conservatism. Chapter five continues this transnational scope, situating Brazilians within this emergent antimodern movement. In perhaps his most nuanced chapter, Cowan identifies how right-wing moralists and activists in both the United States and Brazil built a sense of shared struggles on the foundation of antimodernism, anticommunism, antiecumenism, antisecularism, hierarchism, neoliberalism, a nostalgia for a romanticized spiritual past, and a growing persecution complex.

Cowan’s contributions are manifold. Though his book is ostensibly about “the” Right, he regularly shows the heterogeneity of and tensions within the rise of Evangelical conservatism, implicitly suggesting that a pluralized “Rights” better captures the complexities of these political movements. He provides a compelling explanation for the ways in which evangelicalism and neoliberalism became conjoined through anti-statism and anti-communism. He situates sexuality and social justice as essential bugbears at the incipient moments of Evangelical conservatism’s rise. He illuminates how, far from being a movement emerging in a vacuum in the United States, Evangelical neoconservatism was a hemispheric phenomenon, one in which the Brazilian government played an essential role by actively working with and elevating this new conservatism’s actors and concerns into policy and repression. His work uncovers the longer history of what many have treated as a relatively recent phenomenon, providing a major historiographical intervention that will surely serve as a model for future studies on similar movements elsewhere. For instance, though Cowan focuses on Brazil and the United States, his work points to the need to consider similar contacts between and contributions of figures in other Latin American countries in these transnational networks. Similarly, his work lays the groundwork for revisiting, situating, and comparing the emergence of these right-wing, antidemocratic, hierarchalist, traditionalist political movements and activists in places like India and Turkey. In short, Cowan’s work identifies the path of and need for more transnational histories of the Right.

Brazilians voted Bolsonaro out of office in October 2022, but it is also clear that Bolsonarismo is not going away any time soon, primarily because Bolsonarismo is a part of and reflects a more historically rooted right-wing Evangelical conservatism that predated and will outlast Bolsonaro. Throughout the lead-up to Brazil’s first round and runoff elections, religion played a central role on a scale not seen in previous election cycles. Bolsonaro and his supporters claimed they were fighting a “spiritual war” against the “satanist” Lula who would close churches, framing the election as Bolsonaro’s Evangelical-inspired governance against the atheistic “communism” of Lula. And while Bolsonaro may have lost the presidency, his allies won many key positions elsewhere: former Bolsonaro cabinet members Damares Alves and Sergio Moro won Senate elections, while Deltan Dallagnol was elected to the Chamber of Deputies. The Liberal Party (PL)—the party Bolsonaro ran under in 2022—leapt to the largest party in the Chamber of Deputies with 99 members, picking up 66 seats from the 2018 elections. Bolsonaro-allied parties now make up more than half of the Chamber of Deputies and form the largest bloc in the Senate. At the state level, bolsonarista governors won in 14 states. Thus, while Lula won the presidency, conservative Evangelicals increased their presence at both state and federal levels. Lula’s victory may open the path to reestablishing more equitable social policies and reinvigorating democracy in Brazil. But the power of the Evangelical right—a power that has emerged, consolidated, and collaborated transnationally—will not only be a force in Brazilian politics and culture for years to come; as Cowan has masterfully shown, it has already been here for decades.

Colin Snider is Associate Professor of History at the University of Texas at Tyler. He has published several book chapters on higher education, student movements, and truth commissions in Brazil, and has had articles appear in The Americas, Latin American Research Review, and The Latin Americanist.