Gabriel Boric’s resounding victory halts the Right in Chile and throughout the region. Now, he must implement a progressive platform that enacts social change while defending human rights. 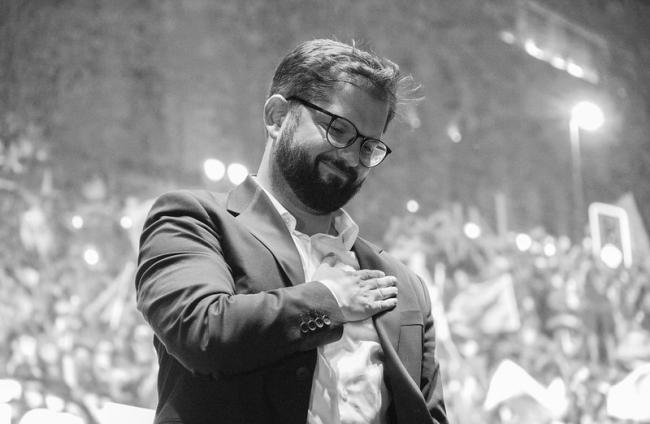 This article was originally published in Spanish on Nueva Sociedad.

Gabriel Boric’s resounding victory over José Antonio Kast once again confirms the power of the “social explosion” that has reverberated across Chilean society. And, it should be added, the process put on display a seemingly flawless electoral system—by 8pm, results were made public and the loser conceded defeat.

Chile seemed to return to “normal.” That is, to electoral victories in favor of progressive social change. The media is right to define this election as historic. The triumph of Apruebo Dignidad, a name spawned by the preceding political battle to successfully organize the Constitutional Convention, bears the promise of change.

The parties that led the post-Pinochet democratic transition were left out of the presidential race, though they did participate in elections for senators and congressional representatives. Boric, the leftist candidate, won 60 percent of the Santiago metropolitan area and, with the help of Izkia Siches, the young ex-president of Colegio Médico and one of the campaign’s best recruits for the second round, managed to make regional gains and won almost 56 percent of the overall vote.

In the first round, the center-left was overwhelmed from the Left by Apruebo Dignidad, made up of the Broad Front coalition and the Communist Party. The center-right, for its part, was stranded at the ballot box after the Sebastián Piñera administration lost its way and ended up supporting, almost unconditionally, a candidate who defended Augusto Pinochet. But this doesn’t mean that, as some international outlets have claimed, that “two extremes” faced off in the Chilean elections. We could speak of an actual extreme on the Right. That was the paradox of this election: Kast’s Pinochetismo—together with his conservative positions on reproductive rights, LGBTQI demands, and feminism—was more unconventional than Boric’s platform. That’s why Kast rallied supporters using the slogan “Atrévete” (Dare yourself). A vote for Kast implied going against the grain. In reality, it meant going against the general sentiment emerging from intense mobilizations and feminist uprisings; movements against the pension funds management companies (AFPs), for the recognition of Indigenous peoples, and in favor of the struggle against climate change and “sacrifice zones.”

In Boric’s case, despite being the candidate of the leftist Concertación coalition, his platform was far from radical. Rather, it is a socially democratic expression of a social justice project in a country where, despite progress in the struggle against poverty, unacceptable forms of social inequality as well as ethnic and class hierarchies persist along with the commodification of society. On the other hand, even though Kast presented himself as a “law and order” candidate, everyone knew that a conservative candidate would have been potentially disastrous given the likely confrontation with the Constitutional Convention once in office, as well as the likelihood of grassroots resistance. “Law and order” in a country that—as seen on the campaign trail and in above average voter participation—remains fiercely mobilized and aligns with change, not the conservative step backward that Kast promised.

Rather than a radical, many on the Left consider Boric, 35, to be too “yellow”—the traditional way of referring to reformist progressives. And a large portion of his success in the second round came from being able to garner the support of Christian Democracy party and the Socialist Party, including ex-president Michelle Bachelet. Now the United Nations High Commissioner for Human Rights, Bachelet traveled to Santiago to vote and recorded a video calling for supporters to back Boric. As was the case with Podemos in Spain, the Broad Front, which originated from student protests, harshly criticized the post-dictatorship transition, but it could not win—much less govern, an increasingly difficult task amid turmoil in Latin America—without the support of the forces who led that transition. Except, unlike in Spain, the Broad Front did manage to surpass the old center-left (at least with the presidency, Congress not so much).

A former student leader and current representative, Boric became a presidential candidate after a period of crisis for the Broad Front by defeating Daniel Jadue of the Communist Party in the primaries. (The Chilean electoral system favors the formation of coalitions to participate jointly in the primaries to take advantage of advertising space and visibility). During the campaign, the now president-elect spoke of a clash between the new Left—focused on human rights—and the outdated Cold-War era communist culture, for example, around topics such as the crisis in Venezuela or Nicaragua. During one of the debates with Jadue, he said, “The Communist Party is going to regret their support of Venezuela just as Neruda regretted his ‘Ode to Stalin.’” Here is where Boric can make a difference with respect to a Latin American Left that is too hardline or “campist” (a term for the tendency to see the world as two opposing geopolitical camps), who end up disavowing human rights discourse rather than transforming it into a tool in the struggle for a more equitable world.

Boric’s candidacy caps a series of electoral victories rooted in the concept of “change”: the massive “approval” of the need for a Constitutional Convention in October 2020, the election of mayors barely in their 30s in several cities across the country, and the composition of the Convention itself. This leadership reflects a strong generational shift, which the Broad Front represents along with new faces from the Communist Party like Irací Hassler, who now governs the Santiago Centro commune. These new leaders are culturally close to the Broad Front and also reflect the rise of a new cohort of feminist women. In fact, the Chilean Communist Party is one of the few examples of a communist party in the West that, without losing its identity, managed to reinvent itself in generational terms, as well as with respect to gender.

It’s possible that the Broad Front’s role in the Constitutional Convention, where it worked in coordination with the Socialist Party and even more so with the Communist Party, anticipates some of what’s to come, i.e. its role as go-between for the Left of the Communist Party and the center-left. During his campaign, Boric had to seem more like Bachelet than Salvador Allende. Ultimately, Chile’s “social explosion” didn’t mean a turn to the traditional Left or a longing for the past, and that’s why the challenge for the new president will be to carry forth the banner of social transformation, above all for a more just country, but without overstepping. Boric’s campaign, which in the second round reached the moderate electorate, understood that demands for change express more relative frustration than longing for the time of Allende—although the ex-president who was violently overthrown in 1973 was, for many, a moral beacon of the protests.

With an increasingly unpopular Jair Bolsonaro government, the defeat of Kast—an ally of VOX and other reactionary global forces—also constitutes a halting of the extreme Right in the region. With Boric in Chile, the Latin American Left adds another president—and some already see Brazil and even Colombia riding this wave in 2022. But this “second wave” is much more heterogeneous than the first, and in general, less ideologically focused. Faced with a depleted Latin American Left after the first “Pink Tide,” in a country like Chile—more bureaucratic than others in the region—perhaps Boric can outline a radical and egalitarian democratic path capable of building healthy and stable institutions—a priority that has taken on new meaning during the pandemic. But it could also mean a fresh start: “leftist populism” in the region ended up getting stuck in the moral and political decadence of the Bolivarian project. Boric now faces the challenge to show that social issues can progress without harming civic life—although that depends not only on him, but also the future opposition, both political and social. The record number of votes that brought him to La Moneda (Chile’s presidential palace) undoubtedly gives him power that no one expected days before this election.

“We hope to do better,” he said to Sebastián Piñera, politely but forcefully, in accepting a transition meeting over breakfast. Soon after, standing before a crowd, he began what will undoubtedly be a new cycle. Possibly the end to the transition as we knew it.