The Voices of Support for Occupy Wall Street

On November 17, the two-month anniversary of Occupy Wall Street, occupiers and supporters took to the streets of New York City for a day of action. 30,000 marched from Foley Square over the Brooklyn Bridge. Among those in the crowd were unions, teachers, students, immigrants, youth, and older activists—united in support for Occupy Wall Street.

On Thursday, November 17, the two-month anniversary of Occupy Wall Street, occupiers and supporters took to the streets of New York City for a day of action. In the morning, protesters blocked intersections around Wall Street, resulting in over 200 arrests. University students across the city held a day-long strike. In the afternoon, roughly 30,000 people gathered at Foley Square for a rally. Shortly after dark, the multitudes marched past City Hall and over the Brooklyn Bridge. 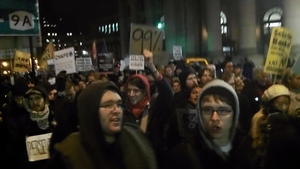 November 17 march to the Brooklyn BridgeThe words of the chant, “El pueblo unido, jamás será vencidos” (The people united, will never be defeated), echoed off the buildings of Centre Street in Lower Manhattan just South of Foley Square. Among those in the crowd were unions, teachers, students, immigrants, youth, and older activists.

“Why did you come out here tonight?” I asked a pair of students in the crowd.

“We are part of the cause. We had to come out here. I have been here since the second week supporting,” said Juan Peralta, a high school student from Washington Heights, whose parents are from Venezuela and the Dominican Republic. “Its time that we revolt, its time that especially starting from us the youth, we are the ones that are suppose to stand up because for many years our predecessor didn’t stand up, and its about time that we fight for everything that they had to suffer through.”

The chant “whose streets? our streets!” cut through the crowd, drowning out Peralta’s voice. He smiled, looked at his friend, Candice Rodriguez. They both motioned to the march. “Exactly,” they said, almost in unison, “this why we are here.”

“It’s sad that I am sixteen and if I got a job right this second I would get taxed more than a rich person would, of the 1%,” said Rodriguez who is from Queens, is of Puerto Rican and Irish decent, and like Peralta, is studying journalism at the High School of Graphic Communications Art in Midtown Manhattan. “That’s why I feel like its unjust that we have to pay the banks to be bailed out.”

Not far behind Peralta and Rodriquez, in the sea of marchers, was Jane Lu, from Families for Freedom, a New York-based network by and for immigrants facing and fighting deportation.

“I have been a progressive for a long time. I know about Occupy Wall street since the first day they announced it in an email and I have been following it closely. After they arrested 700 people on the bridge, I come every chance I get to Occupy Wall Street and I’m always very excited about it,” said Lu.

“A lot of things that I have been thinking about over the years I get a chance to talk about it at Occupy Wall Street with the people,” said Lu. “Like the problem with modern society, with the government, with Wall Street, social issues, there are so many things. It’s all adding up to this point. There are a lot of problems not just one problem.”

Lu has lived in the United Sates for 16 years, but she was born in Vietnam, and grew up in China, where she participated in the Tiananmen Square protests.

“They had protest every year in Beijing in those years and that year they started on April 15, When [CPC General Secretary] Hu Yaobang, in the Communist Party, died. It went on until June 4; the Chinese government couldn’t take it anymore,” said Lu. “I don’t know if this will come to that point. The government was so scared.”

Lu finished speaking and the woman behind us tapped me on the shoulder. “I was at the Pentagon for the big march on the Pentagon in 1967,” she said, referring to the October 21, 1967 march, when 100,000 people descended on the Pentagon against the Vietnam war. Her name was Leah Margulies, and she worked with NACLA in the 1970s. I asked her to tell me more about the Pentagon march.

“So how does it feel to be here today?” I asked.

“It’s great. I think it’s wonderful when people come out and stop being inactive and passive and try to change policies,” she said.

“Why are you here tonight? Why is this so important?”

Michael Fox is editor of NACLA Report on the Americas. More of his work can be read at blendingthelines.com. See also "Strengthening the Occupy Movement: An Interview With OWS en Español," by Renata Pumarol. For more on Occupy Wall Street, visit the website, occupywallst.org.