Homage to a Criminal in Chile

In November, Chilean mayor Cristián Labbé announced a tribute to a former member of Augusto Pinochet’s secret police, who is serving time on 23 counts of human rights violations. The event, which was held on November 21, sparked outrage, protests, and a debate over public accountability and reconciliation.

On November 21, loyalists to the former Chilean dictator Augusto Pinochet (1973–90), held an honorary ceremony for Miguel Krassnoff, a retired brigadier who worked for Pinochet’s secret police from 1973 to 1977. Krassnoff, 65, was imprisoned in December 2006 and sentenced to 144 years in prison on 23 counts of human rights violations. 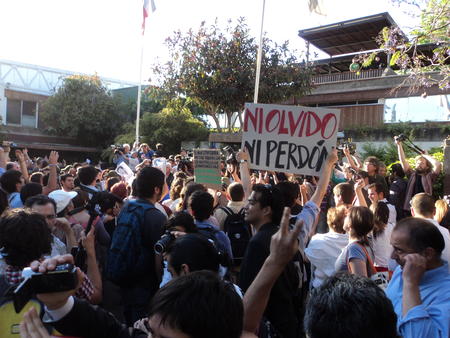 "I don't forget, nor forgive." Protesters on November 21 (puroperiodismo.cl)Protesters confronted police and attendees for several hours outside Santiago's exclusive Providencia Club, where the right-wing political party Independent Democratic Union (UDI) hosted the ceremony. The demonstrators tried to enter the building, and threw rocks and other debris at police protecting the ceremony, who responded with tear gas and water hoses. The crowd shouted "assassin" as attendees exited the homage through a police barricade.

Although he was unable to attend the event, Mayor Cristián Labbé of Providencia, a municipality of Santiago, called for the tribute. Labbé knows Krassnoff personally from their years studying at Chile’s Military Academy in the 60s. During the dictatorship, both men worked at the National Intelligence Directorate (DINA),  Pinochet’s Gestapo-like secret police—Labbé, as chief military escort for Pinochet. The November 21 event served to launch the new edition of the book Miguel Krassnoff, Prisoner for Serving Chile, by Chilean historian Gisela Silva Encina.

Chilean writer Hermógenes Pérez de Arce attended the ceremony and defended Krassnoff in an interview with CNN Chile, stating that the brigadier never kidnapped or tortured anyone. Arce also criticized the violence by leftists groups outside the homage.

"The left has shown its true face in its most typical form: violence, intolerance and persecution of democratic people, as they did in 1973 and as they have done many times since then," said de Arce. Nineteen seventy three was the year of the U.S.-backed military coup that overthrew President Salvador Allende and put Pinochet in power for 17 years.

While Pinochet loyalists, including Mayor Labbé, still believe Krassnoff is innocent, his 2006 sentence and role during the dictatorship years tell another story. Krassnoff led the Halcón group of the DINA, charged with kidnapping, torturing, and assassinating members of the Leftist Revolution Movement (MIR), who were involved in an underground resistance against the Pinochet regime.

Since Labbé announced the Krassnoff ceremony in mid-November, Chileans have generally responded in outrage.

"This is a tribute to torture, assassination and rape. The country cannot be a quiet accomplice," said Senate president Guido Girardi, of the leftist Party for Democracy.

The Director of the National Institute for Human Rights (INDH), Lorena Fries, also spoke out against the mayor's decision. "We consider this a slap in the face, and an embarrassment that a mayor of this country would call for a homage to a criminal," said Fries.

A debate has broken out in Chile over the issue. Should a public official be allowed to propose a ceremony to commemorate a prisoner whose crimes aided the torture and assassination of some of Chile's brightest thinkers, artists, and professionals?

Many argue that Labbé’s actions are protected by freedom of speech. Chile’s Secretary General Andrés Chadwick publicly lamented the tribute, but defended it as Labbé's right to free expression.

"This is a government that knows how to respect . . . the freedom of speech that is consecrated in our Constitution. Respect isn't just when I like something, but when I don't like something," said Chadwick.

However, human rights lawyer and congressional representative Hugo Gutiérrez argued that as a public official, Labbé has a strong obligation to Chilean citizens, thousands of whom have family members who remain missing since the crimes of the dictatorship.

"There are an infinite number of people who have felt mistreated by this public and political official. As a consequence, [the tribute] is without a doubt a crime," said Gutiérrez.

Gutiérrez, together with other members of Chile’s National Congress and human rights organizations, filed for legal action against Mayor Labbé on November 18, three days before the tribute. The group, which includes the Association of the Relatives of the Detained-Disappeared, directed by Lorena Pizarro, presented a criminal lawsuit to a Santiago Court against Labbé for humiliation and damages caused by the tribute.

The lawsuit requests Labbé to appear in court to face charges, and that testimonies of those tortured under Krassnoff’s supervision be permitted to be used during the trial. The group is awaiting a judicial response.

In Chile, there is no precedent for trying politicians for such actions. As Chile’s human rights lawyers debate the legality of the tribute, they look to European laws that criminalize blatant denial of crimes against humanity. The European Union's policy on racism and xenophobia holds that denying or grossly trivializing "crimes of genocide" should be made "punishable in all EU member states." However, there is no law in Chile to defend the memory of the "politicide," or political genocide, that took place during the Pinochet dictatorship. 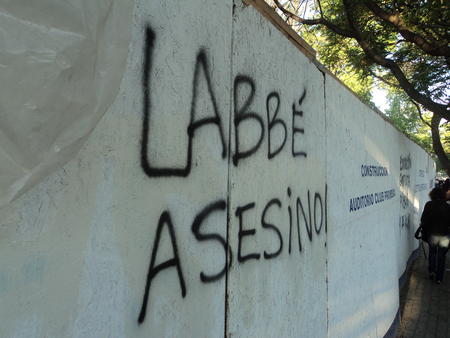 In addition to Krassnoff, Labbé also played an important role in the Pinochet dictatorship. He was a chief military escort for Pinochet. He was later integrated into DINA as an instructor of special police agents at the Villa Grimaldi torture facility.

Labbé was interrogated in 2003 over a torture case in the Tejas Verdes detention center. The judge absolved the allegations upon deciding that teaching torture methods is not a crime in itself.

While Pinochet was under house arrest in London in 1998 for nearly a year and a half, Labbé visited him 14 times. Pinochet was awaiting extradition to Spain to stand trial for torture and murder of Spanish citizens in Chile, but was released in Britain on humanitarian grounds, which stated he was too ill to stand trial. Despite his involvement in the dictatorship, Labbé was elected mayor of Providencia in 1996 and has won every re-election since.

In the midst of student protests and institutional police repression, every move by Chilean politicians is being monitored and examined by citizens and journalists. Even conservative members of congress make a point to at least sound like they tacitly agree with the proposed education reform. Given this current political environment, Labbé’s move to recognize Krassnoff came as a shock to the public.

Nevertheless, a survey this year by INDH reveals that 20% of Chileans do not believe that basic human rights were brutally violated during the 17-year dictatorship.

"Twenty-one years since the end of the dictatorship, and we are at this level of ambiguity," said INDH director Fries. According to Fries, the ambiguity is evidence that Chile has a long way to go toward political reconciliation.

A glimpse of justice ironically appeared on the same day of the November 21 tribute, when Krassnoff was accused of another crime during the dictatorship. Judge Alejandro Solís accused Krassnoff and three other DINA agents of kidnapping Newton Morales Saavedra on August 13, 1974. Saavedra, along with about a thousand others, remains missing to this day.

Brittany Peterson is a photojournalist based in Chile. Her work can be found at brittany-peterson.com.