Protestors in Cajamarca, Peru, are anxiously awaiting a ruling by the Peruvian constitutional court. The court is expected to decide this week if the Cajamarca regional council overstepped its constitutional authority when it unanimously approved a law on December 28 banning the construction of the new multibillion-dollar Minas Conga gold and copper mine.

Protestors in the northern highlands region of Cajamarca, Peru, are anxiously awaiting a ruling by the Peruvian constitutional court. The court is expected to decide this week if the Cajamarca regional council overstepped its constitutional authority when it unanimously approved a law on December 28 banning the construction of a new multibillion-dollar gold and copper mine. Cajamarca residents claim the Minas Conga mine threatens to pollute area farms and the local watershed. However, Peruvian president Ollanta Humala stands by the project, arguing the mine will not harm the environment. 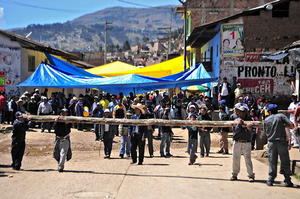 Conga Mine Protest (globalvoicesonline.org)Development of the $4.8 billion open-pit mine has been stalled since November, when over 10,000 campesinos took to the streets in Cajamarca, a city of 200,000 people, clashing with riot police, barricading roads, and briefly shutting down a regional airport. The 11-day protest became increasingly violent, and on December 5 Humala declared a state of emergency, sending the army into Cajamarca to break the anti-Conga protest. The plan backfired, however, and protestors hardened their opposition to the project. Urging dialogue, Humala sent a government delegation, led by former prime minister Salomón Lerner Ghitis, to speak with local officials who support the protest. But the dialogue failed, provoking the resignation of Lerner and 10 ministers in Humala’s cabinet. Humala has since offered a $1.6 billion regional stimulus package and called for an international panel of experts to do an independent review of the mine’s 18,000-page environmental impact statement. Protestors have stood firm. On January 3, they launched a two-day demonstration and pledged future action if the government refuses to cancel the mine.

Gregorio Santos, Cajamarca’s regional president and sponsor of the regional anti-Conga law, claims that the local government is within its constitutional right to block Minas Conga because the mine violates a federal environmental law prohibiting mining in or around watersheds. On top of challenging anti-Conga law in the constitutional court, the Humala administration has also launched a campaign against Santos himself. On December 29, the government announced that it would take legal action against Santos for blocking “all industrial activity” in the immediate area surrounding Minas Conga.

Santos, for his part, says he is optimistic that the constitutional court will side with Cajamarca and not the central government, noting that the court recently blocked a bid for oil exploration and exploitation in an Amazonian national rainforest reserve in the district of San Martín over concerns that oil developers would pollute the watershed and rivers.

In defending the local law, Santos can also draw on the long, sordid history of environmental blunders by the U.S.-based Newmont Mining Corporation, the owner of Minas Conga and Yanacocha, another mine just 15 miles south of Minas Conga. Operating at Yanacocha since 1994, Newmont has earned an infamous reputation with local campesinos for destroying lakes and allegedly polluting the groundwater with cyanide, a byproduct of the mining process that poisons humans and the ecosystem. In 2000, an estimated 1,200 campesinos were exposed to high levels of mercury, when a damaged truck, contracted by Yanacocha, spilled over 330 pounds of the element. The trail of mercury stretched along 25 miles of highway, and though Newmont offered to pay local campesinos to collect the mercury, it failed to give them gloves and respirators to protect them from the toxic chemical. Over 200 people required hospitalization for mercury exposure and numerous others suffered side effects including fatigue, skin rashes, and chronic headaches.

Protests are common in Peru, and the uprising in Cajamarca is not unique; there are many others elsewhere in the country. But recent years have seen mounting tension between campesinos, mining companies, and Peru’s central government. Currently there are over 200 ongoing social conflicts over natural resource extraction in Peru, most occurring in rural and impoverished regions of the country. Such protests often turn violent and have resulted in more than 191 deaths since 2006, including three killed in protests that erupted in April at a mine outside the southern city of Arequipa. Earlier, in 2009, a protest in Bagua over land speculation led to clashes with police. Rather than enter into dialogue with protestors and listen to their complaints, former president Alan Garcia sent in the army into Bagua to quash the protest. The ensuing violence left 10 protestors and 23 police officers dead, angering campesinos and heavily damaging Garcia’s public popularity in the process.

Humala, who took office in July, campaigned on a nationalist-populist platform of social inclusion and in defense of campesino interests. He has so far avoided such missteps and seems to be open to dialogue with campesinos. But six months into his presidency, Humala is showing signs that he is moving toward the right, listening more to the business community than to his political base. In a somewhat ominous move, Garcia, known for his use of the army to quell social conflicts, has openly endorsed Humala’s use of the military to suppress the protest in Cajamarca. Humala has also softened his rhetoric about the mine. While campaigning for president, he came out against the Minas Conga mine for its potentially adverse environmental impacts, stating, “You can’t drink gold.” He seemed to realize at the time that, with one in three Peruvians still living in poverty and often benefiting little from the mines in their communities, protecting the environment is akin to protecting the welfare of campesinos. But five months later Humala shifted his position, instead calling the mine vital to national development. “It’s an important project for Peru,” Humala said on November 29. “It will allow us to realize the great transformation and the social inclusion that we offered the Peruvian people.”

Humala’s increasingly neoliberal rhetoric and his decision to use the army to silence protestors might not be surprising, as mining accounts for 61% of Peru’s export economy, is a major generator of jobs, and is a key to keeping the Peruvian economy afloat during the global economic recession. But then again, the Cajamarca campesinos’ position is equally unsurprising, given the environmental damage bequeathed to the region by the Newpont Mining Corporation. With tensions mounting and a resolution to the conflict uncertain, it remains to be seen if there will be a repeat of Bagua in Cajamarca.

The upcoming decision by the constitutional court will determine the future of the Cajamarca controversy, and might even set a legal precedent for increased local control over mining projects. In the meantime, both sides remain intransigent. "The president lacks the power of persuasion, so he has had to resort to the power of guns,” Santos said, referring to the army occupation of Cajamarca. “When you can't convince with words, you rely on gun barrels."

Bryan Finlayson is a freelance journalist and editorial assistant at NACLA. He holds a B.A. in journalism and an M.A. in international relations.