Contradictions in Power: Reflections on the Plurinational March for Water and Extractivism in Ecuador

On March 22, the global day of water, thousands participated in the Plurinational March for Water, Life, and Dignity to protest the Ecuadorian government’s promotion of large-scale mining—Correa’s government is the first to open up the country to large-scale mining.

April 19, 2012
Tweet
Valerie Carmel
On March 22, the global day of water, between 15,000 and 20,000 people arrived in Quito, Ecuador, after walking over 700 kilometers for 15 days. They had started out with only 500 marchers at El Pangui, Zamora —a southeastern district, largely populated by indigenous peoples. Thousands had participated in the Plurinational March for Water, Life, and Dignity to protest the government’s promotion of large-scale mining—Correa’s government is the first to open up the country to large-scale mining. 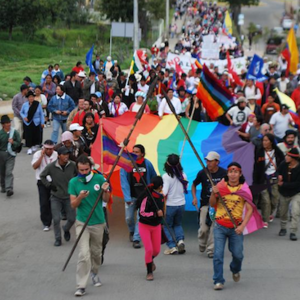 The social movement coalition that participated in the march chose the global day of water to compel Ecuadorans to challenge the extractivist model, and defend alternatives that are more compatible with concepts such as Sumak Kawsay (kichwa for Buen Vivir), which prioritizes living well and in harmony with the environment.
The marchers ended their journey with a 19-point declaration that rejected large-scale mining and other mega development projects (e.g., dams and oil extraction), called for the passage of a hydric resources law that would guarantee the right to water, rejected a potential Free Trade Agreement with the European Union, advocated for the protection of labor and collective rights, called for the end of legislation that criminalizes social protests (and has charged indigenous activists with acts of terrorism and sabotage), and preserved the right to previous consultation for communities that are directly affected by state action.
Shortly after the protest began in early March, President Rafael Correa mounted a successful and hyperbolic media campaign linking the movement with potential coup plots by the right-wing opposition. “We are millions more, and no one and nothing will be able to stop the citizens’ revolution,” he declared. Correa’s statement reduced democracy to a matter of numbers, emphasizing representative over participative democracy, and organized a countermarch to defend democracy from those against the “revolution.” Correa further delegitimized the march by claiming it was motivated by the upcoming 2013 elections.
While political motives strayed from the principles of the march, electoral interests did play a role in the rhetoric of some politicians who used the march as a platform to launch or consolidate their political agendas. For example, Azuay’s prefect Paul Carrasco said that the government had “lost its north, and lost the intention to administrate the state.” Carrasco’s political interests undermined the march, which prioritized vocalizing specific demands instead of reducing the mobilization to personal attacks against the government. Correa, however, failed to acknowledge that crucial movement leaders denounced Carrasco’s self-interest.
By framing the march as a potential coup, Correa and his communications team tried to create the conditions that would allow them to ignore basic questions about the constitutionality of opening the country to large-scale mining, about who will benefit from these concessions, and about who will suffer the costs. Unfortunately, Correa missed the opportunity to take advantage of the momentum generated by the march to negotiate agreements that would be more beneficial to the public interest.
That said, Correa was accurate in his criticism that the March for Water, Life, and Dignity should not be characterized as “indigenous.” Although the Kichwa Confederation of the Highlands (ECUARUNARI) convoked the march, the issues it addressed affected all Ecuadorans, and the march was supported by the student movement, environmentalists, and other left political organizations.
Even though the march appealed to a wider range of Ecuadorians, the current government continues to be the sole political hegemonic force in the country, largely because people are comfortable. Supporters argue that the Correa government leads a political process that seeks to establish a form of welfare state that has boosted the middle class (partly though the expansion of the bureaucratic state machine), created more schools, hospitals, roads, social services, state-sponsored productive loans, and cash transfers.
To contextualize, one should remember that during the 1980s and 1990s Ecuador adhered blindly to the pillars of the Washington consensus, which led to the systematic demise of the state apparatus and its capabilities to ensure the basic economic and social rights of its citizens. This has led to the current configuration of power. As Ecuador enters a new phase in the edification of the state, the country has also intensified its need for resources that could generate a direct cash flow for the central government, facilitating social investment and other government expenses, including propaganda
In spite of this historical context, it is important to highlight the contradictions in power. The same government that in the 2008 Constitution declared Ecuador a plurinational and intercultural country is attempting to develop through means that corrode the base of interculturality. In promoting large-scale mining the government has alienated social movements that contest the legitimacy and viability of these projects. Ultimately, the government-sponsored countermarch—which gathered thousands in Quito on the eve of the plurinational march’s arrival in the city—was crafted to silence social movements, to portray them as unpopular, and to reiterate that the social movements that challenge the president are part of the old and entrenched opposition.
The plurinational march and the government’s countermarch should make Ecuadorans wonder what is more undemocratic: organizing a march against the extractivist policies of the state, or organizing a countermarch to silence and mock social movements that challenge the current paradigm? Whether or not the march was a success, or a failure—as Correa declared—the social tensions generated by mining and the government’s lack of willingness to dialogue are opening new processes of mobilization.
Valerie Carmel is in a master’s program in local and territorial development in the Facultad Latinoamericana de Ciencias Sociales (FLACSO-Ecuador), and is currently working on a research project about the Ecuadoran indigenous movement in the 90s.
Tags:
Correa
Ecuador
ECUARUNARI
Extractivism
Indigenous
mining
Tweet