Peru: Humala Takes Off His Gloves

Peruvian president Ollanta Humala was elected in 2011 as a left-wing “candidate of change,” promising to end corruption, strengthen national sovereignty, and expand social-welfare programs. But once in office, Humala quickly appointed neoliberal technocrats from previous administrations and struck out against major anti-mining mobilizations.

The following article was published in the Spring 2012 issue of the NACLA Report on the Americas, "Central America: Legacies of War."

On January 5, Peru’s new prime minister, Óscar Valdés, came before the country’s congress for the first time since his appointment in December. Valdés took office as part of a sweeping cabinet reshuffling that followed President Ollanta Humala’s clumsy reaction to popular mobilizations against mining projects in different parts of the country. The prime minister began by asserting that the government would maintain the previous administration’s policies favoring private investment and large-scale mining. “Peruvians,” Valdés stated, “need more investment to create more jobs. What we don’t need is disorder.”

His speech stood as a clear rejection of Humala’s original electoral platform promising a “great transformation,” after his government came to power five months earlier on a wave of popular opposition to the neoliberal policies of outgoing president Alan García. More worrisome still was Valdés’s unambiguous praise for the “pragmatism” of the sweeping and authoritarian economic reforms imposed between 1990 and 1995 by former president Alberto Fujimori. For Valdés, “1990–1995 was the period in which the economy developed in a very practical way, leading to a marked improvement in the country’s economic situation.” Political commentators on both the right and the left were unanimous in characterizing Valdés’s speech as marking a 180-degree turn in a government that had been elected thanks to strong support from the regions most affected by mining, making sweeping promises to remedy corruption and the unequal distribution of wealth in neoliberal Peru. 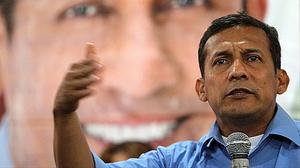 Indeed, when Humala took office in July 2011, many held high hopes for his government’s ability to address the failed developmental and environmental policies, rampant corruption, and uneven distribution of wealth that had characterized García’s administration (2006–10). Marketing himself as the “candidate of change” with the support of important figures on the Peruvian left, Humala had promised to end corruption, deepen access to quality education, strengthen national sovereignty over natural resources, and expand social-welfare programs for the elderly and poor.

His courtship of Peru’s popular and rural electorate, however, did not embrace the popular movements’ long-standing demands for rethinking Peru’s dependency on mining or the neoliberal economic model. Yet the right, backed by monies from large mining corporations, warned that a Humala victory would cause private investment to disappear from Peru and the free press to wither. As an alternative, the right set aside its concerns over “democracy” to rally around the candidacy of Fujimori’s daughter—and political proxy—Keiko, who proposed social handouts accompanied by increased foreign investment. Galvanized by the right wing’s unwavering support for Fujimori, social movements successfully opposed Keiko for her clear ties to the human rights abuses and authoritarian policies of her father’s ousted regime.

Once in office, Humala appointed neoliberal technocrats from García’s government to key economic posts in the Central Bank and the Economy and Finance Ministry, a move welcomed by his former right-wing opponents. In a nod to his electoral base, however, Humala also attempted to distance himself from the outgoing García administration’s exclusionary policies by distributing posts in “social” ministries such as labor, culture, education, and women to campaign supporters and personalities from the Peruvian left, including his first prime minister, Salomón Lerner. In his first weeks in office, Humala also approved incremental increases in the minimum wage, laid the initial groundwork for a consultation law required by international indigenous rights treaties, and launched several social-welfare programs.

Other campaign promises regarding sovereignty over natural resources and the distribution of taxes levied on mining companies were resolved in closed chambers with representatives of the powerful Society of Mining and Petroleum. The new mining tax—which was quickly approved by the new congress—promised to raise $3 billion in new taxes on mining. The increase was effected, however, through a cosmetic shift in the tax structure wherein the burden on mining companies that enjoyed tax-stabilization contracts would be redistributed to allocate more money to a general mining “levy” (gravamen), and less to the royalties that benefit Peru’s regional and municipal governments. As a result, many of the same regional governments that had enthusiastically supported Humala’s candidacy now face a significant decrease in the income they receive from mining. Humala’s campaign promise to enact a 45% tax on mining profits was not part of the new tax agreement.

Public debate on the duplicity of the new tax laws was soon overshadowed, however, by a wave of peasant and indigenous mobilizations against mining projects in the Andean highlands. Within weeks of Humala’s inauguration, major mobilizations were staged in the departments of Ancash, Apurímac, and Cajamarca—which are characterized by extreme poverty, long traditions of subaltern politics, and some of Peru’s largest mining projects. The protesters’ demands included an end to all mining in headwaters, a ban on the use of cyanide and mercury, a national ecological zoning code elaborated with citizen participation, and implementation of the national Law of Consultation. Led by Valdés, at the time minister of the interior, the Humala government moved quickly to repress the popular mobilizations. In November, during a strike in Apurímac, Valdés’s heavy-handed approach clashed with the more conciliatory politics of then prime minister Lerner and other left-wing cabinet members who favored negotiation and reform. It also, however, drove home the widening political and cultural divide pitting Humala’s right-wing functionaries against the popular organizations that had helped to bring his government to power.

Speculation over the government’s policy toward popular movements and consultation came to an abrupt end with Humala’s response to the massive mobilizations against the Conga open-pit mining project in Cajamarca. Minera Yanacocha—a joint-venture of Peru’s most powerful mining corporation, Buenaventura, the transnational Colorado-based Newmont Corporation, and the World Bank’s International Finance Corporation—enjoyed the unquestioning support of Peru’s economic elites to undertake the $4 billion gold-and-copper-mining project, the largest investment in Peruvian history. The people of Cajamarca, however, believed Conga would only exacerbate the region’s already critical levels of environmental contamination, territorial dispossession, and health problems. Most striking was Conga’s plan to empty four high-altitude lakes, depleting aquifers that feed six major river drainages.

Despite a well-publicized national poll showing that 74% of the public sympathized with the protesters’ demands, the right waged a relentless media campaign demonizing the Cajamarca protesters and regional government as anti-investment, anti-development, and opposed to the national interest. Having received no concrete response to their demands from the central government, Cajamarca’s popular organizations launched a general strike on November 24 under the slogan “Yes to Water, No to Gold.” In response, Humala declared that he would not “take ultimatums from anybody” and that his government would embrace a more “down-to-earth position [on] water and gold.” In response, protesters quickly circulated videos on social media showing the eight separate campaign speeches in which Humala asserted to Cajamarquinos that “water is more important than gold” and that his government would “respect agriculture . . . and guarantee water for all Peruvians.”

As the strike entered its second week, Humala asked Minera Yanacocha to suspend the project pending new studies. The suspension, however, did not end the conflict, nor did it resolve differences within Humala’s cabinet. A report issued by Environment Minister Ricardo Giesecke clearly warned that “the Conga project will transform in a significant and irreversible manner the river basins, causing several ecosystems to disappear, and fragmenting others.” The minister of mining and energy responded by denouncing Giesecke’s report as “widely exaggerated.” Faced with an imminent political crisis and announcements of national mobilizations in solidarity with the Conga struggle, Humala declared a regional state of emergency just as Lerner was initiating negotiations in Cajamarca with representatives of the regional government and popular organizations. Lerner’s ensuing resignation was followed by the departure of 10 ministers, along with a number of important left-wing political appointees and advisers. The new Valdés cabinet, dominated by technocrats at the service of the Ministry of Economy and Finance, marked a dramatic end to Humala’s much touted “left-wing” flirtation with social and political reform.

As this issue goes to press, the Peruvian right celebrates Humala’s betrayal of his electoral promises as signs of the president’s newfound “maturity” and “pragmatism.” The Peruvian popular organizations that helped bring Humala to power, however, continue to mobilize against Peru’s neoliberal economic model. After a nine-day trek from Cajamarca, the National March in Defense of Water arrived to Lima on February 9, where protesters presented Congress with a legislative proposal that would ban mining in headwaters and allow for the “sustainable management of natural resources” and the “protection of highly vulnerable ecosystems.” Each of the march’s central demands—a ban on open-pit mining and mining in glaciers and wetlands; community sovereignty over natural resources; prohibition of the use of mercury and cyanide; and the declaration of access to water as a basic human right—articulate fundamental challenges to the forms of governance and domination that characterize the extractivist regimes that now rule so much of Latin America.

Deborah Poole is Professor of Anthropology at Johns Hopkins University. Gerardo Rénique is Associate Professor of History at City College, CUNY. Read the rest of the Spring 2012 issue of the NACLA Report on the Americas, "Central America: Legacies of War."