On August 8, three members of Colombia's Association of Injured Workers and Ex-workers of General Motors Colmotores (ASOTRECOL) sewed their lips shut, joining four others in a hunger strike to demand that GM assume responsibility for their workplace injuries. More people are expected to join each week that GM fails to address their demands.

On August 8, three members of the Association of Injured Workers and Ex-workers of General Motors Colmotores (ASOTRECOL) sewed their lips shut, joining four other members who had done the same on August 1. The hunger strikers are determined to go without food until GM meets their demands. More people are expected to join each week that GM fails to address their demands. These protestors say they are prepared to give their lives to defend Colombian workers from being treated as disposable by companies like GM. 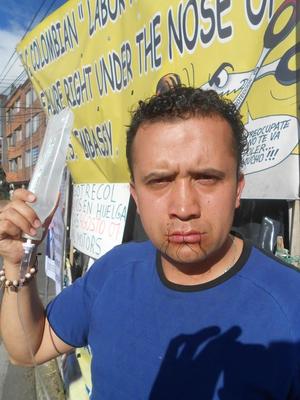 An ASOTRECOL hunger striker (Credit: Austin Robles)Between 2008 and 2011, GM Colmotores dismissed many of these workers after they developed injuries from working on the assembly line. Members of ASOTRECOL say these injuries are widespread throughout the GM plant. For years workers have been diagnosed with repetitive stress injuries affecting the hands, wrists, elbows, and shoulders as well as injuries to the spinal column from heavy lifting. In addition, the accelerated work pace leads to accidents, such as hands getting skewered in machines. The workers also complain of improper exposure to dangerous chemicals and toxic fumes, leading to lung damage and even cancer. These workers assert that after the company medical clinic diagnosed their injuries they were shortly thereafter fired with no compensation.

All of these workers claim to have been let go due to their injuries, yet the official reason for their dismissals is in most cases unrelated: a drop in sales or an expired contract. In some instances the company alleged that the workers damaged vehicles. In one case GM accused an employee of threatening the life of another worker. Members of ASOTRECOL claim these accusations are false and that many of the dismissals were carried out through intimidation and involved falsified papers or corrupt labor inspectors—all with complete disregard for the legal process of dismissing workers with occupational injuries.

GM Colmotores denies that these injuries are occupational, claiming that workers developed them outside the assembly plant. Workers insist that their health issues arose from their work and were exacerbated when forced to work extra hours—claiming that GM threatened to forgo renewal of their one year contracts if they did not work overtime, often 12 hour days, six or seven days a week. Workers contend that the company discouraged the filing of accident reports for fear of damaging their safety record.

Very few of the former GM workers have been able to certify their injuries as “occupational,” which they attribute to GM’s influence over state agencies, as well as the fact that the workers’ medical records remain in the hands of the company (which has not responded to their requests for copies of their records). In one case, a worker discretely filmed his work on the assembly line with a cell phone and demonstrated that the repetition and speed demanded of his position lead to his injuries.

Since leaving GM, members of ASOTRECOL have found it nearly impossible to get a job with their injuries and disabilities. Those who have been able to get their injuries certified as occupational have found themselves essentially blacklisted from employment due to having registered injuries. Those who now walk with canes or have other visible physical disabilities have had trouble finding work. Other workers with less obvious injuries found that they could get work but could not keep it once their pain arose. Over the years, the workers’ precarious situation has grown ever more difficult, while their legal cases against GM have been at a standstill. The impact on their families has been devastating. Many have been without food or have had their water, gas, and electricity cut off. Others have lost their homes to foreclosure, received eviction notices, and been unable to even take their children to the doctor. When asked about the reason for sewing their lips shut and embarking on the high-stakes hunger stri ke, ASOTRECOL president Jorge Parra said, "Essentially, GM gave us a choice: to die of hunger [from the strike] or to die waiting for them to solve this problem."

On August 2, 2011, one year before the hunger strike, ASOTRECOL began protests in front of the U.S. Embassy in Bogotá to try to force GM Colmotores to address the situation. ASOTRECOL members have remained in front of the embassy, relieving each other to go home to their families and then returning to life in an improvised shelter in the street. Conditions have been cold, wet, and rainy; food has been scarce and bathrooms far away. In explaining their decision to set up their tents in front of the U.S. Embassy, members of ASOTRECOL point out that GM is a U.S. company that should be under the authority of the U.S. government. They also maintain that the 2008 bailout saved GM from bankruptcy, explaining that taxes from workers in the United States should not be used to destroy the health and well being of workers in Colombia. As of March 21, 2012, the U.S. government owned 32% of General Motors.

To end the hunger strike, ASOTRECOL demands that GM agree to: 1) recognize their injuries as occupational, 2) assume the costs of the corresponding medical treatment, 3) pay pensions or disability to those who are so severely injured that they can no longer work or can only work part-time, 4) compensate workers for the economic damage that they have suffered, including lost wages and lost homes.

Now in the second week of the hunger strike, ASOTRECOL says that GM Colmotores has failed to respond to their demands seriously, and it looks as if the company will continue to ignore its former workers.

Paige Shell-Spurling is a member of the Portland Central America Solidarity Committee (PCASC) and recently spent a week with members of ASOTRECOL and their families in Bogotá, Colombia. To find out more, visit ASOTRECOL's website: www.asotrecol.com. View the video announcement of the hunger strike or other videos of the workers and their families, www.youtube.com/user/asotrecol. You can also support the workers by signing their online petition.