CLACS Student Blog—The Road to Everywhere: The Geopolitics of the TIPNIS Conflict

At first glance, the TIPNIS road seems to be a domestic issue affecting only Bolivia. Those in favor of the road argue for national development and connectivity, while opponents propose harmonious development that favors the rights and territory of the TIPNIS’s indigenous groups in accordance with Bolivia’s 2009 Constitution. The reality of globalization forces a different reading of the TIPNIS conflict, recognizing the international interests at play and the Morales government’s maneuverings as symptoms of Bolivia’s projection on the world stage. 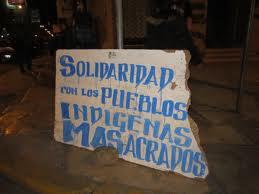 At first glance, the TIPNIS road seems to be a domestic issue affecting only Bolivia. Those in favor of the road argue for national development and connectivity, while opponents propose harmonious development that favors the rights and territory of the TIPNIS’s indigenous groups in accordance with Bolivia’s 2009 Constitution. The reality of globalization forces a different reading of the TIPNIS conflict, recognizing the international interests at play and the Morales government’s maneuverings as symptoms of Bolivia’s projection on the world stage. To understand this better I turned to CEDIB researcher Pablo Villegas and geopolitics, a term which shed light on my research and the way international factors condition Bolivia’s “process of change” even as Evo Morales denounces imperialism, colonialism, and neoliberalism.

Pablo Villegas is the author of a book whose title caught my attention: Geopolítica de las carreteras y el saqueo de los recursos naturales. Inspired by the TIPNIS protests, Villegas set out to document a comprehensive history of Bolivian infrastructure and development through the lens of geopolitics. Geopolitics is the control over territory and resources and is employed to understand a nation’s international position and who/what effectively controls its destiny. Traditionally, Bolivian geopolitics has been understood as the control other nations and commercial interests exert over Bolivia. As a result, the argument goes that Bolivia has been unable to develop at the same rates as neighboring countries due to lost wars and rampant extractivism of natural resources. Villegas, however, compellingly proposes that the true cause of Boliva’s weak geopolitical position is due to internal rather than external factors. Specifically, Bolivia’s political and economic elite have used extractivism to better their own position while developing infrastructure conducive to access natural resources in indigenous lands, creating an internal geopolitical strategy to control and subvert territory under the Bolivian state.

Villegas even goes as far to identify two dominant geopolitical strains of thought in Bolivia, one advocated by the elite for the nation’s development through the exportation of natural resources, the other more decidedly patriotic and focused on domestic reliance and production. According to Villegas, President Morales has succumbed to the elite understanding of geopolitics, leading Morales to seek control over internal territory where the Bolivian state has little presence in the name of development through the extraction of natural resources. Taking this argument a bit further, the goals of Bolivian internal geopolitics (managing a national territory) and foreign commercial interests (accessing territory with natural resources) in the TIPNIS for resource extraction coincide. Is this by chance or is there something deeper? 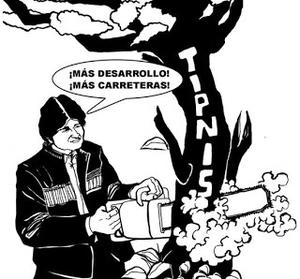 Once the champion of Bolivian autonomy and self-reliance, Evo Morales is now forced reconcile the reality of extractivism with the hope for a different future he represented. Why is this? This change in attitude is most apparent in Morales’s treatment of the TIPNIS conflict and indicates the pressures of a globalized world with nations in international capitalist competition. In this way, Morales has turned the debate over the historical consequences of extractivism on its head. Instead of focusing on the issue of foreign companies and nations coming to raid Bolivia’s natural resource, Morales instead places the Bolivian state at the center of extractivist efforts. This is the great geopolitical dilemma of the TIPNIS conflict as the Bolivian state “recenters” itself to manage national territory and economy, which in turn debilitates the promises of indigenous sovereignty and autonomy Evo Morales once defended.

Curiously, however, this recentering of the state coincides with the interests of foreign interests. Bolivia’s natural resources still attract the attention of multinational corporations and foreign governments with Brazil financing most of the TIPNIS road and authorization granted to joint ventures between Bolivian YPFB and foreign multinationals for future extractivist projects in the TIPNIS. These projects will report big profits for companies, as well as tax revenue for the government, and for now the only thing standing in the way of this bright future is a road to reach and extract the natural resources of the TIPNIS. With this in mind, the importance of an internal geopolitical strategy makes sense and helps explain the brutal repression of TIPNIS protestors and the insistence of the MAS government in constructing the road.

As Pablo Villegas eloquently puts it, Bolivia’s geopolitical situation is one defined best by the term “geopolítica de las pulgas”—or the geopolitics of fleas. For Villegas, Bolivia is a flea denouncing the dog it obediently follows everywhere, namely the forces of capitalism, criticized as “imperialism” or “neoliberalism” by Evo Morales. The TIPNIS conflicts, in light of a geopolitical analysis, reveals the limitations of a process of change, forged in the fire of domestic struggle and aspirations, yet operating within the realities of international pressures and realities.

See original blog post at the Center for Latin American and Caribbean Studies at NYU blog.

Michael Abbott is an MA Candidate at NYU's Center for Latin American and Caribbean Studies.