In a NACLA-CLACS co-sponsored event on October 31, Manuela Picq spoke with Carlos Pérez Guartambel, the current leader of Ecuarunari, (Ecuador Runacunapak Rikcharimui, Confederation of the Kichwa of Ecuador), the historically powerful indigenous organization in the Ecuadorian highlands. 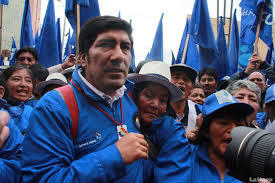 In a NACLA-CLACS co-sponsored event on October 31, Manuela Picq spoke with Carlos Pérez Guartambel, the current leader of Ecuarunari, (Ecuador Runacunapak Rikcharimui, Confederation of the Kichwa of Ecuador), the historically powerful indigenous organization in the Ecuadorian highlands. The event was translated by Antonia Carcelén.

Carlos Pérez Guartambel: Indigenous resistance in Ecuador today is weaker than it was in the 1990s. This is due in part to our process of institutionalization, which at times lost touch with grassroots concerns and at other times fell prey to poor leadership. We need to be more attuned to our community bases.

The government may continue its attempt to render us invisible, but our struggle cannot be defeated. As long as there is injustice, as long as the profound inequalities between the urban and the rural remain, the indigenous movement will continue.

We are the last bastion of opposition in Ecuador. The last call for resistance. The last hope. This is why the government is trying to co-opt us, to impose upon us its authoritarian, capitalist, modernizing, extractive, patriarchal, racist politics. The system is collapsing, and we believe in the sumak kausay as an alternative model.

MP: Ecuador’s government adopted the indigenous principle of ‘sumak kausay.’ It is now part of the constitution and guides various policies from housing to health. Explain what it means and how the government uses it.

CPG: The government has made rhetorical use of the sumak kausay, reducing it to folklore. The principle of sumak kausay cannot be explained. It must be felt, experienced, practiced. But let me try to explain the unexplainable.

Sumak kausay is the brotherhood and sisterhood, the fraternity among peoples. It is a connection not only among humans but also with our animal brothers, and our sisters, rock and trees. It’s the brotherhood of the cosmos. It is not exploitation and extractivism, but sharing. It is not accumulation but solidarity. It is not consumerism, but to use only what is necessary. It is about not hurting Mother Nature like capitalist systems do when they mine our highlands rich in fresh water.

The government does not practice this sumak kausay, despite it being part of the 2008 Constitution. Our constitution has become the main obstacle to the national government as it tries to move forward with its plan to drill for oil in the Yasuni National Park. Ecuador has the only constitution in the world to respect the rights of nature, yet our governmental practices go against such laws. Who would acquiesce to aggressions against one’s biological mother? Why would we authorize aggressions against Mother Nature, our larger home?

MP: According to the Observatory of Mining Conflicts in Latin America (OCMAL), there are more than 195 active conflicts due to large-scale mining in the region.  Peru and Chile lead the list with 34 and 33 conflicts respectively. In Peru, mineral exploration expenditures have increased tenfold since 2002, while 25% of Chile’s territory was under exploration or operation in 2010. Most of mining and oil industries are located on indigenous lands and anti-extractivism has become a focus of Indigenous resistance. What is the situation of extractivism in Ecuador today?

Extractivism is the same everywhere. In Ecuador it looks the same as in other countries. It erases difference between the political right and left because governments with different ideologies perpetuate the same perverse practices. All governments end up contaminating our natural resources. There is no difference from Canada to Central America to Argentina. Indigenous peoples are criminalized for protecting their waters; vilified, defamed, and persecuted for fighting for life in their lands and territories.

In Ecuador, there are 200 people criminalized for defending the rights of nature. Journalists have been pushed out of their jobs for dissenting with governmental policy, and the youth incarcerated for gathering in defense of water. A new criminal law is increasing legal jail time, and the infamous Decree 016 attempts to eliminate community organizations to make any space of resistance into illicit activity.

MP: Your leadership is anchored in the defense of the highland waters against mega-mining in the region of Kimsacocha, southern Ecuador. What does resistance looks like on the ground?

CPG: Resistance is not only taking over the streets. It requires creative solutions that are not in front of our eyes. In Kimsacocha, we organized a popular consultation without state authorization—the state would not organize one, so we did. We organized it with our own communities and indigenous institutions, and the result was 93% in defense of the water and against mining. This grassroots process was not organized by the state; it was legitimized by the presence of international observers.

We also deployed cultural forms of resistance. Colonization imposed its religion and its gods on our lands. So we imagined and conceived a hybrid Virgin of the Waters of Kimsacocha combining ancestral elements of water with the Catholic image of the Virgin. We give love to this Virgin and put our faith in her; she embodies our spiritual motives to defend Kimsacocha waters.

These local actions can be projected to the rest of the continent to globalize resistance, just like extractivism is global. The local actions can impact the global. As we learn through these processes, a pedagogy of resistance takes place, and we come up with innovative solutions that hopefully result in positive outcomes.

Since the government disagreed with our consultation process (and even more with its outcome), it declared our consultation fake. It even labeled it as Cantinflas (a Mexican character that talks a lot but does not say much). Yet the United Nations came to Kimsacocha to learn about the process, took testimonies, and established a report that identified our process as one of the best practices of participatory democracy in the world.

MP: The right to free, prior, and informed consultation is increasingly claimed across the world to resist invasion by extractive models of development. It is an important right that needs more legal precision (can non-state actors organize consultations too?), and its vagueness permits governments to easily evade their obligations (as happened in the TIPNIS, Bolivia). In the Yasuni National Park, another challenge is the impossibility to consult the indigenous populations who live in voluntary isolation. Social movements defending the Yasuni against oil drilling are nevertheless adamant about a national consultation. Why insist on consultation given all its limitations?

CPG: We have two options left. We can cross our arms and let the state drill; or we can activate resistance. There are many ways to resist. One way is by organizing marches. Our sisters from the Amazon recently marched from the Amazon all the way to Quito, the capital, to express their disapproval of drilling in Yasuni territories. Another form of resistance is to use our legal political rights to organize a popular consultation. To do this, we must gather 600,000 signatures to force the government to do a popular referendum- and we hope to collect up to a million signatures demanding a consultation.

Then, the Ecuadoran people can vote on whether they want to drill on the last sacred land in the Amazon where our indigenous brothers live in voluntary isolation, or whether they prefer to save that land for our children.

We invite all Ecuadorians abroad to join this effort and collect signatures—especially the youth. The youth are the ones who most stand up for the environment in Ecuador. They lead ecological struggles and strengthen our hopes. We are lucky that our youth have awakened. The Yasuni is defended mostly by the youth, and it rejuvenates all of us.

Why should non-indigenous movements care?

CPG: Because no one could throw the first stone and say ‘I’m not indigenous.’ We are all indigenous in one way or another. Not necessarily on the epidermis, but through many different expressions: in the blood, in the shungo (heart), in our daily practices, in the promises of all brothers, in the solidarity and co-responsibility of our planet. Indigenous peoples are very collective, communitarian, and it makes us proud of being indigenous. That is what we are, indigenous and non-indigenous peoples alike: there are no races, only the human race. There should be no sectarianisms. We may have different visions, and that is good. There are several paths towards a same horizon.

That is why we believe in the youth. If we want to preserve the air, pure; our water, clean and free (not contained in water bottles); the jungle, rich (an invaluable genetic bank where life resides); I welcome every youth to activate resistance, now and without pause, much less excuses.

Manuela Picq is a Member of the Institute for Advanced Study (Princeton) and Professor at Universidad San Francisco de Quito (Ecuador).