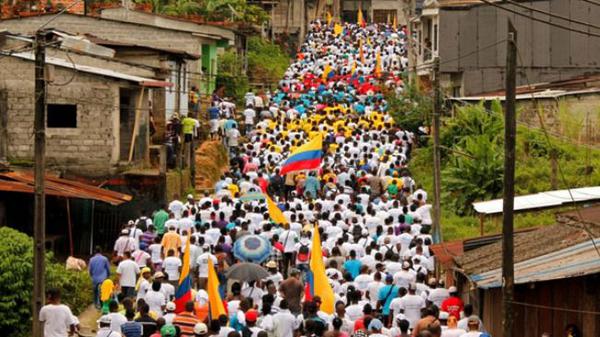 Colombian protesters march through the city of Sincelejo on August 19, 2013 (PressTV)

At talks in Havana two weeks ago, the Colombian government and the FARC rebels came to a basic agreement on FARC's future political participation. This move marks progress on the second of six agenda items in the ongoing peace talks that aim to end 49 years of armed conflict. (Partial agreement on land reform had been reached previously.) Details regarding rebels' political participation still need to be worked out—such as the fate of rebels who are guilty of crimes against humanity—but the prospect that FARC will trade kidnapping and killing for politics marks a step forward.

The significance of FARC’s agreement for Colombia's poor—the people that FARC claims to represent—is unclear. Decades of fighting and insecurity have left a staggering portion of the population internally displaced. As of last year, Colombia had the highest number of internally displaced people in the world—estimated between 4.9 million and 5.5 million by a Norwegian Refugee Council report. (Today, Syria may very well have surpassed that number.) That represents more than 10 percent of Colombia's population. FARC sources tell IPS that there are estates in Colombia of up to 100,000 hectares in size, while 87 percent of peasants have no land.

The 2011 Victims and Land Restitution Law enacted by President Juan Manuel Santos aimed to return millions of hectares of land that had been stolen or abandoned due to violence. However, implementation has been slow, and enforcement has been difficult. According to a 2013 Human Rights Watch report, "Abuses against displaced land claimants and their leaders in recent years—including threats, forced displacements, and killings—have created a climate of fear for those seeking restitution in several areas of the country, such as Urabá, Montes de María, and Cesar."

Nazih Richani, director of Latin American studies at Kean University, tells me: "The actors who displaced these people are still around. They're armed and dangerous. How can you restitute a piece of land to a poor peasant when the new owner has the potential to use force or hire an assassin?" A court order has little effect in this situation. "This has been the key dilemma for Colombia since the time of independence. The restitution law is still confronting serious obstacles," Richani says.

The issue of displacement is a physical, existential threat to many Colombians. In fact, by some accounts, over 60 percent of the country's indigenous population is at risk of extinction due to mining by multinational corporations, armed conflict, and a general failure on the part of the state to protect those who can't protect themselves. But physical displacement is often related to economic displacement. In the case of mining, when multinationals move in, subsistence mining operations are often swallowed up by large, open-pit mines that intensify the contamination of water sources and result in the economic as well as physical displacement of people who have lived in these areas for generations. Those who are not forced or bribed into leaving their homes are often pushed into crime, prostitution, and other desperate means of survival.

In recent months, a wave of protests has swept across several indigenous communities in Colombia. The causes behind these protests vary, ranging from better living conditions and political participation to health reform. Richar Leguizamo, director of communications at the National Organization of Indigenous Colombians, tells Colombia Reports that the protestors are demanding "that the Colombian government treat [their] existence as a priority and not a burden." Indigenous people have taken to the streets in record numbers this year, even as security forces have repeatedly carried out human rights abuses against them.

One of the protestors' central issues is agrarian reform. In August, rural farmers launched a national agrarian strike, blocking highways as part of their protests, demonstrating for several weeks, and enduring various government efforts to sabotage their resolve. Back in March, the government made general promises to farmers related to price support and credit, but failed to follow through on any of it. Richani says, "Importation of food crops from neighboring nations and from abroad has led to a competition at the local level, pushing prices down to the point where local peasants cannot afford selling them. They're not making a profit margin to sustain their own production."

The economic situation for rural Colombians correlates closely with the recent spate of free trade agreements (FTAs) signed by the government. In August 2011, Canada and Colombia signed an FTA that further opened the door for Canadian mining firms. Colombia's FTA with the United States went into effect in May of last year, and its FTA with the European Union went into effect this past August. An FTA with Israel will kick in early next year, giving 97 percent of Colombian agricultural exports tariff-free access to the Israeli market. These FTAs largely benefit big agribusiness, mercantile capitalists, and the Colombian partners of foreign multinationals. "Basically a tiny segment of the dominant elite is cashing in on these contracts," Richani says. "It's a typical looting process under legal camouflage."

Although Colombia is a dangerous place for Colombians, the government has made it a safe place for foreign investors, providing army protection for multinational mining corporations. President Santos said last year that the state dedicates 30 percent of security forces to protecting mining and energy infrastructure. Meanwhile, the people who live atop those rich deposits of gold, silver, nickel, and coal are left in many ways to fend for themselves.

Joshua Pringle is the senior editor of Worldpress.org. He has a master's in international relations from New York University.