Truncated Transnationalism: The Migrant Vote in the 2012 Mexican Presidential Election

With dual citizenship now a possibility, many Mexican Americans have taken an active interest in Mexican elections.

At a June 2012 voter registration training in Modesto, California—where eligible Latino voters are chronically under-registered—activist Dolores Huerta shared her lifelong experience with a group of college student volunteers. “Voter registration is not simply about signing people up,” Huerta said. “It’s about educating voters.” When asked whether the July 1 Mexican presidential election—then only a week away—was beyond the scope of this push to register Latinos to vote in the U.S. presidential election, Huerta stood up from her seat, vigorously shaking her head, and reminded the students that in years past, many Mexican migrants were hesitant to cast a ballot in U.S. elections for fear that it would make them ineligible to vote in Mexican ones. This is no longer the case, she explained, because migrants “can now have dual citizenship."

With these words of wisdom, the students took to the streets and worked the mostly Mexican crowd at Latino supermarkets in the area encouraging people to register. When asked if they had registered, women and men alike commonly replied by asking, “Here or in Mexico?” With Election Day around the corner and ample coverage in the U.S. Spanish-language media, the Mexican presidential election was on Mexican migrants’ minds. 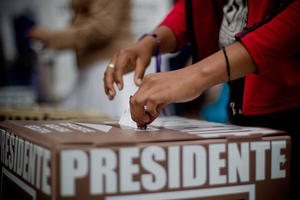 Indeed, in a pre-election survey of registered Latino voters in key battleground states (Arizona, Colorado, Florida, Nevada, Virginia) conducted by the independent polling firm Latino Decisions, 43% of Mexican-born respondents reported paying a lot or some attention to the Mexican presidential race. Interestingly, their candidate preferences did not mirror those of Mexican society. Among U.S. migrants surveyed, Josefina Vázquez Mota of the incumbent PAN had a comfortable lead over Enrique Peña Nieto (PRI), with Andrés Manuel López Obrador (PRD, PT, Movimiento Ciudadano) trailing third. This was a partially accurate forecast of the migrant vote, with 42% backing Vázquez Mota, 39% supporting López Obrador, and a bit over 15% supporting Peña Nieto.1 Yet despite considerable interest expressed by migrants in the Mexican election, participation levels were low, with 40,700 votes cast from the United States and beyond, not a dramatic improvement from 2006.2

Why has migrant voting in Mexican presidential elections been consistently low? The short answer is that the same institutional barriers that constricted the migrant vote in 2006, chiefly among them lack of access to the Mexican voter-identification card, dampened migrant participation in 2012.3 Chicago-based migrant activist Carlos Arango described Mexican extraterritorial voting rights as incomplete. He and other transnational suffragists have been pushing for legislation that would effectively enfranchise migrants and fully allow them to participate in the Mexican electoral process. “What the [Mexican] Congress ultimately approved,” he explained, “was what we have come to call el voto mocho [the truncated vote]. Yes, you have the right to vote, but there is no viable way to enact it.”

For one, the Mexican Congress has failed to allow the issuing of Mexican voter ID cards in the United States. As the electoral law currently stands, Mexican nationals must register in Mexico. As Arango pointed out, for migrants this turns out to be “the most costly vote imaginable.” Decades of empirical research in political science show that high costs to engagement in elections leads to low voter participation. In the words of Arango, Mexican authorities drafted a law “that was designed to fail.”

While there was more continuity than change between the 2006 and 2012 Mexican presidential elections, insofar as the migrant vote is concerned, there were some reforms within the Federal Electoral Institute (IFE) worth noting. With a new team of electoral advisers in 2008 came a renewed effort to reach out to migrants in anticipation of the 2012 election, said the IFE’s Dalia Moreno to a group of migrant leaders in Los Angeles in May 2010. Moreno met with migrants in her capacity as director of a newly created IFE office designed to liaison with migrant organizations in the United States. IFE reforms and outreach strategies included an information campaign at major ports of entry along the border and at international airports, reminding vacationing migrants to process or renew their voter ID card while in Mexico; radio advertisements in high-emigration regions in Mexico prompting locals to remind visiting migrants about applying for their voter ID card; and reduced processing times for the voter ID card to 10 working days with an extended hold period of one year for migrants to pick up the card upon their annual return, if necessary.

None of these reforms were meant to tackle the structural impediments to extraterritorial voting for the majority of Mexican migrants in the United States. The undocumented still have no viable way of acquiring the voter ID card other than returning to Mexico. This issue was not lost on migrants. At an unofficial campaign event for Vásquez Mota in Los Angeles in January 2012, a migrant leader remarked that the policy instrument that could “open up democracy in Mexico includes providing voter ID cards outside of Mexico.” He asked that the presidential hopeful provide “the key to the vehicle of democracy.” “That key,” he said, “is the voter identification card.”

The incoming PRI administration does not seem any more promising for migrant rights, judging from the policy proposals made by Peña Nieto campaign operatives to a group of migrants in San Jose, California, in April 2012—proposals that included an “online consulate” and an office in Washington with the goal of turning the Mexican diaspora into the equivalent of a “Jewish ethnic lobby.” In a post-election Latino Decisions national survey of Latinos in the United States, Mexican-born respondents expressed high perceptions of fraud in the 2012 Mexican presidential election. More than 55% felt that the election was not very or not at all “free and fair.” Moreover, more than 61% agreed in some measure that electoral fraud in the 2012 election questions the credibility of the president-elect. Whether perceptions of fraud will politically alienate or agitate Mexican migrants remains to be seen. However, without the full enfranchisement of the Mexican diaspora in the United States, the migrant vote will continue to be truncated and unrepresentative.

Adrián Félix currently holds the University of California President’s Postdoctoral Fellowship in the department of Latin American and Latino Studies (LALS) at UC Santa Cruz. In fall 2013, he will be joining the LALS faculty as an Assistant Professor.

3. Robert C. Smith, “Contradictions of Diasporic Institutionalization in Mexican Politics: The 2006 Migrant Vote and Other Forms of Inclusion and Control,” Ethnic and Racial Studies 31, no. 4 (2008): 708–41.