A group of student protestors in Rio de Janeiro released demands explaining why they were demonstrating on the streets. These "five-points" reflect grievances that have been plaguing Brazil for some time.

Hundreds crammed into a room for over six hours, passing around the microphone so that everyone could weigh in. The protestors, mostly students, called the meeting in order to better articulate their message after Rio de Janeiro's Mayor, Eduardo Paes, had requested to meet with one of the university groups. They emerged that Thursday night with five demands—"five points"—they felt would bring cohesion to the slogans splashed across the signs being waved in the street.

This meeting, or plenaria, took place on Tuesday, June 18, the day after the protests first surged and two days before over a million people took to the streets in over 100 cities across Brazil. While there is no uniformity to all the protests from city to city, and—as Kate Steiker-Ginzberg, a 23-year-old from Philadelphia who attended the plenaria insisted—there exists diversity among protestors within each city, the five points coming out of the plenaria address issues cutting across the various protests. 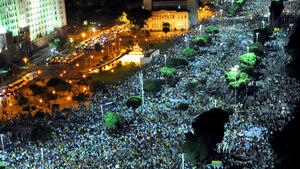 The first point addresses the 20-cent increase in transportation fare, what has been seen as the catalyst for the protests. While this may not sound like a significant fare hike, as Steiker-Ginzberg explains, it represents a “political miscalculation” on the part of the administration. The fare increase was implemented the same day as the Confederation Cup opened in Brazil. Since 2005, this international soccer tournament had served as a rehearsal for the World Cup, which will be held in Brazil next year. Many were frustrated that the price hike would go toward the extravagant sporting facilities instead of improving the dismal public transportation that is often slow, overcrowded, and dangerous—despite the relatively steep price Brazilians pay for their public transportation.

The fare hike was one among many contributing factors to these protests, and together with the other points addressed by the plenaria, reflects grievances that have been brewing across Brazil for quite some time. The second point concentrates specifically on the excessive spending on mega-events instead of on investment in health and education. Along with the World Cup, Brazil is slated to host the 2016 Olympics.

This taps into the broader question of who benefits from these mega-events. While the country is pouring massive amounts of public funds into the construction and improvement of stadiums, some people complain of the poor state of public infrastructure, hospital overcrowding, and low educational performance in Brazil. As soccer-player-turned-congressman Romário de Souza Faria criticizes, the money for the World Cup could have been used for "8,000 new schools, 39,000 school buses or 28,000 sports courts in the whole country."

Cost benefit analysis of mega-events shows that these exorbitant affairs rarely deliver many of the economic outcomes promised. While it is estimated that Brazil will spend over $12.5 billion in preparation for the World Cup, it looks as though private interests are the ones poised to benefit most from these events. FIFA reported a profit of $202 million from the 2010 World Cup in South Africa. As their financial statement boasts, “The 2010 FIFA World Cup South Africa™ was a huge success, a fact that was reﬂected by its ﬁnancial result.” Most of these profits are a result of selling broadcasting rights and sponsorships, with a smaller percentage coming from ticket prices. Similarly, the International Olympic Committee (IOC) garnered $250 million from the last Olympic games, the majority of those profits coming from television licensing.

Furthermore, Brazil has spent over $473 million in public funds on improvements to the Maracanã, Rio de Janeiro’s iconic soccer stadium, which will host the World Cup Final as well as stage the opening and closing ceremonies of the Olympic games. This investment was on top of the almost $300 million that had been spent on renovations to the stadium during the last 15 years. Earlier this year, after months of negotiations, Maracanã was privatized with the granting of a 35-year contract to a consortium of investors for a comparatively low price tag of $85 million. After public outcry over the deal, a judge reversed the ruling, citing irregularities and claiming that one of the companies involved in the deal had an unfair advantage in the process. Finally, on May 13, the judgment was reversed again, allowing the privatization to continue. Beyond the importance as the site for the most high-profile moments in the upcoming mega-events, the stadium has long been a cultural symbol for Brazil. According to Steiker-Ginzberg, “this major symbol of democracy and public space and class intermingling in the city is now being destroyed and privatized.”

The megalopolises of Rio and São Paulo are not the only places the public's money is being spent. Throughout Brazil, $13.9 million will be put toward preparing for the World Cup and the Olympics. In many of these places, such as the northeastern city of Manaus, the excessive and over-budget spending does not seem justified. This is especially true considering that after the games are over, Manaus's $246 million Amazonia Arena is predicted to be underutilized in the city of 2.3 million people. This could be true of other stadiums around Brazil as well—Brasília, Cuiabá, and Natal simply don’t have clubs with a following that would justify the investment over the long term. 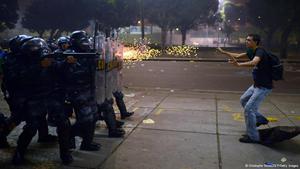 The third concern of the plenaria focused on the criminalization of protests and the militarized response of the police to demonstrations. Social media has been rife with images of the riot police with Choque emblazoned on their shields, indicating they are “shock troops,” shooting rubber bullets, using pepper spray, and hurling seemingly endless canisters of tear gas at protestors. These crowd-control tactics have been so aggressive that some have termed this the Vinegar Revolution, in reference to the palliative effects the common kitchen staple has against tear gas. As Brazil and Security Policy expert Joseph Bateman explained in an interview with the Washington Office on Latin America, while other sectors throughout the government have opened up to civil participation since the end of the military dictatorship in 1985, the security sector has only just begun to do so, and “a lot of police still see their role as protecting the state, not protecting citizens.” This has been an especially salient in São Paulo, where protests intensified in response to images of police brutality, particularly against journalists, that circulated on social media. Shock police shot a journalist, Juliana Vallone, at point-blank range in the face.

This violence against protestors is tied into the fourth point, which aims to democratize the media. There has been criticism that the major media networks, primarily O Globo, have been concentrating on the vandalism and violence of the protestors while largely ignoring the police brutality against the protestors. The fixation on the violent aspects of the protests is also at the expense of the reporting of the largely peaceful expression coming from the majority of protestors. As a university professor remarked after recently arriving for a visit to her native Rio de Janeiro, “it’s sad that some television stations only show the destruction and fail to show the people that want a better Brazil."

The fifth point concerns the forced evictions and community removals resulting from the major urban transformation taking place in Brazil. In 2012 in São Paulo, 2,000 riot police were called in to suppress the uprising of more than 6,000 residents who refused eviction in the community of Pinheirinho. Many of these evictions throughout Brazil are being done in preparation for the World Cup and Olympics. Rio's oldest favela, Providência, has lost its central square—the community’s only public space—to Olympic construction. Almost 5,000 residents are slated for eviction in this community alone. Altogether 170,000 people throughout Brazil are facing removal or have already been evicted. The Popular Committee for the World Cup and the Olympics, a human rights group based in Rio, estimates that over 10,000 families will be affected in Rio de Janeiro alone because of these mega-events.

These forced evictions have been taking place amidst a major real estate boom throughout Brazil. 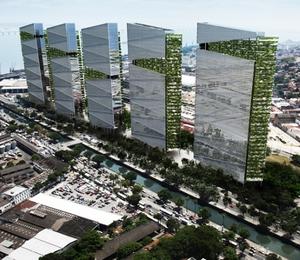 Future Trump Towers (Photo from donnabowater.com) According to Forbes, Brazil is the country with the most rapidly increasing home prices in the world. In Rio, the rise in home prices has been four times greater than the rise in wages over the last five years. Donald Trump is investing in five skyscrapers in the city that, according to the developer's website, will be the "largest urban office development in the BRIC [Brazil, Russia, India, and China] countries."

Critics contend that many of these evictions are driven by economic incentives. The city of Rio de Janeiro has used a host of reasons to justify the demolition of the community of Vila Autódromo—from environmental and safety concerns to its use as a security or media zone for the Olympics. It is reported that the mayor of Rio de Janeiro, Eduardo Paes, entered into a partnership with private companies that will open up 75% of this site for private development after the Olympics. His reputation for these kinds of deals recently made headlines after a physical altercation with a constituent who accused him of catering to the interests of developers.

While the government does provide several forms of compensation to communities facing removal, the resettlement programs have systematically moved poor residents away from the high-value land and into peripheral areas of the city with little access to transportation or employment opportunities. Furthermore, O Estadão  reported that the City of Rio de Janeiro paid $8.9 million for resettlement land to two companies—both contributors to Mayor Paes's election campaign. After this was revealed, Paes revoked the deal. 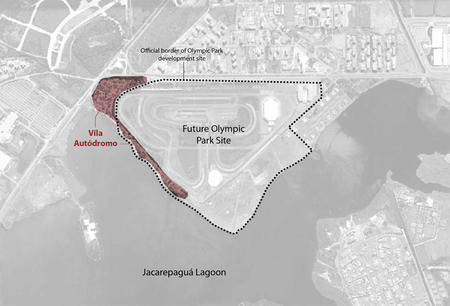 On Saturday, June 15, communities affected by these evictions came together on the same day as the Confederation Cup opened, not far from Maracanã stadium for their own soccer tournament. The People's Cup Against Removals was organized to "give a voice, to give time, to give space for those being excluded and for those being removed." The stark contrast between the newly renovated stadium hosting the precursor to the World Cup and the small and humble field occupied by the People's Cup players reflected the disparities at the heart of many of these protests. "I think that's something that people woke up to," remarked Steiker-Ginzberg, "the disparity between the investment in these stadiums and then people overflowing out of the public hospitals and ambulances not arriving on time . . . You can't just reverse a 20 cent hike and expect everyone to get off the streets."

Kyle Barron graduated with an MA in comparative politics at New York University, and is an Associate Editor at NACLA.