The wave of protest that has swept Brazil over the last two weeks has caught analysts and politicians by surprise. While protestors call for the end of political corruption, many of these complaints have been framed by the mainstream media.

The wave of protest that has swept Brazil over the last two weeks has caught analysts and politicians by surprise. The Free Fare Movement (MPL in Portuguese), an organized social movement that for years has fought for lower public transportation costs in São Paulo, began demonstrations on June 6, with a small rally attended by around 3,000 people. This was received by the state police force with tear gas and rubber bullets, and in the following days, the MPL responded with more marches that were treated in the same violent fashion by the police. Militants were arrested and some injured. Videos and accounts of police brutality quickly spread over the Internet, particularly through social media. By June 13, tens of thousands of people were attending the MPL rallies. In São Paulo protestors paralyzed traffic by blocking major thoroughfares. 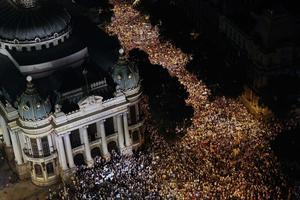 Four days later, word of the demonstrations spread through social media, and protests popped up in several other major cities, mostly led by movements focusing on public transportation grievances. In São Paulo and Rio de Janeiro these rallies grew dramatically in size, with 65,000 and 100,000 protesters, respectively. Subsequently, the mayors of both cities canceled the increase in the bus fare.

The mayors’ responses were not enough to halt the wave of unrest, however. In the following days, an increasing number of protesters took to the streets throughout the country. Neither MPL nor any other organized political group appeared to be at the helm of these protests. Although they still demanded cheaper and better public transportation, they were overshadowed by throngs of people holding posters and shouting slogans against all sorts of poor public services, the World Cup, and political corruption. Violence escalated with each march, ending with groups of protesters occupying public buildings, setting cars and busses on fire, clashing with police, and even looting stores and banks. Violent confrontation between groups of protesters also ensued, including right-wing groups assaulting people carrying party flags or wearing the colors and symbols of political parties. Skinheads, punks, neo-nazis, and people wearing nationalist symbols also engaged in violent behavior. Although a minority, these groups attracted a great deal of media attention.

On June 21, the MPL declared that it would be leaving the rallies because its leaders feared that the movement was being coopted by right-wing interests. One day later, however, it recanted, announcing new marches to demand better public health and education, and also the de-militarization of the state police force. The following day, President Dilma Rousseff went on national television to say that the wave of protest was welcome, that her government would negotiate with organized social movements, that she would sit with governors and mayors to try to build a coalition around improving public transportation, and that she would support earmarking all oil royalties for education. But Dilma did not stop there, three days later she proposed that an ad hoc constitutional assembly be elected to reform the political system and then be subject to a popular referendum for approval. This proposal was met with strong opposition from legal scholars and constitutional lawyers who declared the move unconstitutional. After consulting with the president of the National Lawyers Association (OAB), Dilma changed her position, and now presented the draft of a reform plan to Congress, so representatives and senators would elaborate on it and then submit it to a public referendum.

It is hard to deny that from the viewpoint of political institutions, Brazilian democracy has never been better. Elections are clean, regular, and well-organized. Results are almost never contested. The executive, legislative, and judiciary branches all exert their functions according to set norms and procedures. Even the political corruption scandals that have attracted much (selective) media attention, like the Mensalão scandal involving members of the Workers’ Party (PT), are almost always the product of investigations conducted by the Federal Police, which is under the executive branch. The fact that these illicit acts are investigated and publicized should be evidence of well-functioning institutions.

The economy is also doing well. Brazil is going through a prolonged period of full employment. The average income has been rising steadily along with the average family income. Public finances are also healthy. Despite some recent spikes mostly due to fluctuations in international commodity prices, inflation is also under control. There is a general sense that GDP growth is insufficient, but comparatively speaking, the growth rate has been better than most other economies worldwide. Finally, polls have shown that until the beginning of the demonstrations, Dilma’s popular support has been higher than any other previous president, including Lula.

Nonetheless, an uninformed person arriving in Brazil, upon reading mainstream newspapers such as Folha de São Paulo, O Estado de São Paulo, O Globo, or the weekly news magazines Veja and Época would get the impression that the country was immersed in a deep economic recession, plagued by high inflation, and that Brazil has an utterly corrupt, inefficient, and illegitimate political system led by malicious and incompetent radical-leftists. The level of anti-government, anti-Lula, and anti-PT militancy of these media organizations is noteworthy. This is probably the most persistent and significant problem of Brazil’s democracy nowadays: the concentration of big media organizations in the hands of five families, all on the same side of the political spectrum, who have relinquished the most basic standards of journalistic neutrality in order to oust the PT. Most of these families either had ties to or openly supported the repressive military dictatorship of 1964-1985. Investigations by the recently established Truth Commission in Brazil reveal that during the dictatorship Octavio Frias de Oliveira, the deceased patriarch of the Folha de São Paulo conglomerate, provided the military with vans for the transportation of prisoners and frequently visited the DOPS (Department of Social and Political Order), where political prisoners were held and tortured. Interestingly, the political attaché at the U.S. Consulate in São Paulo, Claris Halliwel, was also no stranger to the DOPS at that time.

The political agenda of the mainstream media has a strong impact on the middle class, which is their direct consumer. O Globo recently published a piece on its website boasting about the coincidence between the protesters’ grievances and its own headlines, all of them selectively critical of the Federal Government. In fact, most protestors do not seem to be motivated by party preferences.

Many have pointed to the rise of the Internet as an antidote to mainstream media’s control of information. Although not entirely false, this hypothesis does not take into consideration the fact that most of the information circulated online is produced by the same media conglomerates that dominate the print press and television. This is undoubtedly the case in Brazil.

The Brazilian alternative media is by and large composed of commentators interpreting information produced by the mainstream media who do not have the resources to independently produce news content. In other words, it is not a coincidence that protestors who joined the marches originally organized by the MP voiced slogans borrowed heavily from the mainstream media. They complain about practically all major public services as if government had been in a standstill during the last 10 years. There have also been concerns about the economy as a whole. They accuse the political system—political institutions, parties, and individual politicians—of being utterly corrupt. A few posters held by protesters call for Dilma to resign, while others call for the return of the military dictatorship. There are also other grievances voiced that are more narrowly focused or more radical.

It is clear that political corruption is a concern shared by many protesters. It is also clear that they frame it in a way consistent with that of the mainstream media: a conservative understanding of politics as something inherently dirty and dishonest. Thus they want to increase institutional and legal controls over political and administrative activities. Among other things, they see political parties as a problem. A recurrent slogan shouted in the streets was: “The people, united, need no parties.” In the midst of such widespread public mobilization, proposing a political reform through a referendum might lead to disaster—at least from the viewpoint of those who think there are progressive ways to improve democratic institutions in Brazil. The more conservative parties, such as the PSDB and the DEM, have advocated the adoption of majoritarian legislative elections, a model that would emulate the U.S. system. They also support the abolition of mandatory voting. The first measure would not only suffocate small parties, including the most progressive ones, but could also impede the election of representatives advocating progressive causes such as gay marriage, abortion, and the environment. Mandatory voting is crucial for the political inclusion of the poorer strata of Brazilian society. Making voting optional would contribute to restricting political participation to the more educated urban elites, not coincidentally the electorate of PSDB and DEM. In sum, there is no guarantee such measures would diminish political corruption. However, they are certainly palatable and simple ideas that might easily seduce an electorate thirsty for the blood of politicians. Dilma is convinced that something has to be done about the political system, and that the people want it done now. It is up to the ones who understand the democratic value of proportional representation and of mandatory voting to try to illuminate the debate that is now underway. If they fail, the unfortunate political consequences of such reforms will be borne by generations to come.