In late November, it appeared the right in Latin America might be taking the initiative, but the elections in Venezuela and Chile in December provided new momentum for the left-leaning governments and the ascent of post-neoliberal policies. Over the past decade and a half, the rise of the left has been inextricably tied to the electoral process. 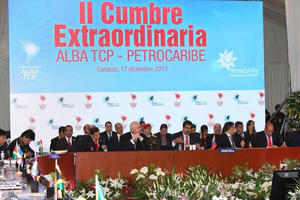 The elections in Venezuela and Chile in December provided new momentum for the left-leaning governments in Latin America and the ascent of post-neoliberal policies. Over the past decade and a half, the rise of the left has been inextricably tied to the electoral process. In Venezuela, Bolivia, and Ecuador, under the governments of Hugo Chavez, Evo Morales, and Rafael Correa, the electorate has gone to the polls on an average of once a year, voting on referendums, constituent assemblies as well as elections for national offices.

In late November, it appeared the right might be taking the initiative, as the oligarchy and the conservative political parties in Honduras backed by the United States used repression and the manipulation of balloting to keep control of the presidency. And in Venezuela, it was feared the right would come out on top in the December 8 municipal elections. After Maduro's narrow victory margin of 1.5% in the presidential elections in April, the opposition went on the offensive, declaring fraud and waging economic war. If the opposition coalition had won in the municipal elections, or even come close in the popular vote, it was poised to mount militant demonstrations to destabilize and topple the Maduro government. But the decisive victory of the United Socialist Party of Venezuela (PSUV) in the municipal elections gave a boost to the presidency of Nicolas Maduro, enabling him to advance the twenty-first century socialism of his predecessor, Hugo Chavez. The PSUV and allied parties won control of 72% of the municipalities and bested the opposition in the popular vote by 54% to 44%.

A class war is going on that is focused on the economy, particularly over who will control the revenue coming from its large petroleum resources that account for over 95% of the country's exports. With no new electoral challenge until the parliamentary elections in late 2015, Maduro now has the political space to take the initiative in dealing with the country's economic problems and to pursue a socialist agenda. As Maduro said on the night of the elections, “we are going to deepen the economic offensive to help the working class and protect the middle class....We're going in with guns blazing, keep an eye out.”

At the other end of the continent, Michele Bachelet one week later won a resounding victory in the Chilean presidential race with 62% of the vote. She has put forth an ambitious package of proposals that would increase corporate taxes from 20% to 25%, dramatically expand access to higher education, improve public health care and overhaul the 1980 Constitution imposed by the dictatorship of Augusto Pinochet. Chile has the highest level of income inequality among the Organization for Economic Cooperation and Development’s 34 member countries. Within her first hundred days, Bachelet has promised to draft legislation to increase tax revenues by about 3 percent of gross domestic product. On election night Bachelet proclaimed: "Chile has looked at itself, has looked at its path, its recent history, its wounds, its feats, its unfinished business and thus Chile has decided it is the time to start deep transformations," Bachelet proclaimed on election night." There is no question about it: profits can't be the motor behind education because education isn't merchandise and because dreams aren't a consumer good."

If these policies are implemented, they would shake the neoliberal paradigm that has been followed by every government since the Pinochet dictatorship, including Bachelet's during her first presidential term from 2006 to 2010. Like most presidential candidates before they take office, the actual changes may fall far short of what she is promising. But the student uprising and the resurgence of the social movements over the past four years has led to a popular movement in the streets that is unprecedented since the days of Pinochet. Militants on the left have already made it clear they will challenge her from the first day she takes office. According to Reuters, right after the election, hackers posted a message on the education ministry's website saying: "Ms. President we will take it upon ourselves to make things difficult for you. Next year will be a time of protests."

The elections in Venezuela and Chile also set the stage for a challenge to the latest U.S.-backed trade initiative, the Trans-Pacific Partnership, which includes a dozen Pacific rim nations. Ever since Chavez became president, Venezuela has led the way in opposing U.S. efforts to dominate hemispheric trade starting with the Free Trade Area of the Americas that George W. Bush launched in April, 2001. The FTAA was dealt a fatal blow at the 4th Summit of the Americas in Argentina in 2005 under the leadership of Chavez, Luiz Inacio Lula da Silva of Brazil, and Nestor Kirchner of Argentina, who advocated Latin American integration without the United States.

With the victory in the municipal elections behind him, Maduro was in a position to play a central roll ten days later in the second summit of ALBA, the Bolivarian Alliance for Our America (ALBA) and PetroCaribe, a bloc of 18 nations receiving oil at concessionary prices. (Five of the members are overlapping.) ALBA, founded in 2004 by Venezuela and Cuba, is based on the principal of “Fair Trade, not Free Trade.” Now including Bolivia, Ecuador, and Nicaragua as well as five more Caribbean nations, they met with the nations of PetroCaribe, a concessionary oil trading arrangement, to put forth a program to create a “special complementary economic zone” between the member countries of both groups to eradicate poverty in the region. Maduro proclaimed the economic zone “is a special plan...in order to continue advancing the food security and sovereignty of our peoples, and to share investments, experiences, and actions that promote [agricultural] development.” The action plan to implement the proposal includes cooperation with the UN Food and Agriculture Organization. An executive committee to coordinate the regional plan is being set up in Ecuador.

Maduro will take the document for the creation of a complementary economic zone to the January 31 meeting of Mercosur in Caracas “to advance in the great zone Mercosur-PetroCaribe-ALBA.” In all these economic and trade endeavors Venezuela plays a strategic geo-economic role. It is Latin America's largest oil producer, and it is located on the southern flank of the Caribbean Basin and on the northern end of South American continent. Venezuela is already a member of MercoSur along with Brazil, Argentina, Uruguay, and Paraguay, while Chile, Bolivia, Colombia, Guyana, Ecuador, Peru, and Suriname are associate members. As Bolivian president Evo Morales said at the conclusion of the ALBA-PetroCaribe summit, “We should never stop strengthening our integration, the integration of anti-imperialist countries.”

A key question is around the role that Chile, led by Bachelet, will play in the growing movement for Latin American integration. Under Bachelet's billionaire predecessor, Sebastian Pinera, Chile has been involved in setting up the U.S.-led Trans-Pacific Partnership (TPP), and is a founding member of the Pacific Alliance, a trade and investment group that includes Columbia, Peru, and Mexico. The United States has observer status.

Bachelet has given signs that a pursuit of these trade groupings alone is not in Chile's interest, and that she intends to breach the Pacific versus the Atlantic/Caribbean divide. Her campaign manifesto stated: "Chile has lost presence in the region, its relations with its neighbors are problematic, a commercial vision has been imposed on our Latin American links." She is particularly interested in closer relations with Brazil, where she identities with Dilma Rousseff, who also fo­rged her political identity as a young clandestine activist jailed and tortured under a repressive dictatorship. It is notable that in 2008 during her last presidential term, Bachelet convened an emergency session of UNASUR (the Union of South American Nations), to support Evo Morales against a right wing “civic coup” attempt that received direct material support from the U.S. embassy.

It is of course impossible to predict where Bachelet will wind up in the growing continental divide. Her commitment to the Pacific Alliance and to TPP may undermine domestic and international challenges to neoliberalism. The militancy of internal mobilizations to pressure her at every turn is critical. In Venezuela, Maduro faces daunting economic problems as he tries to bring inflation and the black market under control, while dealing with serious corruption problems in and outside of the government. However, the December municipal elections have opened up a space for Maduro to deal with these issues in the coming year, while playing a leadership role in advancing Latin American integration in opposition to U.S. initiatives.

Roger Burbach is the director of the Center for the Study of the Americas, and co-author with Michael Fox and Federico Fuentes of Latin America's Turbulent Transitions: The Future of Twenty-First Century Socialism. To order, see: www.futuresocialism.org