Facing Lula's legacy of having expanded social welfare while distancing the party from its popular support, will Dilma rebuild the trust of her bases? 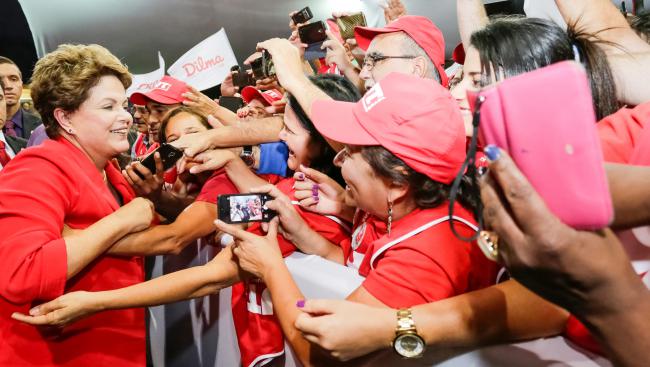 The outcome of the Brazilian presidential election of October 5 was much as it was predicted to be two months before. Because Dilma Rousseff, the incumbent, of the Workers Party (PT), won less than 50% of the vote, she will face Aécio Neves, of the Party of Brazilian Social Democracy (PSDB), in a runoff on October 26.

But there were many surprises in between. The election campaign was upended several times. Until 16 months ago, Dilma's reelection was taken for granted. (The two candidates, like most politicians in Brazil, are always referred to just by their first names. Here we will follow the Brazilian example.) But the urban uprising of June 2013 revealed a level of popular discontent that had gone unrecognized. Protest was predicted to burst out again when the World Cup competition was played there in June and July, but turned out to be muted in soccer-mad Brazil, even when the national team suffered an ignominious defeat, 7-1, against Germany in the semifinals.

Then, less than two months before the election, the third-ranked candidate, Eduardo Campos of the Brazilian Socialist Party (PSB), died in a plane crash, and his place at the top of the ticket was taken by his running mate, Marina Silva. Marina, who was much better known and more popular than Campos, surged to second place in the polls and appeared to have a real chance of defeating Dilma in a runoff. But in the days before the election, Marina's support collapsed. In the final tally, Dilma won 42%, Aécio 34%, and Marina 21%.

The runoff now sets up a clear choice between the two candidates whose views and programs are most polarized, and the two parties that have dominated presidential politics for the last twenty years. As president, Dilma has extended the progress the previous PT administration made in social welfare, active economic intervention, and national independence. Aécio and the PSDB, on the other hand, promise a return to past free-market policies and willing subordination to the dictates of the United States. The election is being avidly watched by the right wing throughout the hemisphere, eager to see signs of ebbing of the "pink tide" that brought progressive governments into several countries of the region in the last decade and a half.

Dilma is heir of PT President Luiz Inácio Lula da Silva (2003-2010). Lula was the leading figure of the leftist PT, but pulled it to the center to win in 2002 with promises of fiscal responsibility and fulfillment of obligations to international financial institutions. Nevertheless, his administration greatly expanded the country's social welfare programs, notably Bolsa Família (family stipend), a conditional cash transfer program that gives poor families a cash payment in exchange for their keeping their children in school and getting them a (free) medical checkup every year. Each grant is small—generally less than $100 a month—but it provides a substantial supplement to the quarter of the country's population that receives it.

Helped along by a prosperous economy (Brazil escaped the worst effects of the U.S.-induced recession of 2008) and increases in the minimum wage and pensions, the poverty rate fell from 35.8% to 21.4% between 2003 and 2009, according to the World Bank, though inequality as measured by the Gini index still remains very high. Nevertheless the poor benefited more than others from the growing economy and the government's programs, which included housing construction subsidies, countrywide electrification, and expansion of educational opportunities. Lula was called the most popular president in Brazilian history and finished his second term with approval ratings over 80% (See NACLA Report, March-April 2011).

Lula also promoted hemispheric solidarity over an alliance with the United States. But at the same time, his administration favored segments of the capitalist class, especially agribusiness and the new Brazilian multinationals, supported by active economic intervention through the national development bank. He did not enact the agrarian reform that was an important promise in the PT's historical program. He presided over the transformation of the PT into an electoral party that downplayed the active mobilization of its supporters, distancing the popular president from the party's base—something that may come back to haunt Dilma in her bid to win a second round election and to govern if she is re-elected.

Dilma was relatively unknown when she was tapped by Lula to be his successor. At first she inherited much of his popularity and not only maintained his program, but also extended it. She proclaimed that she would bring about a "Brazil Without Misery" by pulling up everyone living in extreme poverty. She has not met her target, but the poverty rate continued to fall, reaching 15.9% in 2012. Payments under Bolsa Famíília increased by 25% between 2010 and 2012. The real minimum wage was increased significantly in both 2012 and 2013. Informal-sector employment continued to drop along with unemployment, which reached a historically low level of 5%, despite a slowing of the economy.

Her last assignment under Lula had been to lead the Growth Acceleration Program to invest in public infrastructure through the national development bank. During her presidency its disbursements fell slightly in the first year but then rose again in 2012 and 2013. She also follows Lula in strengthening the regional alliance independent of the United States. She canceled a scheduled meeting with Obama in Washington in protest against the NSA's tapping of her phone, and in a speech at the UN last month, emphasized that military interventions should require strict adherence to the UN Charter.

But a slowing economy and her own restrained personality (which contrasts sharply with Lula's charisma and does not televise well), contributed to a generalized discontent that broke out in a massive popular uprising that swept the country's cities for three weeks in June and July of last year. Sparked by an increase in bus fares, it attracted a heterogeneous set of followers. Millions came out to demonstrations almost nightly in more than 300 cities and towns, bringing forth a convergence of "right" and "left" positions. Some protested inadequate public services and corruption and called for "political reform," which had different meanings for those of different political views. Others demonstrated for gay rights and the legalization of marijuana, and against police brutality.

Dilma's vacillation and brutal police repression of the marchers further alienated the protesters. Though the protesters expressed diverse and even contradictory complaints, all of them demonstrated a broad dissatisfaction that came to be focused on the incumbents: Dilma and the PT, distant from the people after 12 years in office. It was as if many people became aware of their own discontent when the marches showed how widespread it was.

Marina, born to an extremely poor black family in the Amazon, worked as a rubber tapper and grew up as a devout Catholic follower of liberation theology and militant of the PT. She was elected senator and then became Minister of the Environment in Lula's cabinet. She won an international reputation as an environmentalist, defending the Amazon rain forest. But she resigned as minister in 2008, after losing battles within the administration against GMOs and development projects in the Amazon.

In 2010 she ran for president against Dilma on the Green Party ticket and won a surprising 19% of the vote. Soon afterward she split from the Greens and formed a new party, the Sustainability Network. But the party's registration was rejected by the election authorities for lack of sufficient signatures, so she joined Campos' ticket as vice-presidential candidate in a marriage of convenience. Earlier she had converted from Catholicism to the Assembly of God. She opposes abortion and same-sex marriage; after her elevation to presidential candidate, she repudiated the PSB's plank favoring same-sex marriage. Her voters in 2010 were a mixture of leftist environmentalists and rightist evangelicals—the latter, an increasingly strong presence in Brazilian Congress.

Once she ascended to the top of her ticket, Marina seemed best positioned to benefit from this popular discontent. From her environmentalist past she retains a progressive image; she promised a "new politics" of "change," both ill defined but resonating with the demands for political reform. But on closer examination the change she promised sounded more like a return to the pre-PT past, with the same free-market policies that prevailed under the PSDB before 2002: fiscal responsibility, a reduction in government expenditures, promotion of agribusiness, and closer relations to the United States. Dilma attacked her unremittingly during the last weeks of the campaign, but as she fell in the polls, her supporters evidently turned to Aécio rather than Dilma. Marina has now endorsed Aécio after he made pledges regarding environmental protection, agrarian reform, and demarcation of indigenous reserves, among other things—positions designed to appeal to left-leaning voters without touching on the fundamental economic model.

Without Marina's image of newness, Aécio offers the same program: conservative economic policies of privatization, independence of the central bank from the president, and closer commercial and political ties with the United States and Europe. He will try to capitalize on the accusations of corruption in the nationally owned Petrobras oil company. Though corruption has a storied history in Brazil—some of Lula's closest advisers were convicted of bribing congress members for their votes—the issue has never gained much traction among the poor voters who make up the bulk of the PT electorate.

Dilma, on the other hand, will continue vigorous state intervention in the economy, social programs, and Brazil's regional leadership and independence of U.S. hegemony. She hopes to capitalize on the support of Brazil's still numerous poor—bulwarks of the vote for Lula in 2006 and for herself four years ago. But to win she will have to attract an appreciable share of Marina's voters, along with those who voted for leftist candidates—many of them former supporters of the PT who became disenchanted with the party's economic moderation and the demobilization of its supporters.

If she is re-elected, Dilma will have a hard time governing. The PT and the Party of the Brazilian Democratic Movement (PMDB), the two largest parties in her governing coalition in congress, lost a total of 23 seats in the congressional election that was held simultaneously with the first presidential round. To govern effectively and continue to implement her program, she will have to call out her base to mobilize behind her.

John L. Hammond is a member of the editorial committee of NACLA and edited the report on Lula’s legacy in the March-April 2011 issue. He is the author of Fighting to Learn: Popular Education and Guerrilla War in El Salvador and Building Popular Power: Workers’ and Neighborhood Commissions in the Portuguese Revolution.  He teaches sociology at Hunter College and the Graduate Center, CUNY.