Ayotzinapa Demands Justice One Month After the Disappearances

Friends and family members of Ayotzinapa's recently disappeared youth continue to expose the bloody realities at the core of Guerrero politics.

NACLA partnered with Subversiones.org to translate their reporting of the growing resistance movement in Ayotzinapa. 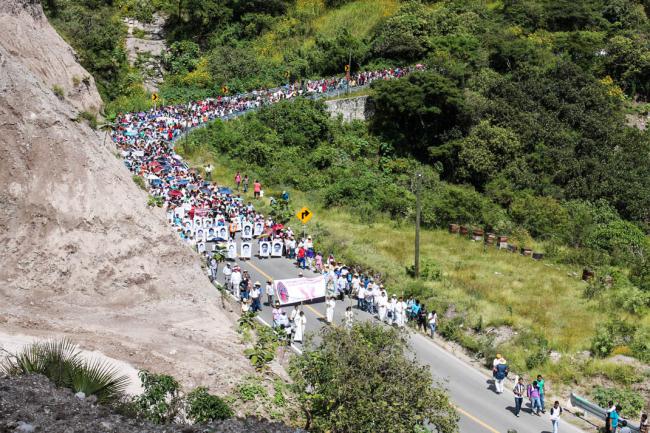 Nayeli is 24, and her son is five. Her town is an hour away from Tixtla, where her husband is a student at the Ayotzinapa Normal School. Sitting in the bus that takes us back to Chilpancingo after countless protests, Nayeli spends most of the 40-minute trip answering her son’s questions in a low, quavering voice: Will walking for three hours in the sun mean his father’s classmates will return? Will they be able to go back to school in Tixtla afterwards? Is she sure the same thing won’t happen to his own father?

In response to the last question, she says nothing and embraces her son. She wishes she could be sure, but she knows she can’t. That is why, even though her husband was not one of the 43 disappeared, she marched on October 24 in what was the third pilgrimage from Tixtla to Chilpancingo in Guerrero state history.

The students tell us that the first protest occurred in the late 1960s, when Lucio Cabañas led students from the Autonomous University of Guerrero. The second took place last March during protests against education reform, when the teacher’s movement mobilized alongside members of the Regional Coordinator of Community Authorities, while federal helicopters watched from above. The discovery of a man who had been chopped to pieces interrupted the proceedings and ended with threats from the army. The only interruptions at the October 24 march took the form of solidarity stops, where volunteers gathered to distribute water and fruit to participants. For the first time in the state’s history, law enforcement did not try to stop them.

Around the middle of the journey, news of Governor Ángel Aguirre’s resignation reached the marchers. When they arrived in Chilpancingo, a press conference at 5 PM at the state governor’s house, Casa Guerrero, confirmed the news: Aguirre had requested a license change allowing the local congress to choose a new governor and resume investigations around the tragic events that occurred in Iguala on September 26. “I won’t let the center of all this be about whether the governor stays or not. I won’t be an impediment to the progress of the investigation,” the politician presumptuously declared. 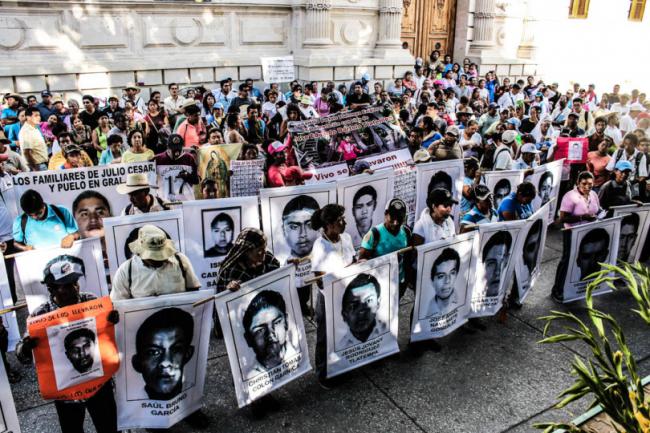 Upon hearing the words of the now ex-governor, it became clear why none of the march’s participants—not even the families of the victims—thought of attending the speech. Instead, they remained in the town square where they held a vigil for the students, followed by a political event featuring a youth who had escaped the massacre and the voices of the mothers of the disappeared.

The two parallel events that were carried out that afternoon in Chilpancingo are a striking demonstration of how far Mexican politics have strayed from real life in the country. At one end of the city, the ex-governor’s declarations echoed hollowly, while on the other end, almost simultaneously, we heard accusations by those who have spent years suffering from the state’s bloody reality. 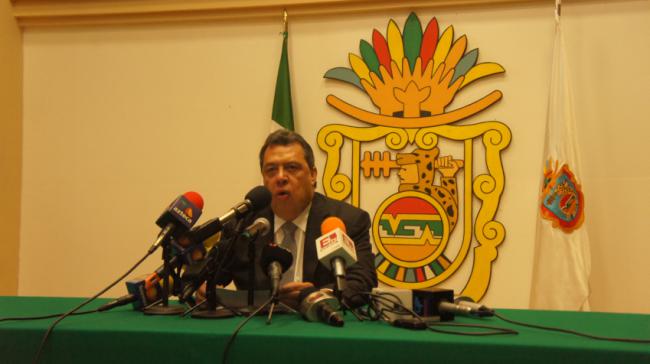 Meanwhile, Aguirre claimed that “in the hours after the disappearance, the state government took immediate measures to detain the police and other individuals identified as participants directly implicated in these criminal acts.”

One of the teachers in charge of the Ayotzinapa Normal School collection center located in the city center spoke to us about how prosecutors took days before deciding to look for the students, and that almost two weeks passed before the president would define the young people’s disappearance a national and not merely local problem. The accusations against Aguirre by a member of the Committee for the Families and Friends of the Arrested, Disappeared, and Murdered of Guerrero continued, while Aguirre claimed that the government had been immediately on top of “diffusing information and collecting supplies, in order to find the disappeared students and call necessary attention to the victims.”

The teacher explained, “There is no help, there is no assistance. We put together our own consultation brigades as much as we could, but it’s not enough. Going to the school helps, whether to visit Committee members or the families, because it builds empathy between people who are going through the same thing.”

The Committee has been working to assist the victims’ family members and friends since the beginning. They have denounced forced disappearances for years, and their advocacy continues as they act on behalf of the 43. In March 2007, they denounced the disappearance of the architect Jorge Gabriel Cerón Silva, as well as the disappearances of Francis Alejandro García Orozco, Andrés Antonio Orduña Vázquez, Lenin Bladimir Pita Barrera, Zósimo Tadeo Chacón Jiménez, Olimpo Hernández Villa, and Sergio Ménez Landa, all of which occurred on March 1, 2010. The abduction of these six young people—arrested by the Mexican military while at work moving furniture from a fair to Cherry’s dance club in Iguala—had been until now the largest number of people abducted at one time.

The teacher believes that if society does not react immediately, pushing for every means possible for restitution of the 43, then soon such abductions will reach increasingly massive proportions. “Many people are outraged seeing others protest by breaking windows and taking over City Hall, but what are they waiting for? Parents, family members, and friends want to find their loved ones and they’re doing what they must to put pressure on the situation. In this case, for example, we don’t get any news and can’t just sit waiting silently by the television for information,” the teacher said pointedly. Because now the information comes from the media, and not the authorities.

The discussion around information provided to the families is a very important part of the denunciation by the Committee members, who consider this institutionalized silence an enormous lack of respect towards the disappeared and towards their families.

“We are very much committed to the victims’ rights to uncover information about their loved ones through the appropriate means, that is, the authorities. In the majority of situations, families are finding out what’s going on through what the television or press says, and that is inhumane treatment,” shared our teacher and activist compañera from the collection center.

She then shed light on the controversial stance that Priest Alejandro Solalinde, the well-known migrant activist, has taken in this struggle:

“It pains us that this treatment has also come from Father Alejandro Solalinde, whose words are not very comforting. We respect the father’s struggle, as he has dedicated himself to the defense of human rights, but on this occasion we feel that he said something publicly that was not consistent with what was actually said to him. The families are hopeful that they will find the disappeared alive, but he has taken away that hope by saying that the boys were killed or even burned alive. If the father had information, the best path would have been to go to the university, talk with the parents and the students and try to figure out a collaborative strategy.

In the face of such declarations, it is understandable why Aguirre’s words sound like a joke to so many people. Listening to the politician talk about the priority to continue searching for the disappeared and to punish those responsible, our source recalls how “it was up to us to be there the day the first graves were discovered, and the federals and the army didn’t even have a strategy, they never came together. The parents had to lead the search.” 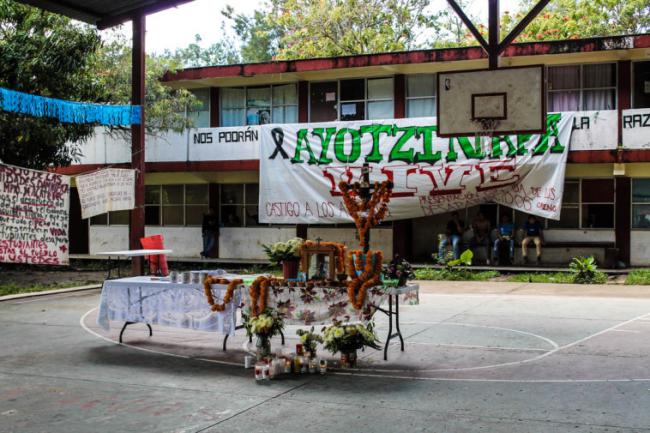 It is worth noting that while the teacher discussed Aguirre’s resignation speech with us point-by-point, the activities around her did not cease. The teachers in solidarity who “invaded” the town square with tents on October 8—after the first national march in support of Ayotzinapa—continued and continue to distribute informational materials and collect funds for the school. Townspeople voluntarily cooperate to distribute videos, posters, flyers, and stickers in support of the cause.

The official speech in Casa Guerrero was nearly over, and when Aguirre stopped to give thanks to “the solidarity of PRD, PT, and MC, the parties who supported [his] government bid,” the teacher could not contain her anger.

“It is not true that those are the parties who supported the candidates. Here, the narcos decide who maintains political authority. Everybody knows it, and what happened at the Normal School made it very evident—it confirmed and reaffirmed our complete sewer of a political system. It’s like when they killed Arturo Hernández Cardona last year in Iguala, and there was a witness who said that it was the municipal president himself who gave him the final shot.

We see two things here. First, that the governor didn’t have the moral character to come out and say, ‘there they are, alive or dead.’ And the president of the republic even less so. Secondly, here in the state the Autonomous University of Guerrero has been notably absent. The day before yesterday, they finally came to the Normal School in support, and they participated in the pilgrimage. So now we want to know: what will happen with their rector? During the protests on October 2 and 8, he had suspended classes, as if he didn’t want the students to go to the protests. And now they are congregating. If the governor is leaving, he [the rector] could be a candidate for the interim government and help neutralize the mobilization.”

This reflection sounds to us like déjà-vu. In June of this year Salvador Jara Guerrero, ex-rector of the University Nacolaita, was sworn in as a substitute governor in Michoacán, relieving Fausto Vallejo Figueroa. If the teacher’s prediction is correct, then we will perhaps find ourselves facing a new tendency whose success is still to be determined. However, looking at how the scene in Michoacán has unfolded, the results don’t promise anything positive.

Our conversation with the teacher ended around the same time that Aguirre’s conference ended on the other side of Guerrero’s capital. The buses that would take us back to Tixtla awaited us a few blocks away. Nayeli and her son were already seated inside them.

Eréndira Martínez is an independent journalist and photographer and member of Agencia Subversiones (Subversions Agency). This article originally appeared on Subversiones.org (CC BY-NC 2.0 México, 2014) on October 24, 2014. Translated by Laura Weiss.