This article is a joint-publication of NACLA and edmorales.net. Translated from the original Spanish version that appeared in 80grados.net. 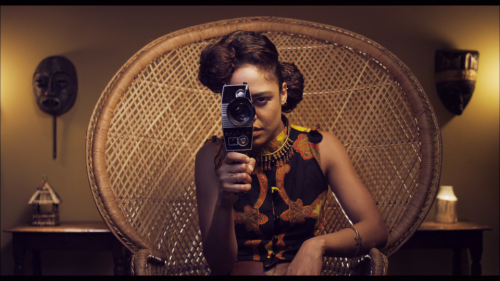 There is a moment in Dear White People, a film that is drawing a lot of attention for its frank treatment of “post-racial” America—particularly in Ivy League universities—that made me laugh, although I felt not many in the theater got the joke the way I did.  It was during a voiceover dialog during which the protagonist Sam’s African-American suitor was musing that he thought at first that she was “Puerto Rican” because of her lighter skin and superior attitude. Sam is a mixed-race filmmaker and agitator who is constantly angry over “micro-aggressions” she endures every day on campus, and is determined to put the brakes on all forms of neo-racism, period.

The first time I’d ever heard of Dear White People was last spring in the class I teach at the Center for the Study of Ethnicity and Race at Columbia University. One of my students, daughter of self-aware LA Chicanos, had seen its debut at the Tribeca Film Festival. She’d written her weekly response paper about the experience of seeing the film and returning to her dorm and encountering her Latino friend, whom she said didn’t understand Sam’s fixation on race matters. “'What a racist title,’ he said,” wrote my student about her friend’s “post-racial” reaction to Dear White People. “He’s the whitest Dominican you’d ever meet,” she continued. “He doesn’t speak Spanish, and he thinks people of color can be racist.”

In the film, Sam calmly explains that racism is a system of power and privilege that imposes prejudice on racialized inferiors and since people of color can’t benefit from that system, their opinions and prejudices cannot be considered “racist.” This is a logic that has been used for 30 or 40 years now, but is often obscured in the dominant discourse because current “common sense” holds that the system no longer privileges white people. Isn’t it clear, says this narrative, that with Barack Obama’s election the old age of racism has ended?

Well, no, no, and no, says the screenplay for Dear White People, the impressive debut of the auteur Justin Simien, who can be imagined as a Spike Lee who suffered through four years of Harvard or Yale instead of Howard, that most revered bastion of black colleges. Although the film has a little influence from Lee’s School Daze it also has a touch of the experimental film Born in Flames by the feminist director Lizzie Borden. What’s more, Simien has more advanced ideas about postmodern “white guilt” than Lee, as well as the intersection between queer politics and race politics, and the dilemmas faced by the children of mixed marriages. In fact the aforementioned moment when Sam is compared to a Puerto Rican reveals a bit about the social and racial reality of being Boricua.

In an Ivy League university a mulata is an exotic character, charged with a social and sexual ambivalence that is hard to resolve in quotidian campus interactions. Sam, reflecting on this, suffered the crisis of being accompanied by her white father to grade school when she was a child–the desire to separate herself to avoid confusion that resulted from noticing how people looked at her curiously–what is that white man doing with that black girl?  Other scenes find Sam grappling with being an object of sexual desire and political solidarity with white and black lovers, with all of this seemingly just adding to her quiet agony.

In Puerto Rico and other Caribbean nations, the position of the mulata is a little more mainstream, but this is part of an illusion created to establish a mixed-race national identity without confronting the still present problems of racism and sexism in post-colonial societies. It would be interesting if someone would dare to shoot a version of Dear White People set in Puerto Rico, Cuba, the Dominican Republic, Venezuela, or Colombia. What micro-aggressions would be complained about? Would they be similar to those experienced in the United States or substantially different? Which would be more painful to contemplate?

This essay written Melissa M. Valle tells of micro-aggressions she has experienced as an Afro-Latina in countries like Colombia and Ecuador. Attitudes that say that being a mulata is a condition that can be fixed with a marriage to a lighter-skinned man. It is a belief that Afro-Latin@s, are in a temporary bind that in the future can be corrected if they hope to attain the Latin American ideal of becoming mestizo, or some people say, an honorary white person.

“Bring up racism amongst those from Latin America and you’ll often get an exasperated groan, followed by something about how class is the predominate stratifying principle in Latin America,” writes Valle. “They will likely bring up the fluidity of racial boundaries as a way of suggesting that the struggles around this form of discrimination have their own set of particularities when in a different setting like Latin America, and that these particularities absolve them from dealing with contradictory experiences of Afro-Latin@s that reveal a peculiarly hidden racism.”

Word. We need to see many more versions of Dear White People, until we no longer have the need to speak about the hidden race issues of “our” América.

Ed Morales is a freelance journalist and author of Living in Spanglish (St. Martin’s Press). He teaches at Columbia University’s Center for the Study of Ethnicity and Race, and is a NACLA contributing editor.