Mexico’s human rights crisis must be understood within the context of delayed and incomplete democratization. 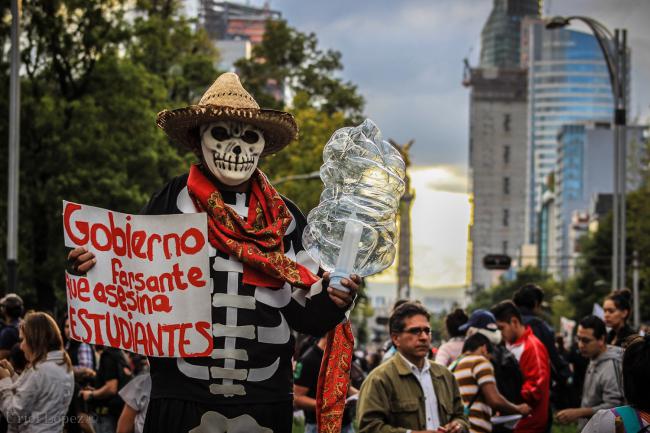 Mexico’s human rights crisis, triggered by the disappearence of 43 teachers-college students in Ayotzinapa, Guerrero, along with the extra-judicial killing of at least eight suspected kidnappers—already in custody—at the hands of the military in Tlatlaya, State of México, must be understood against a political and institutional background of delayed and incomplete democratization.

At the federal level the political system that emerged from the 2000 election can be catalogued, formally and in broad strokes, as a polyarchy; even if we take account important differences in dimensions like the electoral sphere and the internal life of the parties. Its principal actors frequently operate in an oligarchic manner. Its parties follow a parallel process of capturing and defining the national political agenda, restricting its demands and citizen participation, and of indifference to its political programs. The Pact for Mexico, the political instrument designed by the PRI on its return to the presidency in 2012 to carry out its initiatives of structural economic reforms, has relegated the PAN and the PRD, both weakened internally, to the role of subordinate partners.

We are seeing, at the federal level, not a classic authoritarianism—there is no ideology of the state here, no political police or total suspension of criticism and dissent—but rather a limited pluralism and a low-quality democracy. Nevertheless, if we shift our gaze to the national setting, we see political regimes that oscillate between delegative democracy—with all-powerful governors imposing the model of political life—and pure and hard expressions of authoritarianism, with its quota of repression and the use of violence, little different from the old order. Among many regional and local governing bodies, political alternation and civic modes of exercising power stand out for their absence.

The socioeconomic background of this political order is three decades of neoliberal policies and the withdrawal of the state from its social responsibilities, yielding a management of public policies that is neither efficient nor inclusionary. With a paltry annual growth rate that has averaged about 3% over the past three decades, a tax collection of barely 11% of GDP, public investment of under 6% of GDP, a workforce with low qualifications, weakened unions, massive informality taking in about 60% of all workers, and wages insufficient to cover basic necessities, Mexico is a country in which the very minimum of a welfare state—universal access to adequate social services and security—simply does not exist. It is a country where poverty and extended inequality have become the broth that cultivates violence and corruption.

According to a study of the Center for Private Sector Economics, in 2012 political corruption in Mexico implied private profits of about 74 billion U.S. dollars, to which must be added high criminal impunity and a criminalization of the very poorest. On top of all this, from 2006 until now, official figures register 80,000 people killed and 22,000 disappeared, which amount to a human rights crisis of major proportions.

This context acquires aggravated forms in the situation of conflict and crime that shakes certain areas of the country. In states like Guerrero, Michoacán, and Tamaulipas, organized crime has broadened its universe of activities and strategies. It has expanded from drug trafficking to the clandestine extraction of hydrocarbons and kidnapping for ransom, arriving at the direct control of local police forces, treasuries, and databases. Business people, taxpayers, and citizens in general are helpless facing this form of lumpenpolitics. By way of bribery, extortion, and murder of rival candidates, inconvenient functionaries, and insubordinate social leaders—from 2009 through 2013, 1,200 such people were assassinated in various municipalities—organized crime has gained control of the local political dynamic, installing its own mayors in wide swaths of Mexican territory.

To achieve all this, it required a weak and terrorized society, so that in areas where traditions of social organization and mobilization existed—including the student movement and community police of Guerrero—its mission has been to weaken social organization and spread the message among the citizenry of the high costs of disobeying political/criminal power.

We now live under new expressions of state terrorism far from the traditional logic marked by the global conflict—political and ideological—of the Cold War. Today’s state terrorism doesn’t seek to defeat communist guerrillas or worker or campesino movements committed to revolution; rather, it seeks to impose the criminal privatization of the state, the monopoly market of illicit goods and services, and to impose social anomie as a mode of existence and behavior in an uncivil and disarticulated society.

In this violation of human rights, elements of organized crime have cooperated with police forces and organs of law enforcement at the local and regional level. In Guerrero in particular, this perverse marriage takes place within a long history of impunity and repression of the local political class, cemented during the epoch of PRIista hegemony that has survived up to the present. For its part, the State of Mexico, one of the entities of clear PRI dominance—along with Veracruz, Hidalgo and Coahuila—presents us with iconic cases of impunity linked to the political family of Mexico’s current president, the former governor of the state. This shows how the flagrant and massive violation of human rights under which Mexico is now living brings together, in a hellish marriage, historical factors—authoritarian political actors and methods of the old politics—with the emergent criminal lumpen politics, under the official myth of a progressive and modernizing country.

The crisis of institutional credibility generated by this conjuncture is profound and requires the urgent attention of the Mexican political class. It moved, during the presidency of Felipe Calderón, from the failed calls to confront the situation of the country’s insecurity by way of the militarization of the war on organized crime—calls debunked by the discourse of the Movement for Peace with Justice and Dignity headed by Javier Sicilia and by the SOS of Alejandro Martí—to a direct signal that “it was the state” in the massacres of Tlatlaya and Iguala. It doesn’t matter that there are differences between the criminal takeover of local government, the complicity of state governments, and the willful omission of the federal order: for the victims—and their mourners—the political class appears, without distinguishing the political colors and institutional anchors, as responsible for the abuse.

In this scenario citizen mobilizations, headed by students, are growing in number, regularity and the intensity of its demands. León, Guanajuato; Cuernavaca, Morelos; and the Federal District itself are examples of cities where several organizations have mobilized, weaving together repudiation of the student disappearances with the broader crisis of insecurity. Responding to these mobilizations the country’s attorney general has characterized the cases of Tlatlaya and Ayotzinapa as isolated events, refusing to link them to the structures of power any higher than the lowest ranks of the military for the first case, and the municipal president of Iguala in the second. The cover-up speech of the governor of the State of Mexico following the events in Tlatlaya, and the slow and insufficient response of the governor of Guerrero following the first executions of opponents of Mayor José Luis Abarca, triggered the demands by the affected families, as well as national and international social organizations, for fuller responses and some indication that the state would take steps to repair the injustice and restore its legitimacy.

With the responses given by the authorities up to the present—seven soldiers arrested in the Tlatlaya case; 59 detained, including the former mayor of Iguala and his wife, María de los Angeles Pineda, in Iguala—the federal government has tried to manage the conflict and begin to prepare for the elections of 2015, in which all the seats in the lower chamber of Congress will be up for renewal. It wants to bring these episodes to a close as quickly as possible.

The governmental strategy is betting on a discourse that centers on effectiveness, with which it achieved the so-called structural reforms on which it campaigned for the presidency, and which it hopes will be seen as its principal weapon in overcoming the crisis of legitimacy. But the unfortunate “I’m tired of this,” expressed by Attorney General Murillo Karam in his press conference of November 7 —in which the probable deaths of the disappeared students was announced—has become a slogan of an exasperated citizenry on social media (#YaMeCansé) and in street mobilizations.

Sadly, the crisis is deep and prolonged, overtaking the responsibility of the traditional political actors. This time all have been implicated, whether for their actions or their omissions. They appear to repeat the warnings expressed in 1947 by Cosio Villegas, under an identical title as that which appears above these words; the country is adrift, losing precious time for the immediate egoism of its elites. There exists a challenge to repair a torn social fabric and to reconstruct democratic institutions and confidence. It is not only Tlatlaya and Iguala, but dozens of cases over the past eight years in which deaths and disappearances are yet to be resolved.

Mexican society continues to put little trust in its representatives and effectively lacks the institutional mechanisms and instruments to channel its discontent and demand its rights. The National Commission on Human Rights, like never before in its over two decades of existence, finds itself marked in its work by the vices of omission and partiality. Recently, several social organizations, experts and victims of human rights violations—like members of the June 5 Movement for Justice, composed of parents of the victims of the ABC Daycare Center killings—came together to petition Congress for a political judgment against the current ombudsman, Raúl Plascencia.

Civil society has to articulate its proposals and mobilizations around a common program that obligates the political class to recognize citizen demands. This is the sine qua non for the establishment of the foundations of a genuine—as yet nonexistent—state of laws. Among these lines of action, already identified by Mexican academics and activists, must be the end of politicians’ immunity from prosecution; the effective autonomy and professionalization of the judicial power; the deep reform of the country’s police forces—with a sole command and instances of monitoring by social organizations and academic specialists; and the end of the parties’ political colonization of the autonomous electoral institutes.

In the local realm—of Guerrero and other areas of conflict and criminal activity—civil organizations and human rights groups should advise and accompany aggrieved communities. Formulas created by the communities to confront crime, like community policing, should be inserted into a coherent inter-institutional and inter-sectorial strategy. The shameful debt of poverty and inequality must be fought not with client-based programs but with strategies that can structurally resolve the situation. Finally, more than one functionary, at all levels of the state, should resign out of simple decency.

The resolution of the current crisis does not lie, as a reformist sector of the elites believes, in a cosmetic redesign of institutions. Nor does it lie in a conspiratorial and sectarian vision of an old left and its spokespeople. It must be articulated within a new democratic movement, non-violent protest and political dialogue, demands on the state, and better organization and accompaniment of actual and potential victims.

Armando Chaguaceda and Alex Caldera are political scientists at the León Campus of the University of Guanajuato. The original Spanish-language article was published in the weekly Newsweek en Español. Translated by NACLA and reprinted with permission.