Intense public demonstrations that have erupted in Mexico and the United States reveal links in movements against police violence and impunity.

NACLA teamed up with Radio Bilingüe to translate their coverage of protests surrounding police impunity in Mexico and the United States. Listen to the original podcast here. 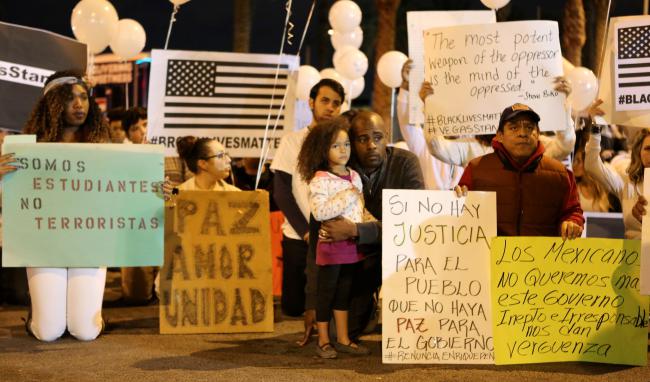 This is the weekly edition of Noticiero Latino. I am your host, Chelis López, bringing you this week’s topics. Protests erupt in Mexico and the United States against police impunity.

Let’s begin: Intense public demonstrations have erupted in Mexico and the United States in protest against police violence and impunity. In Mexico, the protests have demanded justice for the students who disappeared after being detained by the police. In the United States, mobilizations have been a reaction to the recent deaths of young African American men at the hands of police agents. This week, protesters from 43 states of the United States took to the streets to demand that Obama and the congress withdraw funding from Mexican security forces. In New York, the mobilization for the Mexican case occurred at the same time as protests for the case of Eric Garner, an African American man who was killed when a police officer put him in a choke hold forbidden by protocol. Marco Vinicio González reports from the streets of New York.

Roberto Lovato: “We are here to send President Obama a message: Your party is over. Our military assistance is turning Mexico into a mass grave.”

With the Federal Building of Manhattan as background, activist Roberto Lovato addressed a large audience this Wednesday—flustered by the rain and cold— as he spoke of mobilization in more than 40 states against Mexico’s state violence. This international movement detonated when 43 normalistas were kidnapped from Ayotzinapa in Iguala, Guerrero two months ago. These students remain missing.

Roberto Lovato: “The shroud of darkness in which U.S. policy has been directed towards Mexico, a policy responsible for more than 25,000 disappeared people, a policy that has helped to have 100,000 dead in Mexico… those exchanges are now over.”

The movement founded by Lovato and USTired2 made five thousand requests to withdraw funding from Mexican security forces. These petitions are sustained by Senator Patrick Leahy’s law which forbids the Department of State and the Department of Defense to deliver military assistance to any foreign government suspected of violating human rights. USTired2 has also facilitated efforts to weave bridges of solidarity between the two countries.

Juan Carlos Ruiz “Last night we had a dialogue between families from Ayotzinapa and the organizers, families and women of Ferguson.”

Juan Carlos Ruiz, member of the New Sanctuary Movement and New York coordinator of USTired2, refers to the meeting between the families of Ayotzinapa normalistas and families from Ferguson, Missouri, where a young African American was killed by a white police man, in the following manner:

Ruiz says the dialogue was powerful. The women of Ferguson argued that every 28 hours a police man kills a person of color in the United States.

Juan Carlos Ruiz: “African American men, women, young people mostly, are killed with impunity in our streets. There is a racist culture in our police corps… We have agreed to continue working together, building bridges of solidarity, having more dialogues in the future.”

One of the mobilizations around the Mexican case occurred in Times Square at the same time as people protested the cases of Michael Brown from Ferguson and Eric Garner from New York. In both cases the jury decided to exonerate the responsible police agents.

A young man called Amir Brown went to Times Square to protest what he deemed an injustice in the case of Eric Garner.

Yara Palin, a student at Lehman College expressed her frustration and weariness in the face of so many recent episodes of violence in Mexico and the United States.

Yara Palin: “People are tired... people can’t take more abuse, or injustice... There is no hatred for authority, the policy, or the government. One would like to work with them. One would like for them to show the kind of respect they ask of others.”

The city’s mayor, Bill de Blasio, announced this Wednesday that the police department has purchased 54 body cameras to be used by police in the five boroughs. President Obama has asked Congress for 263 million dollars for police training. 75 million of this amount would be spent on body cameras.

For Noticiero Latino, weekly edition, from New York, this is Marco Vinicio Gonzales. This concludes our weekly edition of Noticiero Latino, a Radio Bilingüe production from its studios in Fresno and Oakland, California. With partial endorsement from the Corporation for Public Diffusion and the California Endowment. News Director: Samuel Orozco. Producer: Zaidee Staveley. Associate producer: Esmeralda Cisneros. Technical producer: Rubén Tapia. Technical conductor: Jorge Ramírez. Production assistant: María de Jesús Gómez. I am Chelis López. Call us with your commentaries on 1-800-345-4632 or write us to www.radiobilingue.org. You have listened to Noticiero Latino. Satellite: Radio Bilingüe.