Why USAID Could Never Spark a Hip Hop Revolution in Cuba

Any attempt to engineer a U.S.-affiliated movement from above is destined to be revealed for the farce that it is. 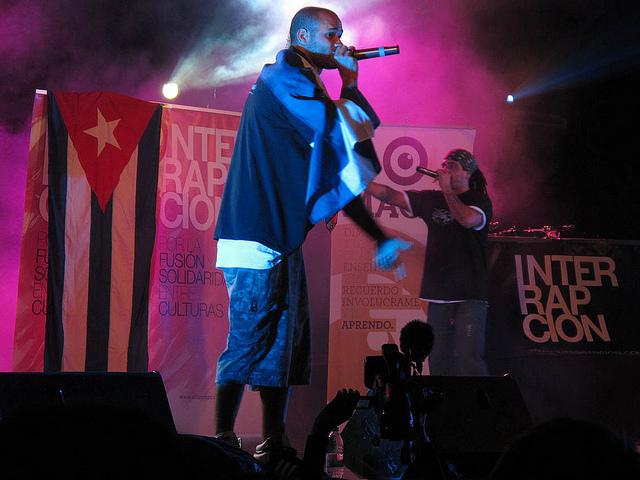 Between 2006 and 2007, I received numerous visits from two State Department officials at my home in Harlem, New York. I had just written a book on Cuban cultural production, with a large section on rap. I was never home when they came, so they left messages with my neighbors, telling them I should urgently contact them. When they finally found me at home one day, I agreed to meet with them at a nearby Starbucks. During the meeting, they wanted to know about my research on Cuban rap. One of the agents, a male, said that he enjoyed Cuban rap, he listened to it frequently and wanted to know what my favorite groups were. The other, a woman, pressed me for more details about my work in Cuba. I didn’t give out any information. I told them that anything I could say on the topic was already written in my book. After this meeting, the harassment continued. I finally sought out a human rights lawyer, Michael Smith. He informed me that it is never advisable to meet with an agent of the government alone, and that if an agent should try to make contact, one should have a lawyer write to the agent on one’s behalf. Smith then sent them a letter saying that I did not wish to speak to them anymore, and that if they had any questions, they could contact him directly. We didn’t hear from them again.

So last week, when the AP news story broke about USAID infiltrating Cuban rap groups between 2009 and 2010, I was not surprised. Infiltration is something that Cuban rappers have been wary of for some time. Navigating the legions of foreign journalists, producers, researchers, and artists has always been a challenge for Cuban rappers, especially during the heyday of the movement in the early 2000s, and there was sometimes a suspicion of people who didn’t enter the scene through someone known to the community. But in the latter half of the 2000s, when many rappers were emigrating and foreign contacts and state support were drying up, Cuban rappers were more vulnerable to the likes of outside actors like USAID, who sought to infiltrate the movement and manipulate it to its own ends.

But the USAID mission to “spark” a “pro-democracy” movement of Cuban rappers was bound to fail for many reasons. Cubans already had a movement. Over the last several decades, Cuban hip hoppers have built a multi-faceted movement that raises issues of racism within Cuban society, provides a channel of expression for Afro-Cuban youth, makes connections with activists and celebrated artists around the globe, and has had a long-lasting impact on Cuban cultural production. It was an organic movement built from the ground up, from the streets and the housing projects. Cuban rap is hope, and anger, and poetry, and no U.S. agency could create that.

The Cuban hip hop movement was not trying to overthrow the Castro government. Artists found ways to work within the system, while making their criticisms in veiled ways, or even openly at times. The “Hip Hop Revolución” that they talk about is one that is in dialogue with the historic Cuban revolution, and youth have been putting pressure on their leaders to live up to the promises of that revolution. Even the younger, more confrontational artists like Los Aldeanos, one of the groups that USAID tried to infiltrate, didn’t see themselves as trying to topple the government. That was never part of their agenda.

Pro-democracy means something completely different to Cuban rappers than it does to USAID. For Cuban rappers, democracy has been about a more full sense of participation and recognition within their society. It has been about being able to influence policy and express their ideas about racism, inequality, and the contradictions that free market policies have brought to an increasingly dysfunctional bureaucratic socialism. It has been about trying to rethink what revolution might mean for the next generation and how they could see that in practice. For USAID, democracy promotion means overthrowing the Cuban government and ushering in a free market regime friendly to the United States. Those two goals have never been and could never be compatible.

The documents secured by the AP reveal a frightening level of manipulation of Cuban rappers by USAID. Like with ZunZuneo, the failed Cuban twitter project also engineered by USAID, the actions of this agency put Cubans at risk of state repression and threatened a closure of the critical spaces that rappers had already built and defended. USAID realizes the power of culture to provide a powerful political voice for young people. What it doesn’t realize is that in a society shaped by successive generations of revolutionary projects, any attempt to engineer a U.S.-affiliated movement from above is destined to be revealed for the farce that it is.

Sujatha Fernandes teaches Sociology at Queens College and the Graduate Center, CUNY. She is the author of several books including Cuba Represent! Cuban Arts, State Power, and the Making of New Revolutionary Cultures (Duke University Press, 2006), and, most recently, Close to the Edge: In Search of the Global Hip Hop Generation (Verso, 2011).