Abducted in Oaxaca: A Journalist's Encounter With Police Repression

It was by chance that I ended up in Oaxaca. But plans changed after interacting with members of a militant teachers’ union, when Oaxacan police abducted me off the street. 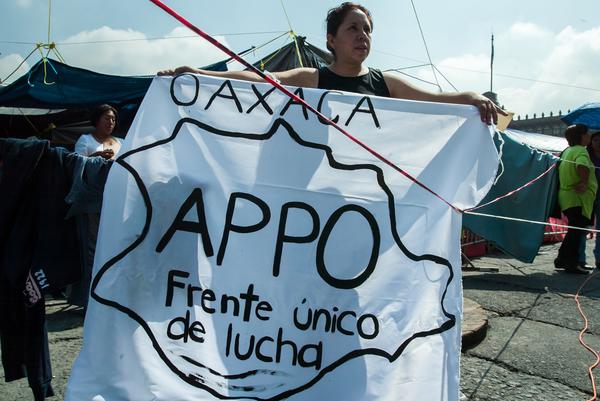 It was by chance that I ended up in Oaxaca. I had a month off from work in July 2013 to travel from Mexico City to Guatemala, with a quick stop in Chiapas to visit friends. Once in Guatemala, I hoped to research communities currently resisting mining corporations in the eastern municipality of Izabal. But plans changed after interacting with members of a militant teachers’ union, when Oaxacan police abducted me off the street.

On my second day in Mexico City, a front-page article in La Jornada caught my attention: teachers had occupied the central square and were protesting proposed reforms to the Mexican education system, including required teacher testing and certification. I jumped in a taxi and headed to the Constitutional Plaza, in the heart of Mexico City, to speak with the teachers.

I met with members from Sección 22 of Oaxaca’s SNTE teachers’ union, who had been occupying the park since May. One of the teachers, Elena Lara, took time to speak with me about the inequalities they were protesting. She said the proposed reforms threatened the jobs of under-supported teachers in Oaxaca—a state already on the peripheries of Mexican Society. With a large indigenous population living on fewer than two dollars a day, families in Oaxaca often choose between eating and paying school fees.

In 2006, what had begun as a labor dispute between the Oaxacan government and Sección 22, erupted into an uprising against Governor Ulises Ruiz Ortiz and his corrupt administration. For months, the Popular Peoples Assembly of Oaxaca (APPO) had governed the city, when federal troops and police were sent in to crush the uprising. Activists were violently evicted from occupied space, and thousands were imprisoned or killed.

Later that night I boarded a bus for Oaxaca, and quickly made contact with the people from Sección 22 in the early morning. I spent most of my first day in their offices. Inside, the walls were plastered with posters of heroes of the revolution: Ernesto ‘Che’ Guevara, Emiliano Zapata, and Pancho Villa. I talked with their press department about current action and preparation for the upcoming community celebration of Guelegueza. That night, I would learn first-hand what the activists were up against.

After spending the afternoon with Sección 22, I walked back to my hostel, stopping briefly on a corner to get my bearings. A white police pick-up pulled up next to me, and in a split second I was surrounded by four large police officers adorned in navy blue jump suits, body armor, masks, and automatic weapons. They began to quietly usher me into the pickup, and I didn’t resist. I was confused more than anything else.

They shoved me into the back seat of the truck, and an officer pressed his elbow into the back of my neck where the skull meets the spine. We drove this way for about an hour, but as the disorientation set in, I could have sworn it was well into the night.

When the truck finally stopped in a nearby town, the officer opened the door and pushed me out into a dark and deserted street. I later learned I was in the outskirts of Oaxaca City. Another officer began to question me.

“Who have you been talking to?” he asked in Spanish.

Without another word, the officer put his hand on his gun and grabbed my backpack. He opened it and saw my Canon 1D Mark II sitting on top. He glared, pushed me away, threw my backpack in the trunk, and they were gone.

All I could think to do was chase the truck. I followed it to the end of the street until it sped off, weaving in and out of traffic. In retrospect, what I would have done if I had caught up is beyond me—they were armed; I had nothing.

So there I stood, at 10 o’ clock at night, outside of the city of Oaxaca. Not only had I lost my camera, passport, cellphone, and cash, but I had also lost all of my notes, jeopardizing my contacts with Sección 22. By a stroke of luck, a kind taxi driver drove me back to my hostel for free.

Five days after my abduction, at the popular cultural celebration Gueleguetza, Victor Ramirez Garcia told me about his own abduction and torture. Victor is a janitor in a Oaxacan school, and an active member of Sección 22. In 2006 he joined teachers and activists who occupied the Zócalo.

“The police would sit in unmarked white pickups around the camp, and randomly pick up people,” Victor said. “Some of them were never seen again, others found themselves in a Federal Prison in the state of Nayarit.”

Toward the end of November, Victor himself would become a victim of police intimidation and violence.

“It was around 4pm when I left the radio station at the university,” Victor said. “A white police truck pulled up and four policemen surrounded me. They forced me into the vehicle and drove off. They held my head down so I couldn’t see where we were. They beat me in the neck, arms, and legs with a metal object from inside the vehicle.”

Beatings and psychological torture continued for four hours inside the truck. At around 8pm, they arrived at a prison in Oaxaca where Victor was held for three days.

“I was afraid,” Victor explains. “Many teachers had disappeared. No one knew where I was.”

Victor is one of the tens of thousands of activists who have been jailed, tortured, or murdered over the years.

In August, I received an email from the Ministerio Publico requesting that I identify the contents of my backpack based on a report I had filed after the incident. I was skeptical, but returned to Oaxaca six months later out of hope and intrigue. After a three-hour venture through the government bureaucracy, my skepticism was affirmed: they had never found my backpack. They wanted proof by receipt that the items were indeed mine.

For Oaxacan activists, repression is still the reality. My own items have now been replaced, but the many lives that have been lost will never be. With the presidency of Enrique Peña Nieto, Oaxaca’s situation will not improve, and the education reforms that have now passed threaten teachers’ livelihoods.

Today, activists and teachers in Oaxaca continue to rebel and resist.

Jeff Abbott is an independent journalist and photographer currently based out of Seattle Washington. He has lived in Haiti and Guatemala, and has covered social movements in Mexico and Guatemala. See his most recent photo essay on the 20th Anniversary of the struggle of the EZLN in Upside Down World.