U.S. Support for Regime Change in Venezuela is a Mistake

When is it considered legitimate to try and overthrow a democratically elected government? In Washington, the answer has always been simple: when the U.S. government says it is.

This article first appeared in The Guardian (UK) on February 18, 2014. Republished with permission. 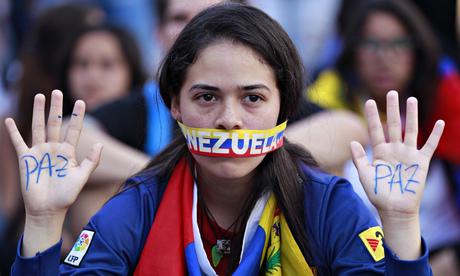 When is it considered legitimate to try and overthrow a democratically-elected government? In Washington, the answer has always been simple: when the U.S. government says it is. Not surprisingly, that's not the way Latin American governments generally see it.

On Sunday, the Mercosur governments (Brazil, Argentina, Uruguay, Paraguay, and Venezuela) released a statement on the past week's demonstrations in Venezuela. They described "the recent violent acts" in Venezuela as "attempts to destabilize the democratic order." They made it abundantly clear where they stood.

their firm commitment to the full observance of democratic institutions and, in this context, [they] reject the criminal actions of violent groups that want to spread intolerance and hatred in the Bolivarian Republic of Venezuela as a political tool.

We may recall that when much larger demonstrations rocked Brazil last year, there were no statements from Mercosur or neighboring governments. That's not because they didn't love President Dilma Rousseff; it's because these demonstrations did not seek to topple Brazil's democratically-elected government.

The Obama administration was a bit more subtle, but also made it clear where it stood. When Secretary of State John Kerry states that "We are particularly alarmed by reports that the Venezuelan government has arrested or detained scores of anti-government protestors," he is taking a political position. Because there were many protestors who committed crimes: they attacked and injured police with chunks of concrete and Molotov cocktails; they burned cars, trashed and sometimes set fire to government buildings; and committed other acts of violence and vandalism.

An anonymous State Department spokesman was even clearer last week, when he responded to the protests by expressing concern about the government's "weakening of democratic institutions in Venezuela," and said that there was an obligation for "government institutions [to] respond effectively to the legitimate economic and social needs of its citizens." He was joining the opposition's efforts to delegitimize the government, a vital part of any "regime change" strategy.

Of course we all know who the U.S. government supports in Venezuela. They don't really try to hide it: there's $5m in the 2014 U.S. federal budget for funding opposition activities inside Venezuela, and this is almost certainly the tip of the iceberg—adding to the hundreds of millions of dollars of overt support over the past 15 years.
But what makes these current U.S. statements important, and angers governments in the region, is that they are telling the Venezuelan opposition that Washington is once again backing regime change. Kerry did the same thing in April of last year when Maduro was elected president and opposition presidential candidate Henrique Capriles claimed that the election was stolen. Kerry refused to recognize the election results. Kerry's aggressive, anti-democratic posture brought such a strong rebuke from South American governments that he was forced to reverse course and tacitly recognize the Maduro government. (For those who did not follow these events, there was no doubt about the election results.)

Kerry's recognition of the election results put an end to the opposition's attempt to de-legitimize the elected government. After Maduro's party won municipal elections by a wide margin in December, the opposition was pretty well defeated. Inflation was running at 56% and there were widespread shortages of consumer goods, yet a solid majority had still voted for the government. Their choice could not be attributed to the personal charisma of Hugo Chávez, who died nearly a year ago; nor was it irrational. Although the past year or so has been rough, the past 11 years—since the government got control over the oil industry—have brought large gains in living standards to the majority of Venezuelans who were previously marginalized and excluded.

There were plenty of complaints about the government and the economy, but the rich, right-wing politicians who led the opposition did not reflect their values nor inspire their trust.

Opposition leader Leopoldo López—competing with Capriles for leadership—has portrayed the current demonstrations as something that could force Maduro from office. It was obvious that there was, and remains, no peaceful way that this could happen. As University of Georgia professor David Smilde has argued, the government has everything to lose from violence in the demonstrations, and the opposition has something to gain.

By the past weekend Capriles, who was initially wary of a potentially violent "regime change" strategy—was apparently down with program. According to Bloomberg News, he accused the government of "infiltrating the peaceful protests "to convert them into centers of violence and supresión."
Meanwhile, López is taunting Maduro on Twitter after the government made the mistake of threatening to arrest him: "Don't you have the guts to arrest me?" he tweeted on 14 February:

Hopefully the government will not take the bait. U.S. support for regime change undoubtedly inflames the situation, since Washington has so much influence within the opposition and, of course, in the hemispheric media.

It took a long time for the opposition to accept the results of democratic elections in Venezuela. They tried a military coup, backed by the United States in 2002; when that failed they tried to topple the government with an oil strike. They lost an attempt to recall the president in 2004 and cried foul; then they boycotted National Assembly elections for no reason the following year. The failed attempt to de-legitimize last April's presidential election was a return to this dark but not-so-distant past. It remains to be seen how far they will go this time to win by other means what they have not been able to win at the ballot box, and how long they will have Washington's support for regime change in Venezuela.