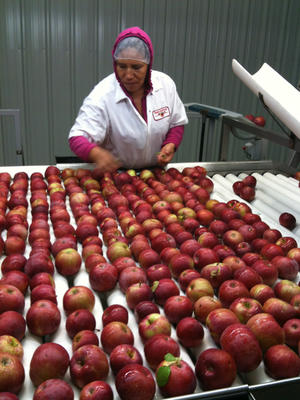 It’s late fall in western New York, and that means the end of apple season. In Wayne County, the center of New York’s apple production, located between the cities of Rochester and Syracuse over 8,000 migrant workers mainly from Mexico, Jamaica, and Haiti arrive during harvest time each year to pick the fruit. Just over 80,000 people actually live in Wayne County year-round, but the migrants who pour into this rural section of New York come for very different reasons.

On a frigid November morning, migrant workers from Mexico are picking the last apples hanging in the orchards at Teeple farms a 350-acre apple farm in the small town of Wolcott. As the workers pick apples they place each one in a metal satchel that hangs by their side from a strap around their backs.

A woman inside an apple processing plant in Wayne County picks out leaves from a shipment of apples bound for the packing line. From there, a computer system analzyes each apple for bruises and a machine selects which apples can and can't be sold.

Levi Bridges is a frequent NACLA contributer and recently spent a year in Mexico City on a Fulbright grant in creative writing to begin work on a book about the life experiences of Latin American migrant workers. He writes at bridgesandborders.com.